An oak tree commemorating the first murder victim of the neo-Nazi Nationalist Socialist Underground (NSU) group has been sawed down in Zwickau, near the Polish border. 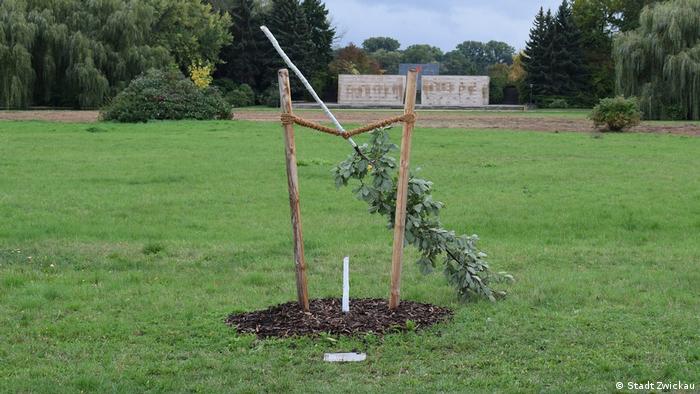 Officials in the eastern German city of Zwickau are investigating the destruction of a public memorial dedicated to the first victim of the National Socialist Underground (NSU), a right-wing extremist terror group that killed ten people in anti-immigrant attacks between 2000 and 2007.

The NSU murders and the resulting court case against the group's only surviving member, who was sentenced to life in prison last year, led to accusations that German authorities had repeatedly failed to take the threat of right-wing violence seriously. The group was uncovered effectively by chance in 2011, when its ringleaders botched a bank robbery and led police to them.

The memorial, an oak tree, was located in a public park in the German city of Zwickau, in the eastern German state of Saxony. It had been planted on September 8 to commemorate Enver Simsek, a flower seller with Turkish roots who was killed in Nuremberg by the NSU in 2000. The city announced on Thursday that the tree had been sawed down.

It is not the first such instance in the city: In 2016 a different memorial to the victims of the NSU in Zwickau was also vandalized.

The NSU terror cell, made up of Uwe Mundlos, Uwe Böhnhardt and Beate Zschäpe, lived underground for many years in Zwickau.

German politicians condemned the destruction of the memorial. Zwickau's mayor, Pia Findeiss, said in a statement, "The sawing down of the tree is a sign of intolerance, a lack of democratic understanding and disrespect toward terror victims and their families."

Angela Merkel's government spokesman, Steffen Seibert, described the incident in a tweet as "simply shocking." He added that the NSU murders remain a reason for shame.

The vandalism of the Zwickau memorial comes as Germany is seeing an uptick in violence and threats from far-right extremist groupings and individuals.

The murder of German politician Walter Lübcke in the central state of Hesse in early June, which is being treated as a politically motivated terror attack, prompted criticism that the German government was once again underestimating the threat of far-right extremist violence. The German police and army have struggled to deal with right-wing sympathizers among their ranks.

Saxony has a history of strong far-right factions within the state. The neo-Nazi National Democratic Party (NDP) has held seats in the regional parliament in the past and the far-right xenophobic PEGIDA movement was launched in the state in 2014.

In the most recent state elections, the far-right populist Alternative for Germany (AfD) took second place, earning 27.5% of the votes. The party's leadership in Saxony belongs to a far-right fringe grouping that has had ties with the neo-Nazi scene.

Currently, the neo-Nazi Revolution Chemnitz group is on trial in Dresden accused of "forming a right-wing terrorist organization" in September 2018.

Suspected far-right terrorist Beate Zschäpe could face life in prison for her role in the killings, but the victims' families are disappointed. They hoped the trial would offer more clarity on what really happened. (06.05.2018)