German military intelligence is probing its KSK elite unit over concerns of widespread far-right extremism. The level of extremist sympathy in the 1,100-person unit is feared to be "extraordinarily high." 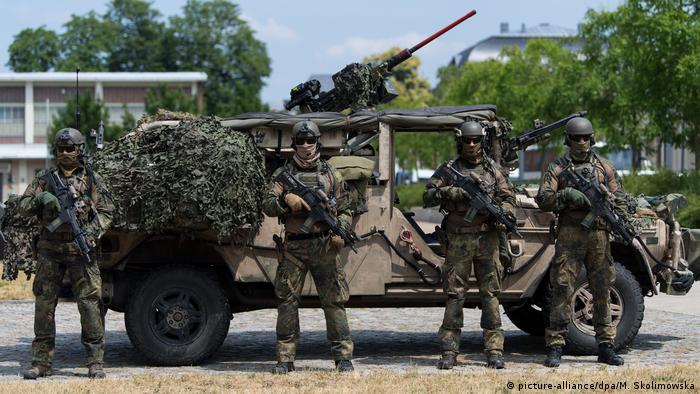 Germany's Military Counterintelligence Service (MAD) is widening its investigation into far-right extremists within the Bundeswehr, Germany's armed forces, German media reported on Tuesday, particularly focusing on the most elite unit in the military, the Kommando Spezialkräfte (KSK), which is based in the southwestern city of Calw.

Newspapers of the Redaktionsnetzwerk Deutschland quoted a confidential memo from Deputy Defense Minister Gerd Hoofe to a parliamentary oversight panel warning that the rising number of extremists in the unit warranted "further investigation."

He also said the probe into far-right extremism within the KSK had become a priority for the MAD.

The Bundeswehr has had several high-profile incidents in recent years relating to the discovery of far-right circles, but this is the first time the KSK has been under particular scrutiny.

Only 1,100 soldiers belong to the group, which is frequently asked by NATO and the United States to assist in joint anti-terror operations in the Balkans and the Middle East.

According to the Redaktionsnetzwerk Deutschland news organization, the problem is particularly bad among paratroopers and known to center around the Franz-Joseph-Strauss base in Altenstadt, Bavaria. The base became infamous in the 1990s when the MAD discovered that soldiers there were celebrating Hitler's birthday and singing the anthem of the Nazi party.

The MAD is probing soldiers who allegedly have links to Franco A., a Bundeswehr soldier who shocked Germany and Austria when he was apprehended in 2017 whilst trying to retrieve a pistol and ammunition he had hidden at the airport in Vienna. Explosives were also found.

Franco A. was charged with planning attacks on high-rank politicians and public figures that the man believed were "refugee-friendly." He was later acquitted of terrorism charges but convicted of weapons violations.

The MAD is also looking into online extremist groups like "North Cross." However, as the MAD is the smallest of Germany's intelligence-gathering services, there are some concerns that it may not have the personnel and resources needed for the breadth of the investigation.

The German Defense Ministry has already indicated that it wants to strengthen the probe.