German media report a lieutenant colonel in the KSK special forces unit has been suspended for right-wing social media posts. His opinions reflected the ideas of the "Reichsbürger" extremist movement. 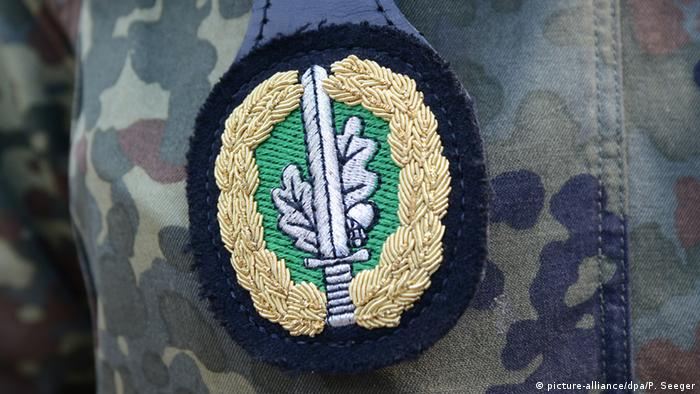 Germany's Bundeswehr has suspended a lieutenant colonel in the elite Special Forces Command (KSK) commando unit on suspicion of right-wing extremism, according to the military's counterintelligence service MAD.

"The person is already known by the MAD," a spokesperson said. "The responsible authorities have already taken disciplinary measures."

The commando, named Daniel K., has received a service and uniform ban. The suspension was first reported by Bild newspaper, which said the lieutenant colonel was being investigated by the MAD for the spread of right-wing extremism on social media."

According to German news magazine Der Spiegel, Daniel K. posted opinions in a closed Facebook group that reflected the ideas of the so-called "Reichsbürger" (Citizens of the Reich), a extremist movement in Germany that rejects the Federal Republic as a state and does not recognize the government. He allegedly demanded in a post that the Federal Presidential Office be abolished.

Der Spiegel said that Daniel K. was flagged by the MAD in 2007 as a KSK captain after he sent a hate letter to a comrade, for which he received disciplinary sanctions.

Extremism in the Bundeswehr

The KSK, a unit of about 70 soldiers, made headlines last year after a farewell party for a company commander featured a soldier demonstrating the Hitler salute and right-wing rock music.

The MAD said a few weeks ago that it would be screening the Bundeswehr more closely for supporters of the Reichsbürger movement and the doomsday prepper scene. According to MAD, the number of right-wing extremist cases in 2018 was 270, down from 379 the year before. However, suspected cases of references to Islam in the Bundeswehr increased from 46 to 50 last year, and references to foreign extremism rose from 22 to 35.

German authorities are unsure how to deal with the new rise of the populist right, according to a leaked paper. The boundaries between extremist margins and the "decent, middle" of society are dissolving. (22.11.2016)