Violent crimes motivated by xenophobia rose slightly in Germany last year, the country's domestic intelligence agency has reported. The agency has been accused of blindness to neo-Nazi terrorist cells in the country. 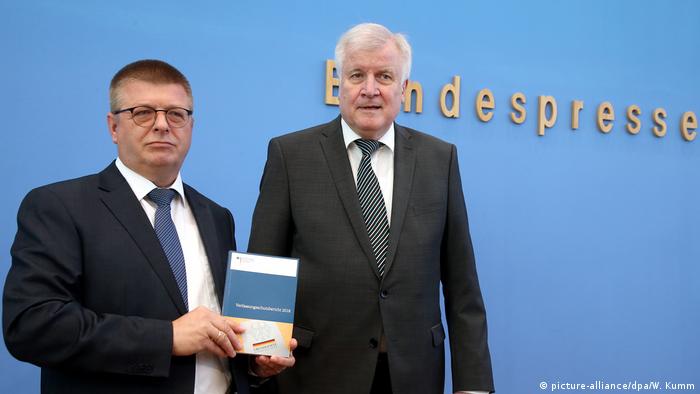 That marks a new upturn after the number of crimes dipped in the wake of a high point during the "refugee crisis" of 2015 and 2016. There were also a total of 6 attempted homicides categorized as right-wing extremist crimes in 2018, the report found, up from 4 the year before.

This year's BfV report has come at a particularly sensitive moment: On Thursday morning, police made new arrests in the ongoing investigation into the killing of Walter Lübcke, a conservative politician who had become a target for extreme-right hate speech and death threats over his support for Chancellor Angela Merkel's refugee policy in 2015.

The main suspect, Stephan Ernst, who confessed to the killing this week while in custody, is known to have neo-Nazi sympathies and connections to various far-right organizations. German media investigations in the weeks after his arrest found he had a history of violent crime against immigrants, including a stabbing and the attempted pipe bombing of refugee housing, both in the early 1990s.

The new arrests, of two men alleged to have supplied Ernst with weapons, have led to concerns that he was part of a terrorist cell similar to the National Socialist Underground (NSU), a trio of neo-Nazis who committed ten murders, as well as several bombings and bank robberies, over an eight-year period.

Read more: Rise in neo-Nazi crimes a legacy of the NSU terrorist cell

At Thursday's press conference, Seehofer reiterated his "shock" at Lübcke's death and pledged that all the relevant security forces would carry out a thorough investigation into whether Ernst had a support network. Seehofer also rejected the accusation, often repeated in the wake of the NSU case, that the domestic security agency was "blind" to the threat of neo-Nazi terrorism, either now or in the past.

"The problem we have is when we say we will improve, it is understood as a criticism of the past, or that we were asleep before," he told reporters. "Of course it's natural that one always tries to improve, to stay good."

While Haldenwang described the politician's killing as a "turning point" for the security services, he also said that a number of reforms inside the BfV had been introduced in the wake of the NSU murders. Those reforms, he said, took place under his predecessor Hans-Georg Maassen — who was dismissed amid controversy over his remarks about a video apparently showing migrants being attacked in Chemnitz.

Anetta Kahane, head of the Amadeu Antonio Foundation, an NGO that tracks and counters far-right extremism, said it was "surprisingly good" that the BfV report acknowledged the existence of far-right terrorism and interconnected neo-Nazi networks in Germany.

But she questioned how, precisely, the agency determined which extremists were "violence-oriented" and which were not. "It's so speculative; the criteria aren't clear," she told DW.

Lübcke's death has sent a shockwave through Germany's political establishment, with Foreign Minister Heiko Maas calling for a new campaign initiative along the lines of the climate protection campaign "Fridays for Future."

Under the motto (and social media hashtag) "Thursdays for Democracy," Maas called on citizens to speak out against internet hatred aimed at local politicians. "This cannot be accepted," Maas told the ARD public broadcaster on Thursday morning.

The foreign minister also wrote an open letter to all members of the German Bundestag, inviting them to show support for local politicians on their social media platforms under his hashtag. "I am absolutely convinced that the great majority in our country wants Germany to be an open and tolerant country," he said.

But Maas' letter was not sent to MPs of the far-right Alternative for Germany (AfD), on the grounds, as he put it, that the party had shown that it wants to "take advantage" of hate speech, rather than stop it. During a Bundestag debate on the Lübcke case on Thursday, the AfD's Gottfried Curio countered by accusing the other parties of using the killing to defame his own party.