The former head of Germany's domestic intelligence, Hans-Georg Maassen, has been put on "non-active status" by the interior minister. The move follows a series of controversies surrounding the ex-spy chief. 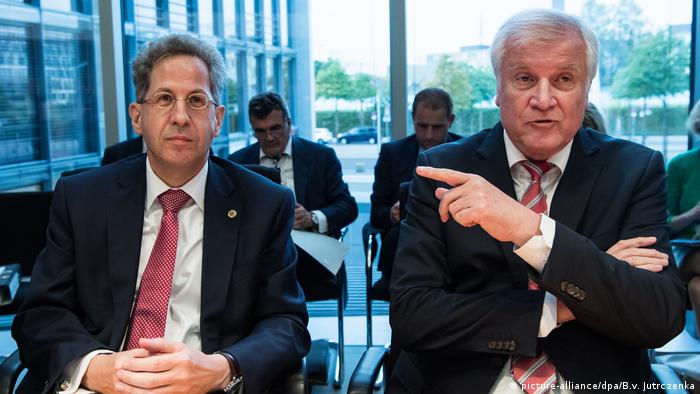 German Interior Minister Horst Seehofer said on Monday that he was temporarily relieving former domestic spy chief Hans-Georg Maassen of his duties after Maassen made "unacceptable remarks" in a farewell speech to representatives of international intelligence agencies. Seehofer, who has previously supported Maassen, said that a "cooperation based on mutual trust" was no longer possible in view of the remarks.

Maassen's critical view of the government's policy on refugees, as further revealed in the comments he made in the speech on October 18, has highlighted and contributed to rifts within Germany's coalition over the past few months.

In his address, Maassen spoke about "radical left-wing elements" in the Social Democratic Party (SPD), the junior partner in the ruling coalition, who had, he said, seized gladly upon his controversial remarks about protests in the eastern city of Chemnitz in August to provoke divisions in the government.

He also criticized Germany's current policies on refugees and security as "naive and leftist."

The text of the speech was made available on the intranet of the domestic intelligence agency BfV, from where it made its way into many hands.

Maassen, 55, came under fire from several quarters when he questioned well-documented reports of far-right violence against foreigners during the Chemnitz protests. There have also been media reports that he passed sensitive information about Islamic extremism to the anti-immigration and anti-Islam Alternative for Germany (AfD) party.

The outcry prompted the government to fire Maassen as the head of the BfV.  An initial compromise between Chancellor Angela Merkel's Christian Democrats (CDU) and the SPD would have seen Maassen essentially promoted to deputy interior minister. But that deal met with such opposition both from politicians and the public that he was instead to be made a consultant reporting directly to Seehofer.

"The firing is overdue, but has come too late to repair the damage that the Groko has done to itself with the Maassen affair," she told AFP news agency, using a common German abbreviation for "grand coalition."

"The interior minister is fully responsible for this disaster," he said, adding that Maassen himself had made thousands of BfV staff jointly liable "for his conspiracy theories and resentment toward politics and media."

The AfD responded to the news by offering Maassen the chance to join its ranks.

"He would fit well into a democratic, constitutional party like the AfD," chair Jörg Meuthen told newspapers of the Redaktionsnetzwerk Deutschland, and also described Maassen as "a conscientious, excellent and thorough public official."