The far-right party told members to refrain from using words such as "ethnicity inversion" to avoid being placed under special surveillance. One hard-line AfD leader has said those fears were akin to "wetting the bed." 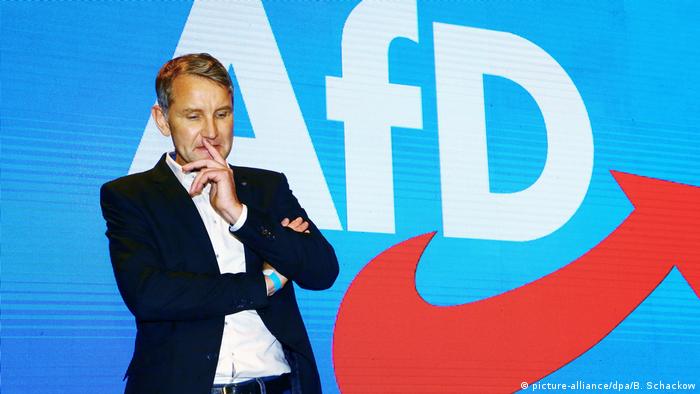 Politicians from across the political spectrum have called for Germany's domestic security services to monitor the far-right Alternative for Germany (AfD) party following reports that the AfD leadership had told members to avoid using certain politically charged language.

In an internal report seen by German media, the AfD leadership warned members that they risked monitoring by the Office for the Protection of the Constitution if they used words or phrases such as "foreign infiltration," "ethnicity inversion," or "refugees are criminal."

Patrick Sensburg from the governing conservative Christian Democrats (CDU) called attention to the report on Saturday and said the AfD should be monitored. He told the German business newspaper Handelsblatt the report shows how AfD members aim to "hide" the "true content" of their beliefs to avoid monitoring.

The deputy leader of the Social Democrats (SPD), Ralf Stegner, said the revelation showed how the far-right AfD was "actively fighting" Germany's constitutional order and added that security services should be keeping special tabs on the populist party.

Konstantin von Notz, the deputy leader of the Green Party in the German parliament, said the report showed how the AfD leadership had "self-diagnosed" an "extreme radicalization" among its members.

Fears and 'wetting the bed'

The internal report was the latest indication of growing fears within the AfD about possible monitoring. The party's regional chapter in Lower Saxony had issued similar recommendations earlier in the week.

The party's youth wing is set to vote Sunday on whether to dissolve its state chapters in Lower Saxony and Bremen after regional security services announced they would begin monitoring members there.

The head of the AfD in the central state of Thuringia, Björn Hocke, nevertheless said on Saturday that concerns about the party being monitored were akin to "political bed wetting."

Party members in Thuringia re-elected the 46-year-old, who is considered a representative of the AfD's extreme right-wing, with just over 80 percent of the vote.

'The AfD is stoking people's fears'