Germany should have a weekly protest against right-wing extremism similar to "Fridays for Future," Foreign Minister Heiko Maas has said. He claimed that far too often, Germans turn a blind eye to right-wing terrorism. 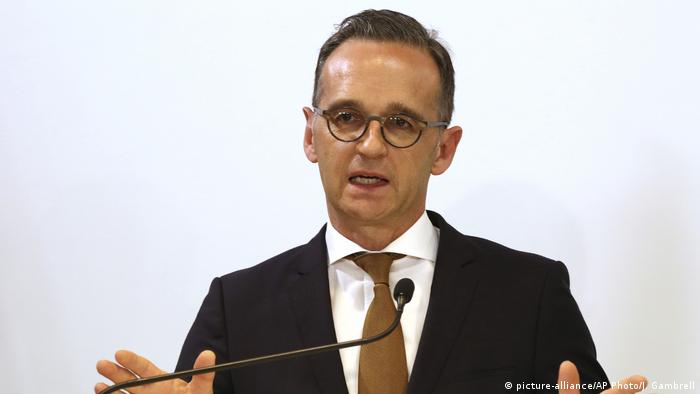 German Foreign Minister Heiko Maas has called for protests against right-wing extremism, claiming in an op-ed published in the Saturday edition of Bild newspaper that Germany "has a terrorism problem."

In the editorial, Maas responded to the recent murder of a German district president, Walter Lübcke, as well as death threats directed towards pro-migrant politicians Henriette Reker and Andreas Hollstein, the mayors of the western German cities of Cologne and Altena respectively.

"All this shows what many still close their eyes to even now: Germany has a terrorism problem."

Maas proposed a Thursday protest for democracy, similar to the "Fridays for future" climate change protest, where Germans "show that we are more than right-wing radicals, anti-Semites and dividers."

Maas said Germany had more than 12,000 violent right-wing extremists, but 450 of them were able to stay underground "even though they are wanted with an arrest warrant."

The German foreign minister said that Germans turn a blind eye to right-wing attacks and that right-wing terrorism should be identified as such.

"Far too often, there has been talk of 'individual cases' or 'rampages' when it comes to attacks from the right," Maas said. "Terror is terror. There is nothing to relativize."

Maas called on Germans, as advocates of democracy, to "draw clear boundaries," saying that "democracy dies with indifference."

Also on Saturday, the Tagezeitung newspaper published the names of 195 people who had died as a result of right-wing violence in Germany since 1990. The list appeared on the publication's front page with the headline: "Lübcke is not an isolated case."

On June 2, Lübcke, the president of the regional council of the central German city of Kassel, was found dead at his home. Police arrested a 45-year-old suspect two weeks later and federal prosecutors are investigating the killing under the assumption that it was politically motivated.

Last month, Germany's Interior Ministry revealed that politically motivated crimes in Germany decreased for the second straight year in 2018. However, it found a rise in anti-Semitic and xenophobic hate crimes, mostly committed by right-wing perpetrators.