Global executions on the decline, says Amnesty International | World | Breaking news and perspectives from around the globe | DW | 12.04.2018

Amnesty International's latest annual report has found that fewer executions were carried out around the world in 2017 than the year prior. The number of people sentenced to death also went down.

Oluwatosin Popoola, who monitors capital punishment for Amnesty, said the decrease had to do with the fact that Iran, Saudi Arabia and Pakistan — the three countries that carry out the most executions worldwide — executed fewer people in 2017. Iran carried out 11 percent fewer executions, according to Amnesty, while Pakistan put 31 percent fewer people to death.

The reasons behind the declines in those countries are varied. "In Iran, for instance, the drop can be traced to judicial reforms for dealing with drug-related crime," Popoola told DW. He says it is more difficult to explain the reductions when it comes to Pakistan and Saudi Arabia. The only thing that is clear is that "executions [in 2017] have decreased after recent peaks." Amnesty also recorded a 20 percent drop in Egypt. 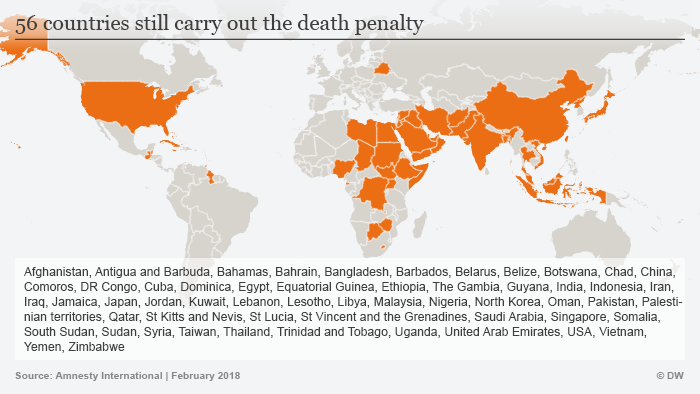 Still, the organization warns those numbers do not tell the whole story: They are based on the minimum number, that is, those that could be confirmed beyond doubt. The true number of people executed last year is believed to be higher. In all, 23 countries around the world executed individuals in 2017.

The findings also highlight a massive blind spot. Amnesty opens its report by stating that executions in China, the country that puts the most citizens to death globally, are not included in its figures. "The true scale of death penalties carried out remains unknown since data is classified secret," the report explains. "The number of 993 worldwide executions does not include the thousands of people likely executed in China."

Excluding China, Amnesty says that 84 percent of all executions documented worldwide were carried out in Iran, Saudi Arabia, Iraq and Pakistan. 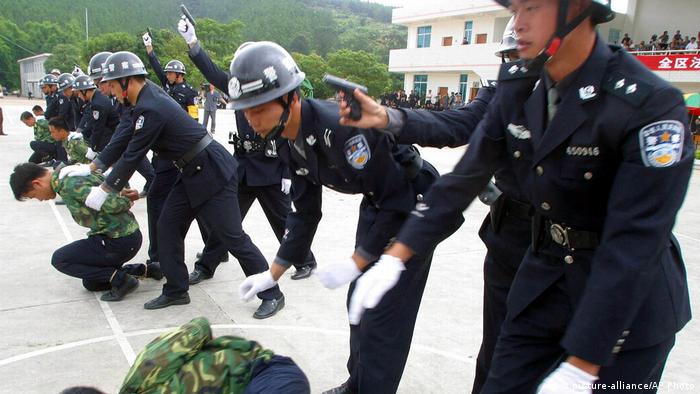 Popoola says authorities in Iraq "continue to resort to the death penalty as a tool of retribution in response to public outrage after attacks claimed by armed groups, including the group calling itself the Islamic State. Mass executions were carried out on several occasions during the year, with dozens of men being executed in September."

A number of countries actually resumed executions in 2017: Bahrain, Kuwait, the United Arab Emirates and Jordan.

One positive Amnesty points to in its report is sub-Saharan Africa. Guinea, for instance, abolished the death penalty. The Gambia called a moratorium, promising that the next step would be abolition. Popoola says the region is currently a "hub" as a result for the drop in executions.

Globally, countries are carrying out fewer executions. In 2016 more than 3,100 people were sentenced to death, in 2017 that number dropped to roughly 2,600. In total, Amnesty recorded almost 22,000 cases of prisoners still on death row around the world.

Death penalty not a deterrent

Amnesty prefaced its report with a quote from United Nations Secretary-General Antonio Guterres: "The death penalty does little to serve victims or deter crime." 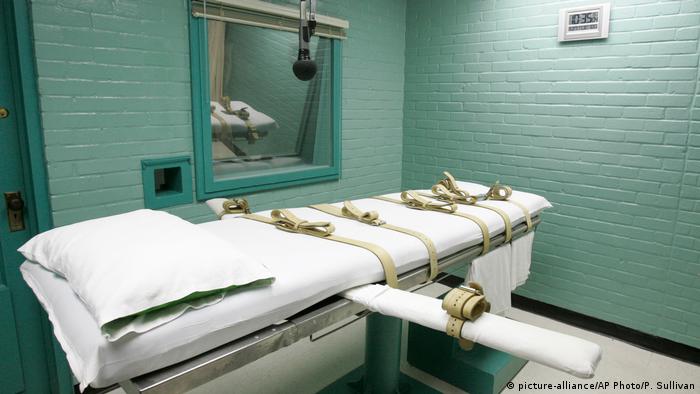 According to Popoola, there is no credible evidence to suggest that capital punishment is a stronger deterrent than other sentences: "For example in Canada, the homicide rate in 2016 was almost half that in 1976, when the death penalty was abolished there."

Popoola says efforts must now be concentrated on working toward abolishing the death penalty in those countries that still practice it, and he has concrete proposals for doing so. Such countries, he says, "can immediately establish an official moratorium on executions with a view to abolishing the death penalty. They could commute, without delay, all death sentences" and "remove prisoners from death row," putting them into normal prison settings instead. He adds that those countries could also "immediately remove from their laws any death penalty provisions, which are in breach of international human rights law."

Overall, Amnesty says the 2017 statistics provide a ray of hope: "These important developments confirm that the world has reached a turning point and that the abolition of this utterly gruesome, inhumane and degrading punishment is within reach."

Lucy Graham, Amnesty Deputy Director of Global Issues, on trends in the numbers of death sentences around the world