Pakistan: Man sentenced to death for rape, murder of 7-year-old

A Pakistani man has been handed four death sentences for a rape and murder that shocked the country. Many in Pakistan, including the murdered girl's parents, have called for a public execution. 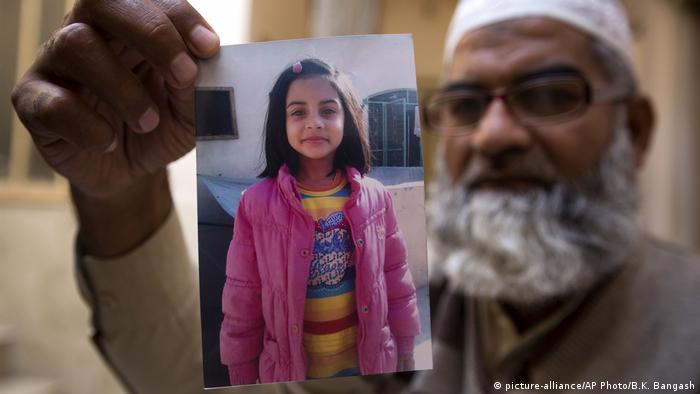 A Pakistani court on Saturday sentenced a 24-year-old man to death on four counts for the rape and murder of a 7-year-old girl in a case that sparked nationwide outrage.

State prosecutor Ehtesham Qadir said Imran Ali, who had pleaded guilty during the five-day trial, was in the courtroom for the verdict. No journalists were allowed inside the courtroom.

"The court handed down death on four counts and life imprisonment to Imran Ali in the rape and murder of the little girl, Zainab Ansari," Qadir said.

Ali faces further charges in the cases of at least seven other children attacked in the Punjab city of Kasur, several of whom were killed. He has confessed to all eight attacks.

Ali was arrested in January, two weeks after the body of 7-year-old Zainab Ansari was found in a garbage dump in Kasur, about 340 kilometers (210 miles) south of the Pakistani capital, Islamabad.

Local residents said the murder was the 12th such incident over the past year.

Hundreds of local residents protested after Zainab's body was discovered, and two were killed when police fired shots to break up the crowd.

Ali was a neighbor of Zainab, and closed-circuit video footage from the day Ansari was abducted shows her walking off calmly with a man.

The girl disappeared during the first week of January while walking to a nearby home for Quranic studies. Her parents had gone to Saudi Arabia for a pilgrimage at the time, and she had been left with relatives.

Ali said he lured the girl by saying that her parents had returned and she should go with him to meet them.

On hearing of their daughter's disappearance, the parents quickly returned home, but by that time Zainab's body had been found and preparations for her funeral and burial were underway amid tight security.

A number of children have gone missing in the Kasur district since 2015, when police say they uncovered a pedophile ring tied to a prominent local family. So far at least two people have been convicted in that case. Police say hundreds of children in the district were abused.

Zainab's case has sparked debate in Pakistan about whether children should be taught to guard against sex abuse, a subject that is generally taboo in the majority Muslim country.

Many Pakistanis, including Zainab's parents, have demanded Ali be publicly executed.

"I want him to be hanged publicly at the place where he took Zainab," the mother told reporters after the verdict.

Angry at alleged police inaction in the investigation of a 7-year-old's rape and murder, two people were killed during protests in the Pakistani city Kasur. But Zainab Ansari isn't the only girl to have died there. (11.01.2018)

A war crimes court in Cambodia has delivered its last verdict regarding the murderous 1975-1979 Khmer Rouge regime. Only five of its leaders have been prosecuted over the deaths of a quarter of the country's population.