Pope Francis: 'Death penalty is neither human nor Christian'

The pope's statement came from inside a Roman prison during an annual pre-Easter ritual. Francis has taken the toughest stance against capital punishment of any pope in the history of the church. 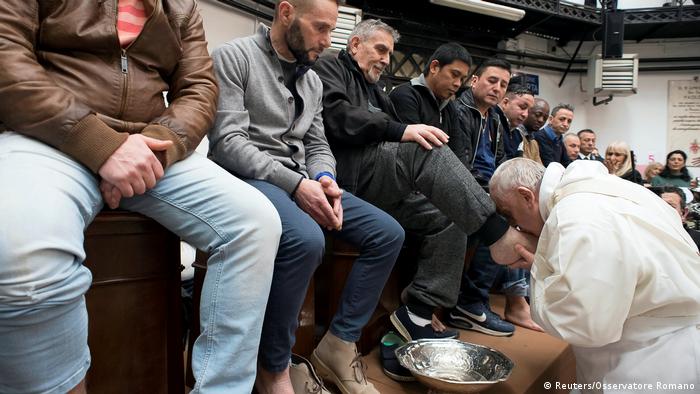 Pope Francis made an impassioned statement against the death penalty on Thursday during a pre-Easter foot washing ritual in Rome. The pontiff spoke from the city's Regina Coeli prison, where he met with inmates after the ceremony.

"A punishment that is not open to hope is not Christian and not human," said Francis during his sermon to the prisoners. "That is why the death penalty is neither human nor Christian."

The pope also spoke about the humility of Jesus as exemplified by the foot washing ritual, and said that if world leaders would practice the same, there would not be as many wars.

According to Christian tradition, Jesus washed the feet of his apostles on the Thursday before Easter. The practice has fallen in and out of use amongst popes, and was most recently revived by John XXII in 1959.

Although Francis is not the first to wash the feet of the destitute – Pope John Paul II often washed the feet of orphans and the homeless – Francis has eschewed tradition by traveling to institutions to carry out the ritual, rather than doing it in the splendor of the Vatican.

He has also broken with custom by washing the feet of women and non-Christians. Of the 12 male inmates whose feet he washed on Thursday, two were Muslim and one was Buddhist.

The Catholic Church tacitly allowed capital punishment in extreme cases for centuries, but that began to change when Pope John Paul II was elected in 1978. Since his ascension in 2013, Francis has pushed to include a clear statement against the death penalty in the Church's universal catechism.

Pope Francis has attributed new miracles to Archbishop Oscar Romero and Paul VI, paving the way for their sainthood. Paul VI oversaw major reforms to the Catholic Church, while Romero was an advocate for human rights. (07.03.2018)

Pope Francis has officially declared a feast day for celebrating the Virgin Mary as the "Mother of the Church." It is the latest feast day Francis has instituted to honor women in the church. (04.03.2018)