Although an immediate end to the partnership with Merkel's CDU is off the table, the SPD's newly installed leaders remain "skeptical about the future of this grand coalition." 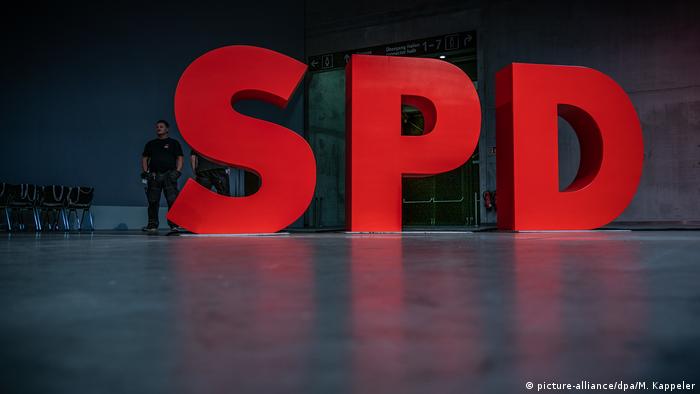 Saskia Esken and Norbert Walter-Borjans were confirmed as leaders of Germany's Social Democrats (SPD) on Friday at the beginning of the party's three-day conference in Berlin.

Esken won a 75.9% share of the vote, while new co-leader Walter-Borjans received 89.2%. The pair were initially elected by the party's 400,000 members last week, but that decision needed verification at the party conference.

The big talking point of the day, however, was the future of the coalition government and though Esken had reservations she was willing to give it a try.

She told delegates at the conference: "I was, and am, skeptical about the future of this grand coalition. But with this resolution, we give the coalition a realistic chance of continuing — no more, no less."

Esken's comments came as the majority of SPD delegates voted against a motion to quit the partnership that has been in place since the 2017 election.

The surprise election of two little-known members from the party's left wing as the SPD's new leaders sparked concerns about the collapse of Chancellor Angela Merkel's coalition government. They have since ceded some ground after initial calls for an immediate exit from the alliance — but it is unclear how long that will hold if the party turns further to the left, particularly as tensions were running high among the SPD's 600 delegates after party heads backtracked on a promise to put the future of the coalition up to a vote.

Party members will continue to debate over the next 48 hours about what concessions they want from conservatives to continue in the coalition until 2021.

A further shift to the left could be on the horizon if a leader of the youth wing, Kevin Kühnert, is elected as one of the party's new deputy leaders.

In their speeches, the two leaders demanded more social justice. The SPD must lead the welfare state into the 21st century, said Esken, as she called for an overhaul of the country's benefits and welfare program, known as "Hartz IV."

Hartz IV was introduced in 2005 by then Chancellor Gerhard Schröder in a bid to significantly tighten the rules for claiming welfare or unemployment benefits. Since then, the rate of unemployment in Germany has gradually decreased, except for a temporary setback following the 2008 financial crisis.

Esken also appealed for the creation of a basic child welfare scheme.

Walter-Borjans advocated more measures for climate protection. The conservation of the future must not be delayed, he said.

He also spoke out against a "militarization of foreign policy."

Who are the new leaders?

Norbert Walter-Borjans, known as the "Robin Hood for taxpayers," is a former finance minister of the western state of North Rhine-Westphalia. The 67-year-old trained economist is known for cracking down on tax evaders in the state.

Saskia Esken, a 58-year-old trained IT specialist, has been a federal lawmaker in Germany's lower house of parliament, the Bundestag, since 2013. She is mainly known in Berlin for using her skills to help drag Germany into the digital age on parliamentary committees.

What's going on with the coalition?

Walter-Borjans and Esken emerged as strong critics of the alliance with the conservative CDU/CSU bloc. They threatened to pull the SPD out if the conservatives did not renegotiate part of the coalition agreement — a move firmly rejected by CDU/CSU leaders. They also vowed to put the future of the coalition up to a vote during the SPD's party conference.

That threat appears to be off the table following pressure from senior SPD members like Finance Minister Olaf Scholz — who lost an internal election to lead the party. Instead, the new party leaders reportedly agreed to a draft motion that calls for dialogue with the conservatives on issues including climate change, raising the minimum wage and stabilizing the economy.

Bleeding support: The party conference comes after a series of dismal electoral results for the SPD, which caused former leader Andrea Nahles to quit the post in June this year. Current opinion polls put the party at 13%, trailing in fourth place behind Merkel's conservatives, the Greens and the far-right Alternative for Germany (AfD).