Germany is governed by a coalition of Angela Merkel's CDU, its sister party CSU, and the center-left SPD. Many want to rethink the relationship, but CDU chief Annegret Kramp-Karrenbauer has rejected the idea. 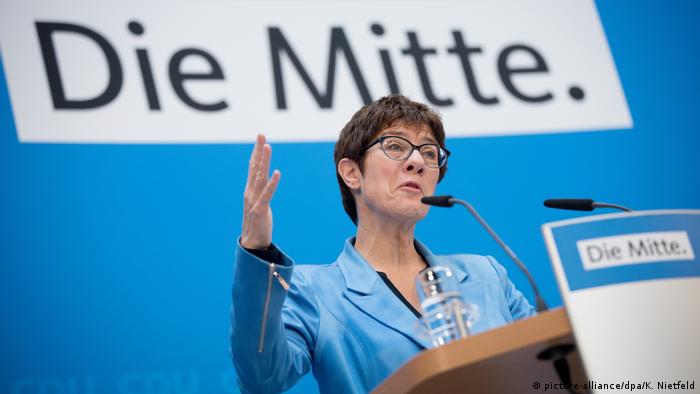 "The coalition agreement stands and by no means will it be reopened to debate," she told German newspaper Welt am Sonntag in a report published Sunday.

Her statement is a response to several conservative and Social Democrat politicians who in recent weeks had questioned the agreement holding together Angela Merkel's current government, known as the "GroKo," or grand coalition.

"At our party conference, we will make clear what our country should and will look like in the future," said Kramp-Karrenbauer, "and how we will set the right course, how we can best solve the problems of people in Germany."

In a report in the Frankfurter Allgemeine Zeitung (FAZ) newspaper on Friday, the leader of the conservatives' pro-business wing, Carsten Linnemann, called for discussions between Germany's conservative alliance — made up of the CDU and its Bavarian sister party, the Christian Social Union (CSU) — and the center-left Social Democrats (SPD) to be reopened in December.

The parties need to "sit together, rework the coalition agreement, and decide how they can bring the country forward," he said, adding that it was "nonsense, in these fast-paced times, to negotiate an agreement for the next four years."

CSU General Secretary Markus Blume echoed Linnemann's sentiments. In light of the fundamentally changed economic and political environment, "we need an update for the GroKo, with new ideas, new agreements and with a new spirit," Blume told FAZ.

Points to be reconsidered included, among others, the conservative party's recommendation that Germany reinstate a year of obligatory public service for all high school graduates.

The idea found support with other politicians, including Saskia Esken, one of the candidates to take over the SPD.

'No reason to leave the government'

But many also opposed the move to reopen negotiations.

"We have a coalition agreement. Now we'll execute it," CDU General Secretary Paul Ziemiak told reporters, adding that the administration would react to any new developments.

The premier of the German state of Lower Saxony, Stephan Weil, said that a majority of SPD members "see no reason to leave the government."

"I feel like a part of this majority," the told the DPA news agency.

Conservative party members will gather next week in Leipzig for their annual conference. The SPD is set to meet a week later. Both parties will vote on the future of the alliance.