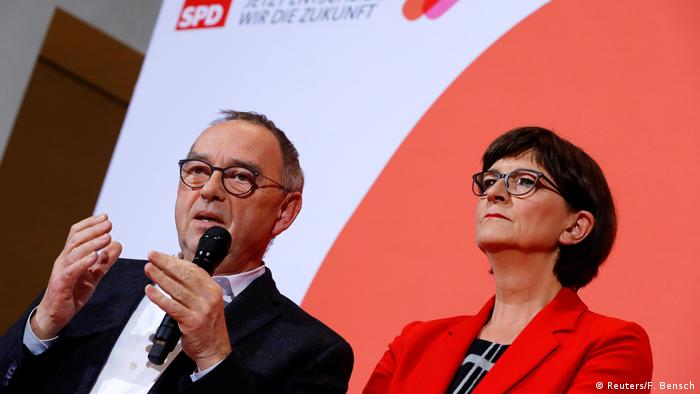 Vice Chancellor Olaf Scholz, who is also finance minister, and his running mate, Klara Geywitz, were soundly beaten, obtaining only 45.33% of the vote from the party's rank and file. Both back staying in the coalition until the next national elections in 2021.

Instead, party members chose challengers Norbert Walter-Borjans and Saskia Esken, who have been strongly critical of the alliance with Merkel's conservatives.

Some 425,630 members were eligible to take part in the vote. The election result still needs to be confirmed at a party conference slated to run from December 6-8.

Should Walter-Borjans and Esken be endorsed as party leaders, their first order of business will be a decision on whether to remain in the coalition government.

Many party members are in favor of leaving the government and rebuilding support for the party in the opposition. That would likely trigger new elections or pave the way for a weak and uncertain minority government.

Opposition to remaining in the coalition came from the ultimately victorious candidates Walter-Borjans, a former state finance minister, and SPD lawmaker Esken. The two said they would be willing to leave the coalition unless Merkel's conservatives renegotiated their coalition agreement — something the CDU has rejected.

The SPD is desperate to try and win back voters following a series of electoral losses and plunging support in opinion polls.

"Whoever wins this membership poll will deserve the full support of the entire party," Foreign Minister Heiko Maas, an SPD member, told the Deutsche Presse-Agentur news agency ahead of the results.

"We need absolute unity to credibly back up our stance on social justice," he added.

The first round of the leadership vote failed to generate enthusiasm, with only around 53.3% of party members taking part.

During Germany's general election in 2017, support for the party slumped to its lowest level since 1933.

Current opinion polls put the party at 14%, trailing in third place behind Merkel's conservatives and the Greens and only just coming out ahead of the far-right Alternative for Germany (AfD).

Germany's oldest political party has decided to adopt a twin-leader model in as part of its attempt to regalvanize the party base. The Social Democrats are tanking in opinion polls and casting around for fresh ideas. (24.06.2019)