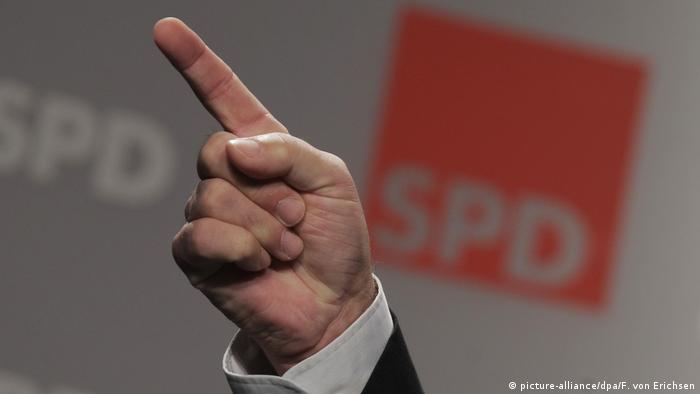 Who would have thought it? The Social Democrats (SPD) have voted for revolution. Norbert Walter-Borjans and Saskia Esken, two party members who, up to this point, had been relatively unknown, are set to become the new SPD chairs. That was the narrow, but unmistakable, result of the party's leadership election. Both clearly belong to the party's left and have made no secret of the fact that they don't support a continuation of the current grand coalition with Chancellor Angela Merkel's Christian Democrats (CDU) and its Bavarian sister party the Christian Social Union (CSU).

Those who, until now, have had a say in the running of the SPD have been duped — federal and state ministers alike. Ahead of the vote, the party's crop of senior politicians had explicitly backed another pair contesting the leadership, Finance Minister Olaf Scholz and Brandenburg state politician Klara Geywitz. And no wonder. The two candidates had pledged to stay in the governing coalition until the next scheduled election in fall 2021. Who wants to give up power and influence?

Another pledge was to restore peace to the government. Given that Germany will assume the EU Council presidency in 2020, and given the poor polling results of the SPD and CDU, neither party is keen to hold an early election. Anyone who has made it to the front row, and thus has much to lose, has no interest in political suicide.

Norbert Walter-Borjans and Saskia Esken are different. He is 67 years old and had practically retired. She is 58, has only been politically active for a few years and isn't heavily involved in the SPD's parliamentary group. Both are convinced that the SPD is only in such a weak position because it's moved too far towards the political center. They want to bring the party back to its social democratic roots, heralding a new beginning with a radical change of course.

Party conference one week away

That's what they'll call for at the SPD party conference next weekend when delegates are set to officially approve the leadership. The duo's endorsement is considered a sure thing. But what will be exciting to watch is how long it will take Esken and Walter-Borjans to push for the SPD's withdrawal from the grand coalition, and how they go about it.

The party conference is supposed to decide on the future of the grand coalition. The new leaders are set to put forward their own recommendation for that future. Esken has previously insisted that the SPD leave the partnership. But she's since changed tack, calling instead for the coalition agreement to be renegotiated. This step, which the conservatives have so-far refused to take, could be seen as an attempt to blame the CDU/CSU for the Social Democrats' political failings. If the coalition partners don't yield, the SPD would have no choice but to pull out.

Of course, it's unlikely that the CDU/CSU will agree to the state unconditionally financing the unemployed, immediately increasing the minimum wage to at least €12 ($13) or introducing a wealth tax on the super-rich. But the SPD demand to strengthen the climate package might stick, particularly because the federal states are also calling for it.

These aren't good prospects for Germany. Instead of turning its attention back to the work of government, the SPD will likely continue to focus on itself, and in doing so, paralyze the coalition. That will also give the Christian Democrats the time and opportunity to revive an inner-party dispute over the party leadership and candidacy for chancellor, which they had only just, with much difficulty, put to rest — at least provisionally.

Whether CDU/CSU or SPD, everyone might end up losing in the end — especially if it comes down to a new election. Chancellor Angela Merkel could try and maintain some semblance of stability with a minority government, at least for the duration of Germany's EU Council Presidency stint in 2020. But after that, the end would inevitably come.

The Greens stand to profit most from a new election, if current opinion polls are anything to go by. The Left party, which sees the new SPD leaders as natural allies, also has reason to hope. But Saskia Esken and Norbert Walter-Borjans will also have to win in their own party. At the grassroots level, one in two voted for them, but nearly one in every two backed Olaf Scholz and Klara Geywitz. And, as already mentioned, the entire party establishment is against the new chiefs.

It's doubtful whether they will simply give up their resistance and close ranks behind the new leaders. That's never happened in the SPD before. What's more likely is that the SPD's right won't stay in the state of shock triggered by the leadership vote and won't simply watch on as Esken and Walter-Borjans try to shake up the party.

Read more: Is socialism the future for Germany's ailing SPD?

Edging towards the abyss

Instead, it is quite conceivable that in the coming weeks and months, the SPD will quarrel and break apart in an internal struggle for the party's direction — and to such an extent that even more voters will walk away, and the oldest German political party will end up disappearing into political nirvana.

That's not a desirable outcome. But, with the SPD, anything is now possible.