So much for reinvention: It's grand coalition 3.0 for Germany's Social Democrats. Many grass-roots members want renewal along the lines of the UK's Labour Party, but would that work here? 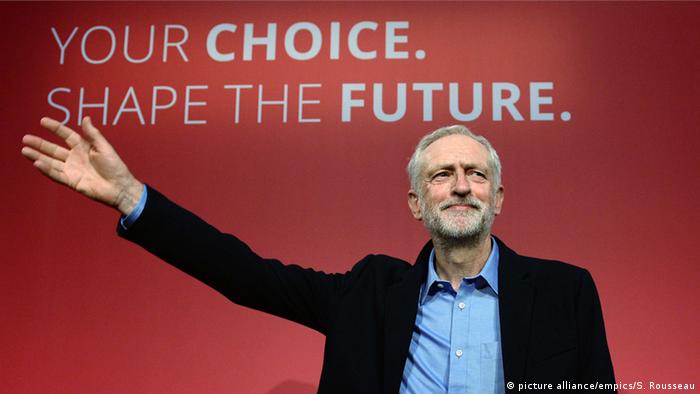 "Being drawn along by it, carried under, carried away, by its long-term membership."

Those familiar with the Canadian band The Tragically Hip will recognize those lyrics from the song "Membership." So are Germany's Social Democrats (SPD) suddenly "tragically hip?" Judging by the influx of new party members — around 24,000 since the beginning of the year — the answer is yes. Whether it's long term is another matter.

The problem for the party's leadership is that many of those new members have made no secret of the fact that they're joining in order to scupper the SPD's participation in a grand coalition.

Now that a deal has been agreed with the Christian Democrats (CDU) and their Bavarian sister party, the Christian Social Union (CSU), the SPD's rank and file — around 460,000 members — will get to play kingmaker on whether to back it. 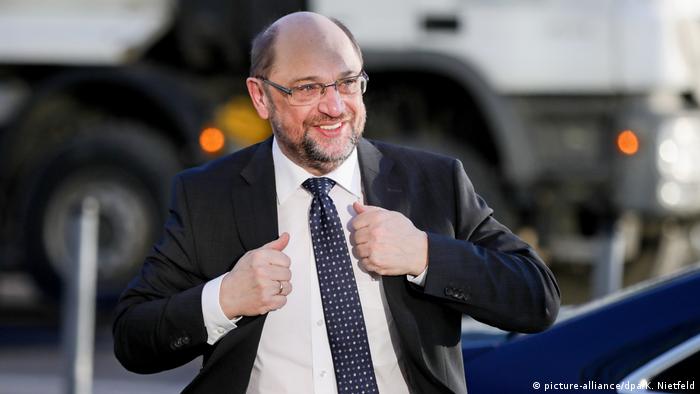 Cast your mind back to the beginning of last year, when, for a fleeting moment, former European Parliament President Martin Schulz experienced his "Jeremy Corbyn moment." He won the party leadership with an unprecedented 100 percent of the vote and breathed new life into a moribund party. Giddy from the rush, the party convinced itself it could pull off a surprise victory in the election as Schulz, with his no-nonsense style, ate into Chancellor Angela Merkel's seemingly unassailable lead.

But once his novelty had worn off, he struggled to identify the right policy issues to attack Merkel — not helped by the fact that the Christian Democrats have essentially claimed the ground the SPD used to walk on.

"What happened with the Schulz bounce was basically curiosity in the German population about who he is. He had quite an interesting mix which was completely new. He was accused of being a European bureaucrat, but then he always came up with his story of being mayor of Würselen [small town near Aachen]," says Henning Meyer, research associate of the Public Policy Group at the London School of Economics.

"He didn't manage to use that moment of curiosity to fill it up with an agenda that could have carried him through to the election."

The rest is history: A drubbing at the election, a U-turn from rejecting another grand coalition to again assuming the junior role in said coalition, to a weakened former party leader who's gone from ruling out a cabinet post under Merkel to pursuing the foreign ministry role to dropping his bid following scathing criticism from his own party. 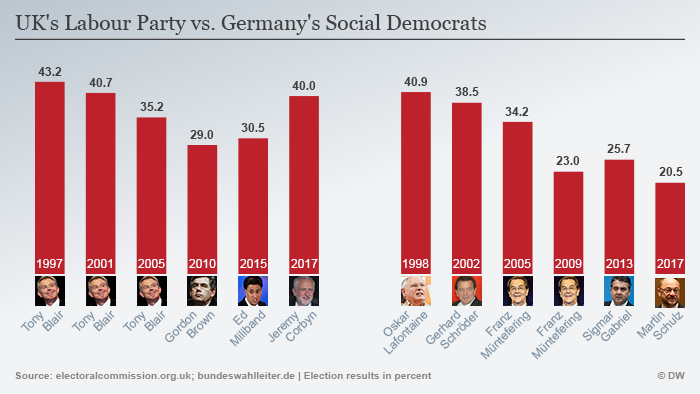 Ridden by infighting, the Social Democrats have cast envious glances across the Channel at one of their brethren. Against the odds, Labour Party leader Jeremy Corbyn managed to pull off three quite remarkable victories in a row. In 2015, with the party in disarray after a disastrous election result, he was elected party leader thanks largely to young activists who paid 3 pounds (€3.40, $4.15) to register as Labour supporters and take part in the leadership contest even as non-members.

In the wake of the UK's EU referendum, the party establishment tried to ditch Corbyn over his perceived lukewarm opposition to Brexit. Again, he managed to mobilize young registered supporters, who carried him to another leadership victory. Last year he pulled off arguably his biggest coup when Labour won 40 percent of the vote in the general election.

So is there a lesson to be learned here for Germany's Social Democrats? Not really, Meyer told DW. "I see a lot of lazy comparisons out there. I don't think the Labour Party experience gives a lot of insight to the SPD at the moment." He also puts into perspective the SPD's recent membership surge. "Labour went up from 190,000 members in May 2015 to 515,000 in July 2016. So they more than doubled in the space of just one year."

Can the SPD gather momentum?

At the grass-roots level, the SPD still has plenty to do, says Steve Hudson, co-chair of the #NoGroKo grass-roots initiative, who was also active in the UK's Momentum, the network that evolved out of Corbyn's 2015 election campaign.

"The thing about Momentum is that it was just set up as a campaign to get Corbyn elected leader of the Labour Party. It had no money and just a couple of volunteers, and they did digital things mostly because they were young people." 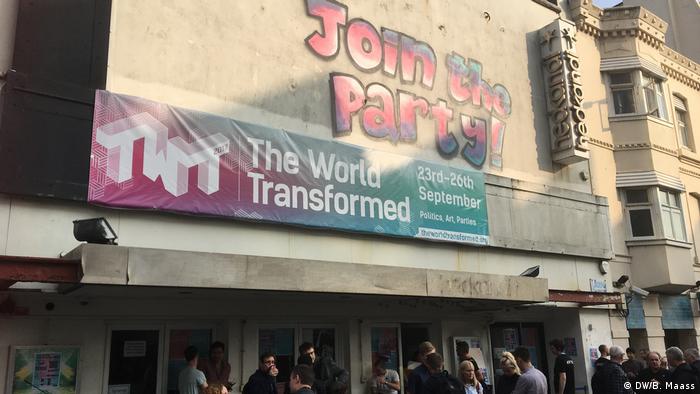 He says the notion that Momentum were merely social media savvy and that if only the SPD could tap into that reservoir it would reverse its fortunes is not true. "The reason Momentum did so well on Facebook is because the political content of what they were saying, offering a genuine change, inspired a whole generation of people."

And that, says Hudson, is the problem with the SPD.

"It's not like suddenly you do some stuff on Facebook and then they're going to shoot through the roof. The SPD has to fundamentally turn around and stand for genuine political alternatives and not for more of the same."

There seems to be a sense, however, that a new philosophy may emerge, albeit gradually. "The dynamic of what we're experiencing now is very similar to the beginnings of Momentum. So these people, I think, want a very different SPD. They're not just joining because they think it's great. They're joining because they want to change it and transform it and they want to get involved."

There are four state elections set for this year for the German parties to fight. While the high-flying Social Democrats want to consolidate their power, the conservative Christian Democrats need to win back voters.