Germans see Chancellor Merkel as a force of stability in a crisis-ridden world, a recent survey has shown. Despite her popularity, a majority are dissatisfied with her government but not enough to back early elections. 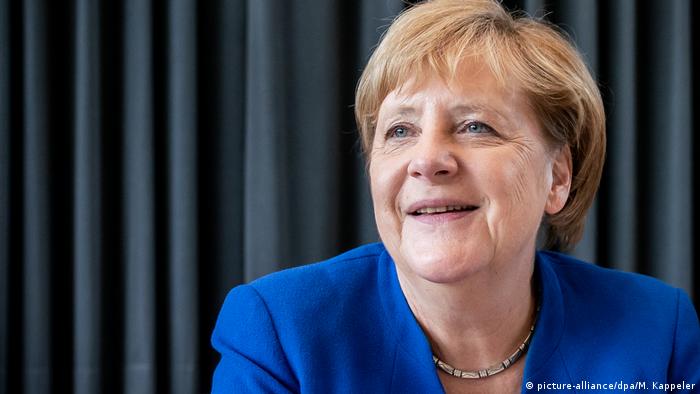 Most Germans said they backed Chancellor Angela Merkel and would like to see her complete her term until the next parliamentary elections are held in 2021, according to a recent poll by broadcaster ARD released on Thursday.

The survey results came as Merkel's Christian Democratic Union (CDU) and her Social Democratic Party (SPD) governing partners have seen their vote share sink at the national and regional levels and as smaller parties like the far-right Alternative for Germany (AfD) and the Greens have surged.

Despite a shifting climate for political parties, Merkel still commands a majority approval of 56%, making her the most popular politician in the country. Foreign Minister Heiko Maas of the SPD came in second with 43% of approval among voters.

Merkel was seen by 58% of Germans as the reason why things were going well in their country, despite the various crises facing the world today. A majority of respondents from nearly all parties felt this way, with the notable exception of AfD voters, who disagreed by 78% to 22%.

Although Merkel still enjoys a high approval rating, some 33% of Germans said they were satisfied with her governing coalition, while 67% were dissatisfied.

More troubling, 74% of respondents felt that people were not getting a lot out of the many promises that the federal government has made. Some 94% of AfD voters felt this way, but even 59% of CDU and 63% of SPD backers agreed.

Nonetheless, Germans were not ready to ditch the coalition anytime soon. A majority of 61% said the government should stay in office until the 2021 parliamentary elections.

When asked how they would vote if the elections were held Sunday, Merkel's CDU would come in first with 27%, followed by the Greens with 23% and the AfD would come in third with 15%.

The SPD would be the most hurt by the results, registering another historic low of 14% percent, compared to their 20% showing in the parliamentary elections of 2017.

Fears of polarization and climate change

The survey also gauged respondents' anxiety about the current political climate and the future of the country.

Climate change, a topic that has helped propel the Green party to its recent successes, was a major concern for Germans.

Some 76% of respondents were very worried that a changing climate was destroying their way of life. This view by all parties with majorities above 70%, except for AfD voters, 53% percent of which said they were not concerned.

When it came to current politics, 83% of Germans were worried that their country was becoming more polarized and 74% were worried that political parties were not able to find common answers to important issues.

Respondents were split about the future of their country's society. A slight majority of 54% said they were afraid that German culture and its language would be lost in the future, while 47% did not share that concern.

Conservative voters felt more concerned about cultural change, with 58% of CDU voters and 92% of AfD voters expressing this view. Only 30% of Greens and 28% of Left party voters were concerned about the loss of Germany's culture and language.

The success of the AfD was a "double slap in the face" to Angela Merkel, but not the "earthquake everyone feared." DW rounds up the international reactions to the state elections in Saxony and Brandenburg. (02.09.2019)