German Finance Minister Olaf Scholz narrowly got the most votes in the SPD's leadership ballot on Saturday, but he will face a second round. The SPD is currently in a ruling coalition with Chancellor Angela Merkel's CDU. 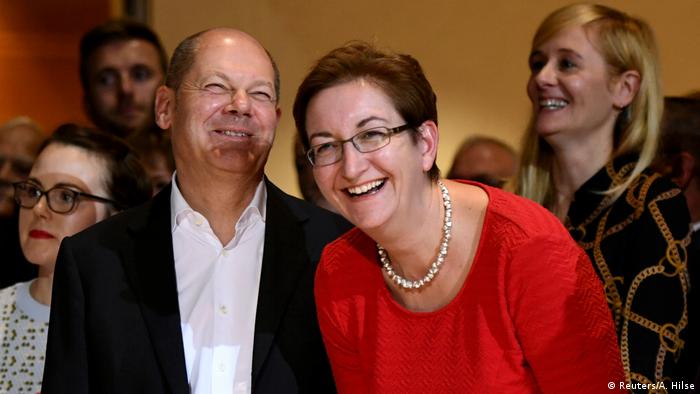 Finance Minister and Vice Chancellor Olaf Scholz and his running mate, Klara Geywitz, received the most votes in a members' ballot to elect the new leader of Germany's Social Democrats.

The new leader will be instrumental in deciding the future of Germany's ruling coalition. Scholz and Geywitz are the only candidates who said they would stay in the coalition. Their opponents in the second round, Norbert Walter-Borjans and Saskia Esken, are more skeptical about the future of the coalition.

Scholz and Geywitz received 22.7% of the vote, closely followed by former North Rhine-Westphalian Finance Minister Walter-Borjans and his running mate, Esken, who received 21%.

No candidate reached the necessary 50% to avoid a runoff ballot in November. Scholz and Geywitz will be pitted against Walter-Borjans and Esken in this second round. All other candidates have been eliminated.

Germany's oldest party is currently in coalition with Chancellor Angela Merkel's CDU, but the new leader could choose to end the coalition.

Second-place contenders Walter-Borjans and Esken are uncertain about the future of the coalition. The grand coalition was agreed in 2017 and was expected to remain in place until the next general election, which is not due to be held until 2021.

Although the leader will officially be decided by delegates at a party conference in December, that vote is largely seen as a formality. SPD's fate hangs in the balance

The center-left party is currently polling at around 14%, a historic low. The party has been leaderless since June, when Andrea Nahles resigned following poor EU election results.

Scholz has been vice chancellor and finance minister since 2018 and previously served as mayor of Hamburg, labor minister under Merkel in a previous coalition and the SPD's general secretary under Merkel's predecessor, Gerhard Schröder.

Walter-Borjans appealed to the left of the party and has been lauded for his work to uncover tax evasion.

About 53.3% of the 425,000 SPD members voted in the election, which took place online and by mail over two weeks. Twelve candidates ran, all on joint tickets.

Merkel wants German Social Democrats to stop thwarting Ursula von der Leyen's bid to lead the EU Commission. Many officials domestically and across the bloc say the defense minister's bid for the job was forced through. (12.07.2019)