AfD members have rejected a bid by a more extreme faction of the party to gain a greater say in policy direction. The relatively moderate Jörg Meuthen was reelected as co-leader, along with a compromise candidate. 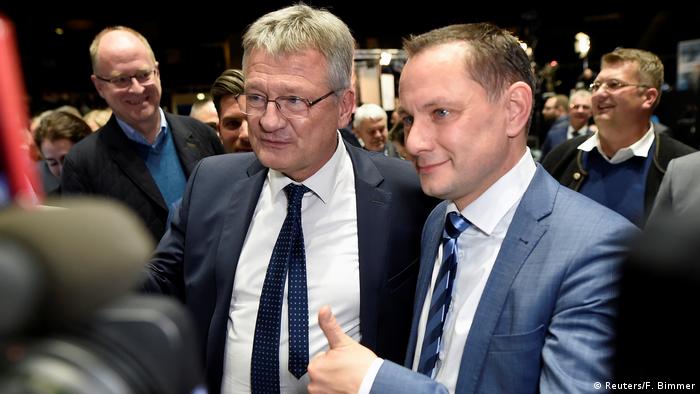 The right-wing Alternative for Germany (AfD) on Saturday opened a two-day conference where, as it seeks to build on recent election successes, it rejected a swerve to the extreme right.

Internal power struggles had been expected to dominate the halls of the conference center, where 600 party delegates, in addition to choosing co-chairs, were voting on 13 members of the executive committee.

An extreme-right faction known as the Wing (Flügel) had been hoping to boost its representation on the executive council and make a bid to swing the leadership in its direction.

The two-day gathering in the city of Braunschweig comes on the heels of state elections in eastern Germany in recent months that saw the AfD surge to second place in Saxony, Brandenburg and Thuringia with more than 20% of the vote.

Meuthen used the moment to revel in the declining support for Germany's traditional center-left Social Democrats and center-right Christian Democrats.

"We are experiencing the implosion of formerly dominant forces with the simultaneous strengthening of new forces ... I believe that government-building without us will become more and more difficult, until it does not work at all anymore," he said.

All parties represented in Germany's federal and state parliaments have refused to work with the AfD.

As Meuthen expressed ambitions to enter government, some 20,000 protesters gathered outside the conference. Some shouted "all of Germany hates the AfD" and "no place for Nazis."

Extreme right of the AfD

The Wing's influence in the AfD has been strengthened after two of its key figures — Björn Höcke and Andreas Kalbitz — scored significant electoral victories in regional elections in eastern Germany this year. By some estimates, up to 40% of party members are sympathetic to the Wing, giving them a prominent role in choosing the executive council and co-leaders.

Chrupalla, who won the support of 54.5% of delegates, was viewed as a compromise candidate acceptable to moderates and radicals. He was ultimately able to battle off a challenge from a more hard-line lawmaker, Gottfried Curio.

At a press conference, Chrupalla disputed the idea that the AfD used incendiary rhetoric to win votes, saying "we have used reason" to gain centrist voters, which "requires no drastic language."

Founded in 2013 as a euroskeptic party, the AfD has drifted to the right as it seized on the 2015 refugee crisis to promote an anti-Islam, anti-foreigner and pro-family program. Despite scoring above 20% in eastern Germany, it has stalled nationwide at about 13-15%.

Moderates within the party want to appeal to a broader political base and disgruntled voters by shedding its far-right image in a bid to capture support from other parties, particularly the ruling conservative Christian Democrats and their center-left Social Democrat coalition partners.

The battle over the future direction of the AfD is not only a strategic question, but an existential one.

It comes as Germany's domestic intelligence agency has put some local AfD offices under further scrutiny. There is great concern within the party that its national associations could be put under observation if it swings too far to the extreme right.

Members of Germany's far-right populist AfD visited Syria to prove that the country is a "safe country of origin" for migrants. They also aim to increase economic ties between Germany and the war-torn country. (22.11.2019)

Voters delivered big gains to the far-left and far-right in Sunday's elections in the eastern German state. DW examines why the unprecedented results matter for the stability of the country — and Europe. (28.10.2019)

The former head of the far-right AfD, Frauke Petry, has announced her Blue Party will dissolve. The new party failed to capture conservative and right-wing votes in two state elections. (06.11.2019)

In a move unprecedented in modern German history, lawmakers on Wednesday stripped a far-right politician of his role as a parliamentary committee chair. He had made comments widely condemned as anti-Semitic. (13.11.2019)