Voters went to the polls in Saxony and Brandenburg, two states in Germany's former east. The far-right AfD has become the second biggest party in both regions. 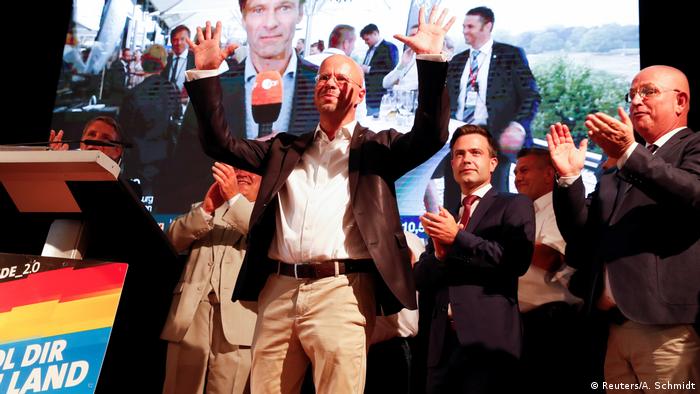 Preliminary official results  in regional elections in Saxony and neighboring Brandenburg have indicated that the center-right and center-left will stay on top despite their decline in popularity.

Voters of all stripes feeling left behind

Although the AfD's support remained about the same as it was in both states during the national elections in 2017, party leader Alice Weidel celebrated the results on Twitter, proclaiming that the nationalists are "a people's party" and thanking voters. The AfD has used voter discontent over immigration policy to build strength in the former East Germany, which remains its stronghold.

A poll from public broadcaster ARD found a majority of voters from every party except the Greens in Saxony felt like they were considered "second-class citizens" compared to western Germans:

State Premier Michael Kretschmer (CDU) said "thank you for all our support from all over Saxony, especially our young people."

Combined, the two states make up less than a 10th of Germany's total population, although Saxony is the most populous state from the former East with more than 4 million residents. It's home to the cities of Chemnitz, Dresden and Leipzig.

Despite holding on in Brandenburg, the SPD fell to a historic low of only 7.7% of the vote in Saxony. The center-left has seen its supporters migrate to the Left and the Greens on one side and the CDU on the other.

SPD General Secretary Lars Klingbeil said the stagnating results for the AfD indicated that "the people do not want the AfD as the strongest power." He also congratulated the party in Brandenburg for remaining the strongest party in the state.

AfD may push for vote rerun

The AfD in Saxony has said it will push for Sunday's result to be declared invalid, after legal troubles left them with too few candidates to fill their seats in the state parliament. Their 27.5% result should give them 38 seats, but the state constitutional court slashed their list from 61 candidates to 30, citing formal mistakes in the way the lists had been drawn up.

However, it's possible the AfD will still end up with 38 people able to take seats, if the party wins enough of the direct contests in each voting constituency to plug the gap.

"We said before the election that we would in any case take the matter to court, as far as the cutting of the list is concerned," said Jörg Urban, the AfD's top candidate in Saxony, in an interview with regional public broadcaster MDR.

Germany's Green party could score record results in Sunday's elections in the eastern states of Brandenburg and Saxony. But they'll have to contend with the rise of the far-right Alternative for Germany. (01.09.2019)