Germany's oldest political party has decided to adopt a twin-leader model in as part of its attempt to regalvanize the party base. The Social Democrats are tanking in opinion polls and casting around for fresh ideas. 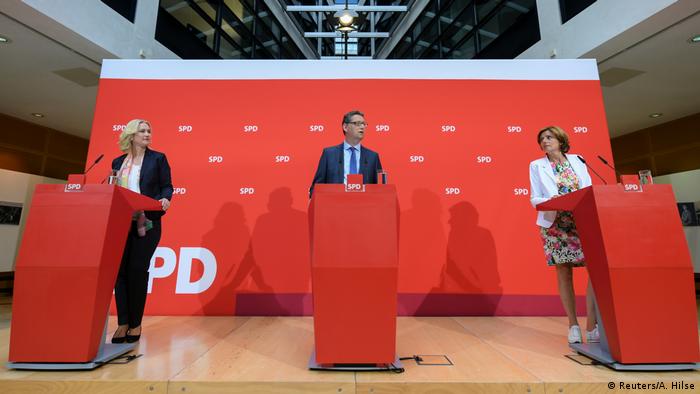 Germany's center-left Social Democratic Party (SPD) decided on Monday to adopt a "double leader" model, with one man and one woman to lead the party.

The SPD is fighting to maintain its relevance for German voters after close to six years as junior partner in Chancellor Angela Merkel's government coalition. Those years have seen its vote share in Germany shrink from 25.7% (in the 2013 national election) to 15.8% (in this year's European Parliament election). Some opinion polls have the party that once claimed 40% of German voters currently languishing at 12%, neck-and-neck with the far-right Alternative for Germany (AfD) and way behind a resurgent Green party at 20%.

The resignation in early June of party leader Andrea Nahles in the wake of the party's dismal EU election showing has left a vacuum at the top of the SPD that few leading party figures appear willing to fill. Nahles' move apparently took place beneath a cloud of inner-party recrimination, and so far leading Social Democrats including Finance Minister Olaf Scholz, Labor Minister Hubertus Heil, and Lower Saxony State Premier Stephan Weil have all declined to sip from the poisoned chalice. 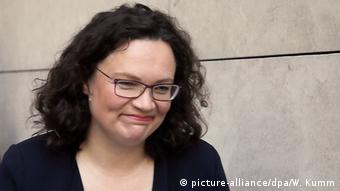 The beleaguered party is due to elect a new leader in October and is currently under the interim leadership of three senior politicians (who have also ruled themselves out of taking over permanently): Malu Dreyer, state premier of Rhineland-Palatinate, Manuela Schwesig, state premier of Mecklenburg Western-Pomerania, and Thorsten Schäfer-Gümbel, head of the SPD in Hesse. All three of them held a press conference on Monday laying out how the next leader, or leaders, would be chosen, with candidates given till September 1 to register.

But the pressing question for the SPD appears to be: not how, but who? One of the more outspoken members of the party, Martin Dulig, Economy Minister in the state of Saxony, where the SPD is currently polling in an abysmal fifth place, admitted to the Welt newspaper on Monday that the current national leaders looked a little "burnt out."

This, as Gero Neugebauer, political scientist at the Free University of Berlin said, was partly down to the fact that the national leaders were associated too closely with Merkel's government. Many political pundits — some in the party — blame the SPD's decline on the suffocating effect of Merkel's chancellorship, during which she adopted many of the SPD's policies.

"You work on the assumption that you have to choose someone who can't be linked to the old problems of the SPD," he told DW. But the alternative is to pick someone from the local government — a successful mayor, for example. That would mean, as Matthias Micus, SPD expert at the Göttingen-based Institute for Democracy Research, picking a leader with little experience. "The skills of a successful mayor are not those of a party leader," he said.

The Greens: Germany's New Number One?

The initial push for the new double-leadership model came from the SPD's women's organization, the Working Group of Social Democratic Women (ASF), though it quickly won the support of its influential leaders.

But Neugebauer was unimpressed with the notion, arguing that "the defenders of this idea are fascinated by the success of the Greens" — a party that has long had two co-leaders, one male and one female.

But the new SPD leadership must show voters more than musical chairs or lip service to equality, the expert cautioned: "I think most people are aware that swapping people doesn't make a difference for the SPD if these people aren't associated with a clear political orientation."

Micus, on the other hand, thinks a double leadership makes a lot of sense for the Social Democrats. "The SPD is an enormously heterogeneous party when it comes to its voters," he told DW. "This integration can't be achieved by one person alone."

Meanwhile, Thomas Oppermann, the SPD's parliamentary leader, has suggested an even more drastic measure to make the party relevant again: allowing non-SPD members to vote elect the leader of the party and/or the chancellor candidate.

His plan would allow anyone willing to chip in €5 ($5.70) get a say in who takes over the party. The idea, he said, was to pick leaders who "appeal not just to people in the party, but also to the population."

This, Oppermann admitted to the Funke Media Group, would be a "brave step," but "without courage and the readiness to take risks, without trying out new paths, the SPD will not emerge from its cellar. But if we show our openness and offer real participation, we will make the SPD a social project once again."

Micus said that was fundamentally a good idea, but he warned that it had already been tried in other countries by other center-left or socialist parties, but had little effect when the vote wasn't tied to the political program. That may prove to be the SPD's biggest problem — regardless of who leads it.