The resignation of Social Democrat leader Andrea Nahles makes early elections in Germany more likely. But both the CDU and the SPD should avoid any hasty decisions, says DW Editor-in-Chief Ines Pohl. 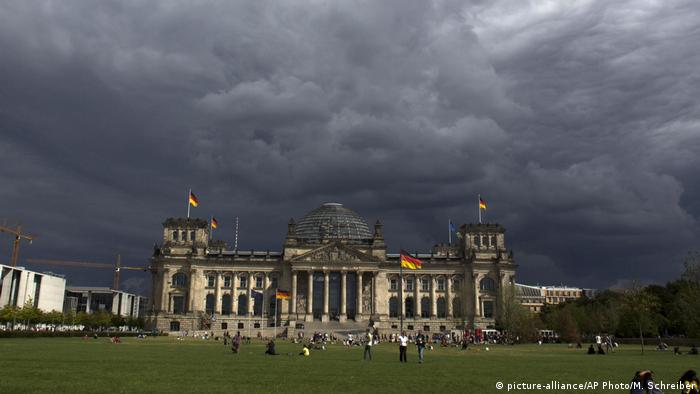 The results of the European Parliament elections a week ago triggered a political earthquake in Germany, the devastating consequences of which are now being felt.

Sunday's announcement by Social Democrat leader Andrea Nahles that she will resign from her positions of party and parliamentary leader is far more than an internal problem for Germany's SPD. It's a symbol of the crisis that has befallen the SPD and Chancellor Angela Merkel's Christian Democrats — the two main parties that between them have been responsible for each elected chancellor since the founding of the Federal Republic.

Neither party currently has the stability necessary to take on the real responsibility of leadership. This is true with regard to both their policies and their personnel.

First, the Christian Democratic Union: Since Merkel stepped down as party leader after the CDU made a poor showing at state elections, the political infighting in her party has careered out of control.

Annegret Kramp-Karrenbauer, the new party leader and Merkel's potential successor, cuts a rather unfortunate figure. Her pandering to the most right-wing elements of the conservative CDU/CSU bloc during the European election campaign did not benefit the party — indeed, quite the opposite.

And the public relations disaster that she triggered by slamming a YouTuber who had criticized her party in a widely seen video was even more serious. Here, too, her attempt to display toughness by calling for stricter regulation of the internet backfired completely. She did not damage just her own image but that of the entire party, making it seem old, worn-out — anything but fit for the future.

SPD: Looking for its place

For the Social Democrats, the situation is even more complicated. For six years, the party has been the junior partner in the "grand coalition" and unable to counter the chancellor's clever maneuvers with ones of its own. Whether minimum wage or child care: Merkel has always succeeded in taking the political credit for nearly all the reforms initiated by the SPD.

Rather than coming up with its own policies and solving the fundamental problem of finding a place for itself in the German party landscape, the SPD has indulged in infighting and constant leadership changes.

And now the current SPD leader is to step down from both her positions. This means anything is possible. The SPD has reached such a low point that many are simply calling for an end to the horror known as the "grand coalition," no matter the cost.

But that is dangerous. What if early parliamentary elections were actually to take place this year? Neither the SPD nor the conservatives have convincing figures at the top. Neither party has an election platform robust enough to address the concerns of German citizens. The issue of climate protection is just one of those concerns, even if it's currently the loudest.

At the moment, Germany is standing on firm democratic footing. Even if fresh elections were to be called, there is no danger of right-wing nationalists or populists winning governing majorities. That's the good news in these turbulent times.

Germany's role in the world

In view of the important role Germany has to play in the world, however, infighting and party intrigue must not be allowed to determine what happens in the coming days. Both the SPD and the CDU would be well-advised to take their time, draw the right consequences and not shoot from the hip.

For now, Germany can stay politically stable and remain a reliable partner for its international allies only if those in charge think about the future political consequences — and not just about keeping political power in the present.

Germany's major parties have slumped again in the elections for the European Parliament, with the Social Democrats particularly hard-hit. The result could potentially accelerate Chancellor Angela Merkel's departure. (26.05.2019)

Some 70 influential creators spoke out against Germany's ruling parties for climate inaction. The CDU has had to walk back its criticism of a YouTube star who slammed them for not tackling climate change. (24.05.2019)

Gambia: India-made drugs may be linked to death of dozens of children 4h ago