Germany's AKK accused of calling for 'censorship' during election campaign

The head of Germany's conservative CDU party wants to hold a debate on whether opinions expressed online ahead of elections should face regulation. The idea has sparked an outcry, with critics warning of censorship. 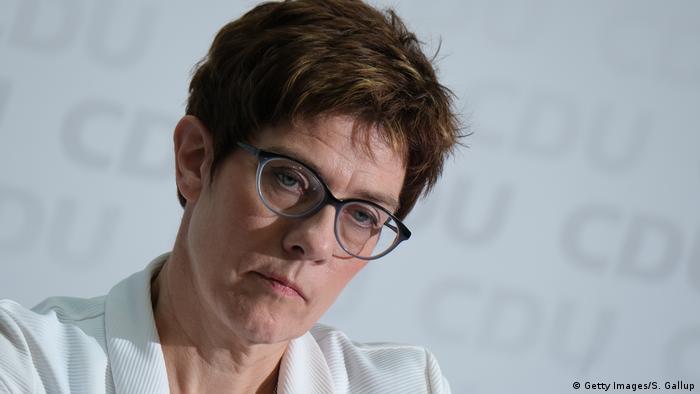 Annegret Kramp-Karrenbauer, who is often referred to by the initials AKK, the leader of Germany's ruling Christian Democratic Union (CDU), is facing heavy criticism after proposing a debate on the regulation of political views on the internet during election campaigns.

The plan was broached on Monday following the party's battering in the weekend's European Parliament elections. The CDU and its CSU ally won 28% of the vote — a drop of seven percentage points from 2014.

Just days before the election, German YouTube star Rezo released a video in which he urged voters to punish the CDU and its coalition partner the Social Democrats (SPD) over climate inaction. The clip went viral and led to 70 other influential YouTubers reiterating his message in another video aimed at young voters.

"What would actually happen in this country if, say, 70 newspapers decided just two days before the election to make the joint appeal: 'Please don't vote for the CDU and SPD'?" Kramp-Karrenbauer, Chancellor Angela Merkel's successor as CDU leader, said in Berlin. "That would have been a clear case of political bias before the election."

Kramp-Karrenbauer said there were important questions to be addressed, including "what are the rules that apply to opinions in the analog sphere? And which rules should apply in the digital sphere?"

These are questions "we will discuss — not just in the CDU ... rather, I'm certain, they'll play a role in discussions surrounding media policy and democracy in the future."

Kramp-Karrenbauer's comments have provoked a backlash from opposition politicians.

"I don't think that AKK should blame others for the CDU [election] result," said Green Party MP Katrin Göring-Eckardt. "Those who don't take the climate crisis seriously will lose out."

"AKK is considering the regulation of expression of opinions before elections," Christian Lindner, the head of the pro-business Free Democrats, wrote on Twitter.

"I can hardly believe it. On the contrary, we need more open debate, especially on social media," he said.

"The statement from CDU chair AKK today about comments from influencers is an unprecedented attack on freedom of opinion," Left Party MP Niema Movassat tweeted. "This is unacceptable, and she should resign immediately."

Georg Pazderski of the far-right Alternative for Germany (AfD) party accused the CDU leader of floating the idea of "censorship of the internet," out of fear that the CDU will suffer further defeats in upcoming state elections in eastern Germany.

Kramp-Karrenbauer responded to the criticism later Monday, saying it was "absurd to accuse me of wanting to regulate expression of opinion."

"Freedom of opinion is a valuable asset in a democracy. But what we need to talk about are the rules that apply during an election campaign," she said.