The opposition Greens have hit a record high in a new opinion poll, pulling ahead of Angela Merkel's conservatives. The center-left SPD have dropped even further, slipping behind the far-right Alternative for Germany.

In last month's European Parliament elections, the Greens came second among German voters with 20.5%, behind Merkel's bloc, with a mandate focused on issues such as climate change and a renewables-based economy.

In another boon for the Greens, the party's dual leadership of Robert Habeck and Annalena Baerbock polled at 36% and 26% respectively, placing them fourth and sixth as preferred national politicians in Thursday's findings published by Germany's ARD public broadcaster. 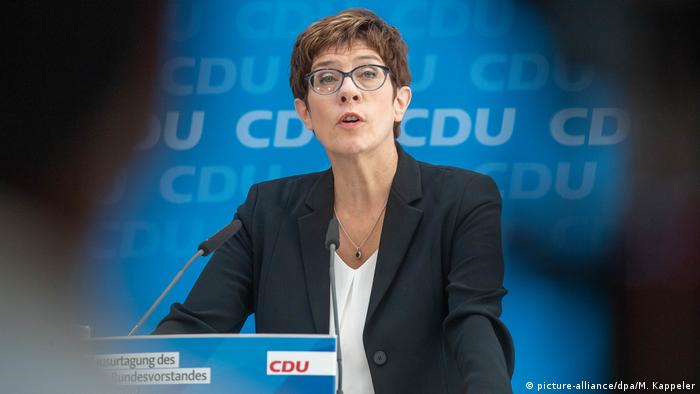 Only 27% thought Kramp-Karrenbauer would make a good chancellor

Merkel maintained her top placing at 53%, only 2% down from her Deutschlandtrend rating in May.

Annegret Kramp-Karrenbauer, who in December took over from Merkel as conservative CDU party leader, slumped 12 percentage points to 24% in the poll, which asked 1,500 Germans how they would vote if an election were to be held on Sunday.

The poor result for Kramp-Karrenbauer, also known as AKK, was her lowest rating yet in a Deutschlandtrend survey. Only 27% thought she would make a good chancellor.

Far-right AfD ahead of Social Democrats

For party preferences, respondents put the far-right Alternative for Germany (AfD) at 13%, just ahead of the center-left Social Democrats (SPD), which is searching for a new leader after this week's resignation of Andrea Nahles, on 12%. For the Social Democrats and Merkel's conservatives, the Deutschlandtrend results are their worst ever.

The business-friendly Free Democrats (FDP) remained at 8% Thursday, while the socialist Left party slipped to 7%, down 2% on last month.

In a separate sampling on Thursday, the Forschungsgruppe Wahlen polling agency put Merkel's conservatives at 27%, with the Greens close behind at 26%.

In another Infratest sampling of 1,000 voters, 72% responded that they were somewhat or completely dissatisfied with the work of Merkel's coalition government of her conservatives and the SPD, a 10% rise in dissatisfaction since last month. Those who were satisfied or very satisfied with the coalition's work made up only 28%.

In a separate YouGov survey, a majority of 52% wanted a fresh federal election. Only 27% called for a continuation of Merkel's coalition government.

The most preferred future coalition for 25% of respondents was an alliance of the Greens, the SPD and Left party.

A so-called "Jamaica" alliance between Merkel's conservatives, the Greens and FDP came next at 15%, with a conservative-Greens scenario relegated to 14%.

Among Green party voters, 54% hoped their party would enter into an alliance with the SPD and Left party. Only 25% wanted a Greens-conservative model, along the lines of the governments in the regional states of Hesse and in Baden-Württemberg.

Next real test in eastern states

Merkel's ruling coalition — forged after months of wrangling in the wake of Germany's 2017 general election — is nominally due to stay in office until 2021.

The next election test for the conservatives comes in September and October, when regional assembly elections take place in Saxony, Brandenburg and Thuringia, three eastern German states where the far-right AfD is polling strongly.