Three SPD politicians, including two state premiers, are set to provisionally lead the party after Andrea Nahles announced her resignation. When the party will elect a new leader will be determined later this month. 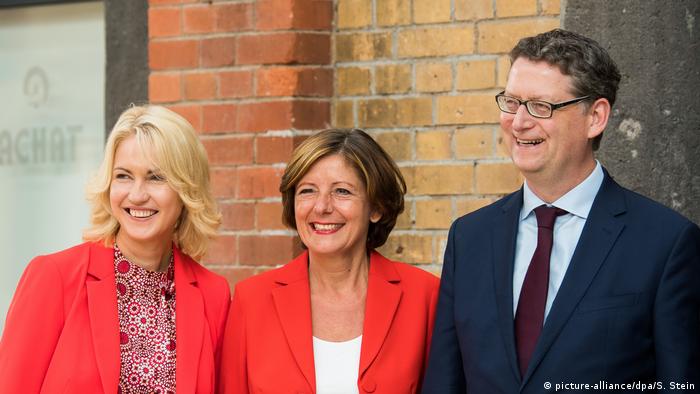 Manuela Schwesig, Malu Dreyer and Thorsten Schäfer-Gümbel, the three vice presidents of Germany's center-left Social Democrats (SPD), are set to lead the party on an interim basis until a successor to Andrea Nahles as party leader is elected.

Schwesig and Dreyer are the state premiers in Mecklenburg-Western Pomerania and Rhineland-Palatinate respectively, while Schäfer-Gümbel is the leader of the opposition SPD faction in the Hesse state parliament.

The SPD is not due to elect a new party leader until December's party conference. A decision on moving up the date for the vote is expected to occur when the party's executive board meets in three weeks time.

Not candidates for party leadership

At a press conference in Berlin on Monday, all three SPD politicians ruled themselves out of the running for party leadership. The three maintained that they are focus instead on leading a party transition until a new head is elected.

"We have all ruled out being candidates for party leader," Schwesig said.

Schwesig added that her place is as the premier of Mecklenburg-Western Pomerania. Similarly, Dreyer said it had long been her intention to run for re-election as the state premier for Rhineland-Palatinate.

Meanwhile, Schäfer-Gümbel intends to leave politics in the fall to take a position at Germany's Agency for International Cooperation (GIZ).

Nahles announced her resignation as SPD leader on Sunday, saying she wanted to give the party a chance to elect a new leader in an orderly way after a disastrous showing in the European elections. Her successor could prove crucial to German Chancellor Angela Merkel, whose center-right Christian Democrats (CDU) are in a coalition with the SPD.

The Social Democrats came in third in the recent EU elections behind CDU and the environmentalist Green party. The SPD fared even worse in a recent Forsa poll, which showed an all-time national low in support at 12%.

Could Germany see a new left-wing coalition in government?

Outgoing Left party icon Sahra Wagenknecht was long seen as standing in the way of a coalition with the SPD. However, there are fundamental reasons why a broad left-wing alliance in Germany may be difficult to achieve. (12.03.2019)