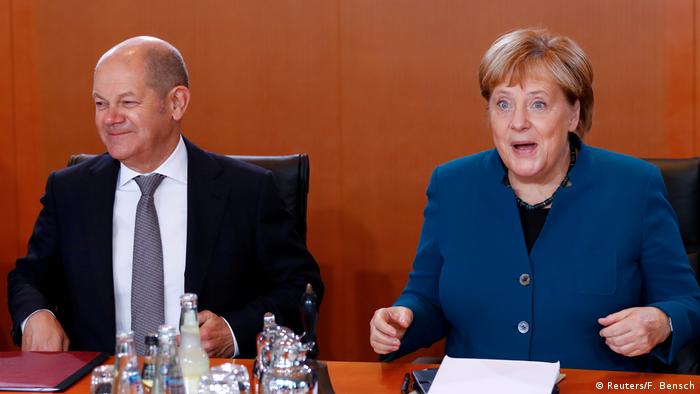 A majority of Germans believe that Chancellor Angela Merkel's coalition government should continue, according to a new survey published on Thursday. The result comes a day ahead of discussions by junior coalition partner, the center-left Social Democrats, on the future of the coalition.

The long-awaited SPD party leadership election last week put a left-leaning, coalition-skeptic duo at the helm of the party.

But designated leaders Norbert Walter-Borjans and Saskia Esken were quick to clarify that they will not be making any decisions on their party's future in the coalition too hastily.

The percentage of those in favor of the grand coalition

According to the latest monthly Deutschlandtrend report published by German public broadcaster ARD and conducted by political research firm Infratest Dimap, the majority of those surveyed did not believe that the SPD's new leaders could improve the party's results at the polls. Only 22% of those asked believe that Walter-Borjans and Esken will manage to attract more voters to the party.

The SPD, Germany's oldest party, has produced many chancellors and presidents, but it is now trailing at fourth place in the latest poll of party support.

Support for each political party

Merkel also saw her personal rating take a slight drop, with fewer voters satisfied with her than with her SPD Vice Chancellor and Finance Minister Olaf Scholz.

Scholz was the favorite to win his party's leadership contest with his pro-coalition stance, but he and running mate Klara Geywitz were pipped to the post by Walter-Borjans and Esken.

Kramp-Karrenbauer is widely touted as a possible successor to Merkel when the chancellor steps down following the next general election, scheduled for 2021. In her role as defense minister, she has been an ardent support of increased militarization of Germany and in increasing Germany's defense spending to bring it in line with NATO guidelines.

People's opinion on whether defense spending should be raised

NATO currently advises countries to spend 2% of GDP on defense, a figure not all NATO countries have met. NATO estimates that Germany spent around 1.36% of its GDP on defense in 2019.

The survey shows that an increased but narrow majority of Germans support an increase in defense spending to 2%. It is unclear if and when this increase could take place.