What′s next for Chancellor Merkel′s government? | Germany | News and in-depth reporting from Berlin and beyond | DW | 02.12.2019

What's next for Chancellor Merkel's government?

Should they stay or should they go? DW games out the likeliest scenarios for Chancellor Merkel’s fragile coalition government following the bombshell leadership decision of her Social Democrat partners. 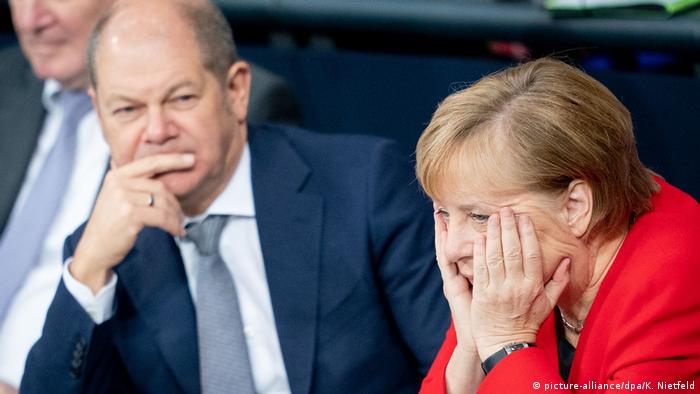 With two left-wing, anti-establishment Social Democrats poised to lead Germany's oldest party, Chancellor Angela Merkel's coalition government is more fragile than ever. Here are three scenarios to follow as the SPD considers both its future and that of Germany.

If there was one question that divided candidates the most during the SPD's leadership race, it was whether to file for divorce from Chancellor Merkel. The SPD begrudgingly entered its third government with Merkel last year — an unpopular decision that continues to haunt the party in regional elections and straw polls.

The duos who made it to the last round of the leadership contest embodied the SPD's multiple personalities disorder. Outsiders Esken and Walter-Borjans went all-in on critiquing the government, while sitting Minister of Finance Olaf Scholz and running mate Klara Geywitz advocated for continuing the so-called grand coalition with Merkel's conservative CDU-CSU bloc.

But Esken and Walter-Borjan's win doesn't mean that the SPD is already packing its bags. To the contrary, the party is more undecided about its future in Berlin than ever. Abysmal turnout in the leadership contest meant that only 28% of members voted for Esken and Walter-Borjans' tough talk about the coalition.

In myriad television appearances since their win was announced on Saturday, the duo has been cautious not to overstretch this thin mandate. They continue to critique the coalition but retreat from clear questions about an untimely departure. Instead, they insist that the party will discuss the matter when it meets for its annual party congress in Berlin this weekend, where the duo will also stand for an official vote of confidence.

As such, it's not out of the question that the SPD will once again choose stability and power over renewal despite its fresh-faced leadership. After all, 83% of SPD supporters want the party to stay in government until the next planned election in 2021, according to a November poll by German broadcaster ZDF.

The SPD began the grueling search for its next political superstars with the goal of rediscovering its identity after a decade and a half in government. So even if the party remains timid about leaving its coalition with Merkel, the most likely scenario is that it will try to renegotiate some key points of its marriage contract in order to signal a new era for the party, observers told DW.

"Despite the vote, the party will most likely back Merkel's government while at the same time continuing to struggle internally about where to search for the lost Social Democratic compass," Olaf Böhnke, Berlin director of Rasmussen Global, told DW.

There are some signs that Chancellor Merkel may make concessions in order to keep the SPD happy. Last month, for example, she whipped her party into accepting a basic pension scheme with lax need-based assessments, a hallmark of the SPD. 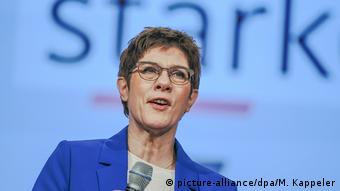 Kramp-Karrenbauer opposes renegotiation with the SPD

But CDU leader and Minister of Defense Annegret Kramp-Karrenbauer assured high-ranking party members on Monday morning that the party would under no circumstances renegotiate its coalition agreement with the SPD, according to German newspaper Die Welt.

Esken and Walter-Borjans, however, staked the SPD's participation in government on striking at a core pillar of the CDU's platform: a commitment to creating no new national debt. Without dipping into the red, they say, the state can't invest in digital and green infrastructure.

Both insist that all ultimatums will be discussed at this week's party congress in Berlin. But Walter-Borjans told German broadcaster ARD on Sunday that "if there's a blockade mentality from the coalition partners for these new tasks, then the decision must be made that it won't go any further."

The end of the line

If therapy sessions to reconcile differences bear no fruit, Chancellor Merkel's self-declared last term in office will likely come to an abrupt halt.

It would come at an extremely inopportune moment for Germany and Europe. Polarization has led to the rise of once-fringe parties on the right and left and the decline of establishment parties like the CDU and SPD across the continent.

In snap elections that would likely follow the split of the grand coalition, both parties would take historic losses. The CDU is polling at only 28% and the SPD at 15%, according to the most recent figures from pollster Forsa Institute.

Neither party has a clear candidate for the nation's highest post either, meaning the Greens could for the first time provide Germany's next chancellor: The party is polling between 20% and 23%, according to the latest polls.

But with this term's biggest policy challenges of passing a budget and getting climate change legislation on the books all but finished, some observers speculate that Chancellor Merkel could forgo electoral defeat in favor of a minority government.

That has happened on the local level in Germany, but never on the federal level for more than a caretaker phase. Depending on the issues, Merkel could make it work to salvage German stability, especially as Germany prepares to take over the European Council presidency next year, said Neugebauer.

But ultimately, the SPD and the CDU will have to weigh the positives and negatives of all scenarios before they take a step, he added.

"If we know anything, it's that Germans don't love instability," he said. "A German party that can't properly justify ending a coalition can forget making gains with voters."