The far-right Alternative for Germany party wants to attract "middle-class" voters by pursuing a more "moderate" path. The idea is likely to be met with opposition from the party's ultra far-right wing. 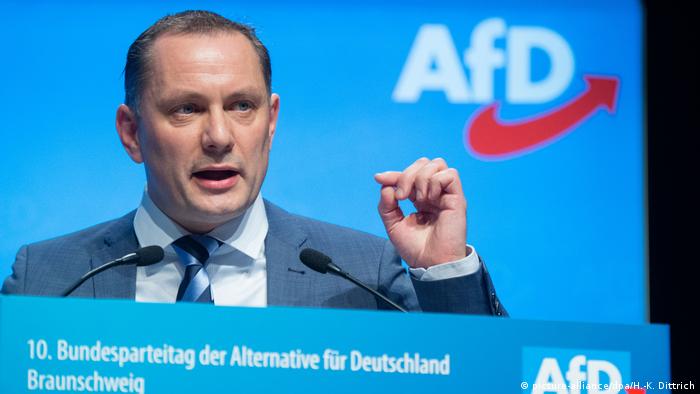 The new co-leader of the Alternative for Germany (AfD) party has called on party members to take a more moderate path as part of efforts to gain more mainstream voters.

"We can only reach the middle-class in a reasonable manner," Tino Chrupalla said in speech at the party's two-day national conference on Sunday.

Chrupalla was elected as the AfD's co-leader on Saturday. He replaced Alexander Gauland, a founding member of the party in 2013, who became the party's first honorary member on Sunday.

The AfD, which currently leads the opposition in the Bundestag, was set to become a "really serious political power" within the next few years, said Chrupalla.

"I see the biggest voter potential in the conservative, middle-class camp," he said, adding that "only with convincing content can we tap new classes of voters."

Chrupalla has previously pledged to take a moderate course and appeal to voters in the mainstream middle classes, including women.

Chrupalla will lead the party alongside Jörg Meuthen, who has also kept his distance from the radical right.

"It's all going our way," Meuthen said on Sunday. "That's why we need to be ready, we have to be good."

Andreas Kalbitz, who was again selected for the party's federal committee, told DW that the party's new maxim in working together is "fewer fractures, more bridges." He is seen as the central strategist of the ultra far-right wing in the AfD.

Among them is the AfD head in Thuringia, Björn Höcke, who uses language that has echoes of Hitler's Third Reich.

Two years ago, Höcke criticized Berlin's Holocaust memorial, saying Germans were "the only people in the world to plant a memorial of shame in the heart of their capital."

But on Sunday, Höcke appeared to try and avoid conflict with the party's new course.

"I have no time for Berlin," he told DW. As party leader in Thuringia, he said he had enough to do and that he could also influence the party from his state. But he stressed that this order of priorities was not set in stone.

Gauland himself once compared the Nazi era to a speck of "bird shit" when held up to Germany's greater history. He also suggested that people could "dispose of" a government official with a Turkish background "in Anatolia."

Despite the comments from his fellow party members, Chrupalla said on Saturday that he wanted to prepare the party for government.

Germany's mainstream political parties have so far refused to consider forming a coalition with the AfD at the federal level, as well as in state governments.