The co-chairman of Germany's far-right AfD could face legal action for appearing to trivialize the Nazi era. A complaint has been filed with a public prosecutor, accusing Alexander Gauland of inciting hatred. 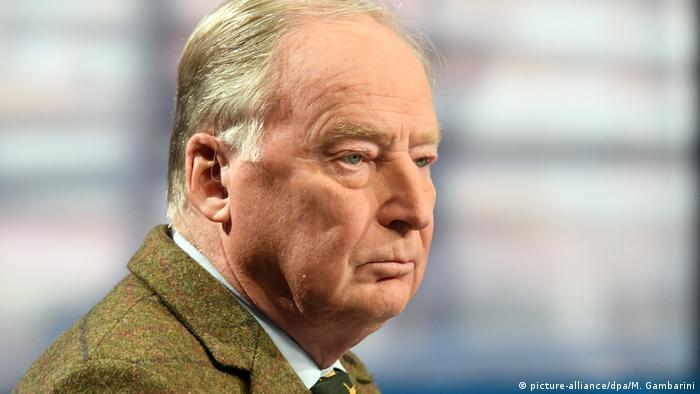 Alexander Gauland, the co-chairman of the far-right Alternative for Germany (AfD) party, provoked outrage last weekend by claiming the Nazi-era merely amounted to "bird shit" within the context of Germany's otherwise "long and successful history."

Gauland could now find himself in legal trouble over those remarks, after the chairman of the Council for Foreigners in Hesse on Wednesday filed a complaint with the public prosecutor's office in the city of Wiesbaden. The AfD chief stands accused of inciting hatred.

Council chairman Enis Gülegen described Gauland's remarks as "scandalous" and an "intolerable mockery of the victims of the Holocaust."

Gülegen went on to accuse Gauland of seeking to "deliberately downplay" the crimes committed during the Nazi era.

However, the AfD co-chair is far from the only party member to be accused of trivializing the Holocaust. Last year, Björn Höcke, the AfD's hardline leader in the German state of Thuringia, called for a "180-degree reversal" to Germany's politics of Holocaust remembrance and described the Holocaust Memorial in Berlin a "monument of shame."

Last month, an AfD arbitration court ruled that Höcke be allowed to remain within the party, despite the comments.

The "conscious and constant provocation by leading AfD representatives" must be stopped, Gülegen said. "If there is no other way, then it must be done through legal action."

Gauland faced widespread indignation over his remarks, including from within his own party.

"Hitler, Germany's worst mass murderer, is by no means just bird shit," AfD lawmaker Uwe Witt tweeted immediately after Gauland's remarks: "I apologize to all of our fellow Jewish citizens, the victims of the Holocaust and their families for our chairman's unbelievable trivialization."

Outside of the party, President Frank-Walter Steinmeier accused Gauland and the AfD of "opening wounds and sowing hatred" for downplaying the crimes of the Nazis.

Annegret Kramp-Karrenbauer, the general secretary of Chancellor Merkel's Christian Democrats (CDU), was incredulous, tweeting that, to the AfD, "50 million war victims, the Holocaust and the total war" apparently amounted to nothing more than "bird shit."

Several media publication also jumped on Gauland's comments, with Germany's Tagesspiegel newspaper taking a harsh stance. On Monday, it printed AfD chairman's words on its front page over several photographs of the Nazi-era, including images of murdered Holocaust victims.

Alexander Gauland is one of two leaders of the far-right, nationalist AfD party - and he's known for his controversial, headline-grabbing statements. (04.06.2018)