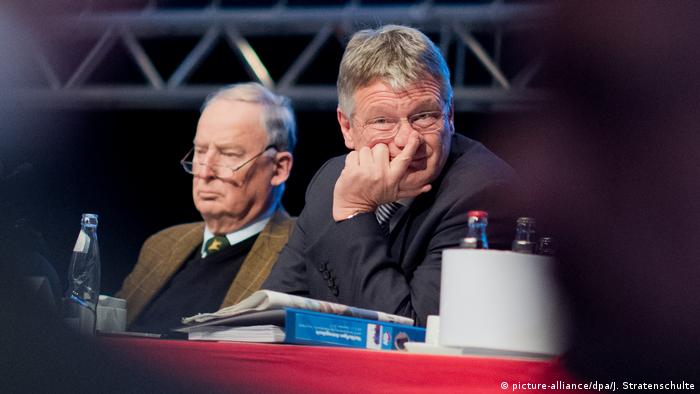 "We are a party of freedom, of justice and of direct democracy," Jörg Meuthen (right in photo) told DW on the sidelines of his party's convention in Hanover on Sunday, a day after he was re-elected co-chair of the far-right Alternative for Germany (AfD).

Meuthen was responding to criticism that the AfD, like other far-right parties across Europe, simply seeks to disrupt politics rather than to pursue specific policy changes.

"We don't want to leave the EU, for example," Meuthen said, deflecting a comparison to the Brexit campaign by the UK Independence Party, formerly led by Nigel Farage. "We want to change it."

The future is the past

AfD members are happy to couch their positions as attacks on the status quo — they call Chancellor Angela Merkel's Christian Democrats "lemmings" and refer to Berlin as a "swamp" — but, for all the tough talk of being "ready for the future," the convention in Hanover showed just how much the party is stuck in the past.

Perhaps the starkest example of nostalgia was when Beatrix von Storch, who represents the AfD in the European Parliament, declared that "we want to keep the Germany that we grew up in," garnering a standing ovation from the crowd.

And, despite much talk of a "new direction" for the party as it enters the Bundestag, the AfD elected Alexander Gauland (left in the top photo) to the party's leadership on Saturday as well re-electing as his longtime ally Meuthen as co-chair. Prior to Saturday's vote, Gauland had declared that he wasn't in the running for the post, but afterward he insisted that "fate wanted it another way."

There was also little attention paid to the wishes of Alice Weidel, Gauland's co-chair during the campaign and now the party's parliamentary leader, to increase the number of female party members and supporters. Only 13 percent of the AfD's voters in September's general election were women. Of the several dozen speakers who addressed the 600 delegates over the weekend, only two were women.

The Schleswig-Holstein state legislator Doris von Say-Wittgenstein was forced to give up her bid for what ended up as Gauland's spot in the leadership after her male competitor refused to bow out. And only a few scattered female supporters sat among the rows and rows of men.

Members of the youth wing, the Young Alternative (represented here only by men), took exception to the suggestion that the AfD is a party for the old and male.

"We are offering a future worth living in," one said, "holding on to our free way of life, our culture, our language." 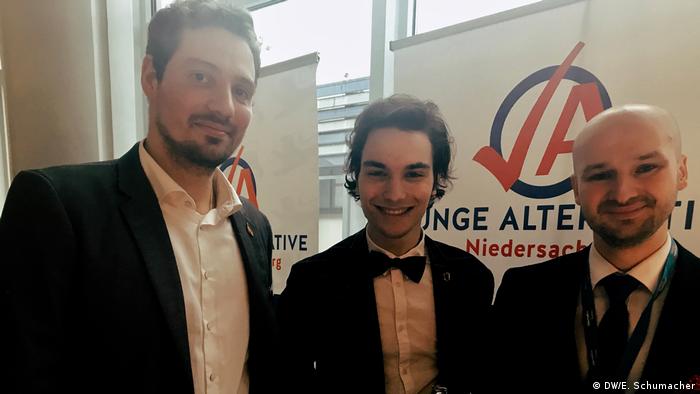 Young Alternative members say the party has a bold future, demographics aside

When pressed for concrete examples of how the AfD plans to achieve this "future," one responded that there was a "conservative rebellion against old-school leftist politics that have failed to offer anything concrete to young people."

It remains to be seen what Gauland, 76, and Meuthen, 56, have to offer Germany's youth should they achieve their goal of being "ready to govern" the country in four years' time, when the next Bundestag elections are scheduled.

What was perhaps most significant about the election of Gauland and Meuthen was the signal that the extreme-right wing of the AfD will set the party's course in the Bundestag. Both men have supported the ethno-nationalist goals of the party over members who seek to return to its financially conservative, euroskeptic roots.

Meuthen and Gauland have both protected and defended the AfD's most controversial figure, Björn Höcke, who has made outrageous statements about Berlin's Holocaust memorial and created numerous other small scandals.

"Björn Höcke belongs to our party," Meuthen told DW, adding: "That doesn't mean I agree with every position he has."

Indeed, as successive candidates for the lower rungs of leadership were called to speak, each in turn voiced unequivocal support for Höcke.

Though there was little put forth about policy at a convention that mostly functioned to decide who would play which roles in the party for now, the rhetoric at the convention on Sunday made it clear how absolute the victory of the AfD's far right was. Doubling down on the party platform statement that "Islam does not belong in Germany," one speaker even declared that "Islam is not a religion."

And then there was AfD deputy chief Kay Gottschalk's comment that the left-wing protesters who tried to rush him on Saturday "could have led a concentration camp" 75 years ago.

"It is the dusk of the Merkel era," Weidel, the parliamentary group co-leader, said to rapturous applause as the convention wrapped up where it began: with self-congratulations about September's election results. "We are taking our country back from the politicians who have given up on it."

Though it remains to be seen whether the nationalists will prove as "hostile to democracy" as mainstream parties claim, their party's convention in Hanover was a clear demonstration of the level of discourse Germany can expect from the 92 AfD lawmakers who now sit in the Bundestag.