The divisive politics of the Alternative for Germany were on full display, both inside the party's convention and on the streets outside of it. DW's Elizabeth Schumacher reports from Hanover.

"There are people in this country who say 'we can do it,' and those who actually get something done," Jörg Meuthen, the spokesman for the far-right Alternative for Germany (AfD), said on Saturday as he opened the AfD's first national convention as a party in the Bundestag.

The comment was a clear shot across the aisle at Chancellor Angela Merkel, who had famously said "we can do it" in response to questions about how Germany would take in hundreds of thousands of displaced people beginning in 2015. The AfD has made refugees the party's bread and butter since it morphed from its roots in euroskeptic fiscal conservatism to the anti-immigrant nationalism it is known for today.

Meuthen appeared positively gleeful that, over two months after Germany's federal elections, Merkel's Christian Democrats (CDU) have yet to form a government.

"More mature, more adult, smarter" is how Meuthen described the AfD, which would be the largest opposition party in the Bundestag if Merkel's CDU forms another grand coalition with the center-left Social Democrats. That would allow AfD members to speak first in Bundestag debates.

Indeed, there was much self-congratulation on Saturday at the AfD's convention in the northern city of Hanover. The first order of the day was a recap of election successes in 14 of Germany's 16 state parliaments (with a promise to take Hesse and Bavaria next year) and a round of applause for the AfD's 92 newly minted Bundestag lawmakers.

Despite all the talk of getting down to business, it took the nationalists nearly seven hours to get to Saturday's matter at hand: selecting leaders who will set the course for the AfD's stated goal of being "ready to govern" by Germany's next federal elections, in 2021.

Before it could get on to the leadership vote, the "more mature" AfD did what it has done since the party's infancy in 2013: divide into competing camps on nearly every issue.

First came party member Björn Höcke, by now infamous for his statements about Berlin's Holocaust memorial, to criticize the AfD's leadership, only to be shouted down by louder voices from the podium. Then the party voted by an extremely narrow margin — 51 percent to 49 — to maintain its double-pronged leadership, all but ensuring that its tradition of contentious infighting continues.

The AfD certainly likes to cloak its attacks on the status quo in the terms of emancipation —  "dare more democracy," the slogan goes — but the streets of the cities where the party has convened speak volumes about how divisive its politics are for Germany, which has not had a far-right party in parliament since the aftermath of World War II.

As at the AfD's convention in Cologne in spring, thousands of police officers came from all over the country to set up barricades around the nationalists to keep out the more than 6,000 demonstrators who sought to voice their opposition to pronouncements such as "Islam does not belong in Germany," such policy proposals as the immediate repatriation of Syrian refugees, and the AfD's general repudiation of multiculturalism.

"No one gets to dictate from on high what it means to be German," said Paula Rahaus, a spokeswoman for the youth wing of the Greens, one of the groups behind Saturday's protest.

"We want to stop them from spreading their antisocial politics," Rahaus said. 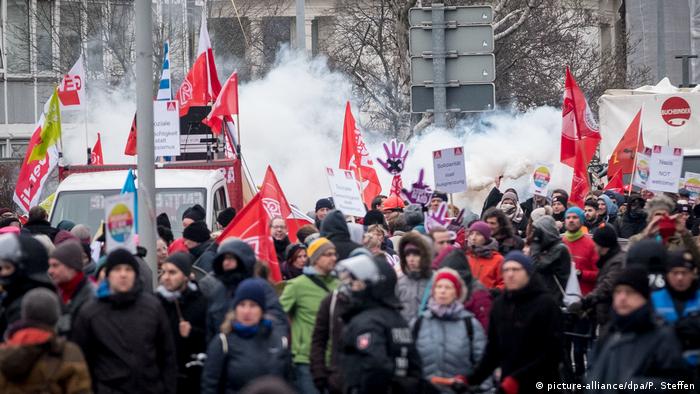 Police put great effort into suppressing the 6,500 people who protested against the AfD

Many protesters were up long before dawn and already demonstrating by 6 a.m. as they attempted to prevent the convention from even starting. Braving freezing temperatures, barbed-wire fences and police in riot gear, thousands took to the streets, chanting "Piss off Nazis — no one will miss you" and carrying signs in support of religious pluralism.

The protests took on many shapes and sizes, in some cases turning violent as sporadic clashes broke out between demonstrators and security services. Police employed water cannons in the frigid early morning against a number of left-wing protesters, and one young man had his leg broken in the fracas.

"They are not a normal party," one young protester said when asked whether he thought the AfD had the right to hold conventions as Germany's other parties do. "They are undermining our democracy."

Whether the AfD actively seeks to dismantle certain democratic structures a la Viktor Orban in Hungary or the Law and Justice party in Poland remains to be seen. As it is, there is little that the party could do to stand in the way of a majority government — whenever one eventually materializes.

But for all the AfD's rejection of the status quo, by the end of Saturday the party had chosen to stay the ethnonationalist course that has brought it so much success, electing Meuthen and then continuing to debate, much longer than planned, who would be his co-leader before eventually choosing to re-elect current co-chair Alexander Gauland to his post.