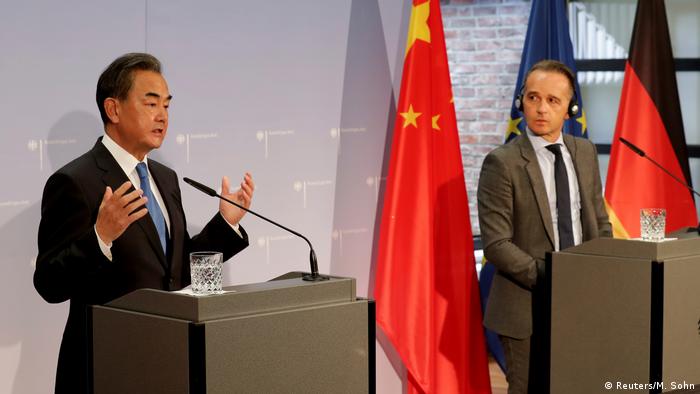 German Foreign Minister Heiko Maas called for the withdrawal of China's national security law in Hong Kong as he met with his Chinese counterpart at a villa on the outskirts of Berlin.

"We want the principle of 'one country, two systems' to be fully applied," Maas told Chinese Foreign Minister Wang Yi.

A sweeping national security law was passed by Beijing at the end of June in response to mass demonstrations in Hong Kong, which had been going on for over a year.

The law was widely decried by Western countries and Beijing critics. China says it aims to ban subversion, separatism, terrorism and collusion with foreign countries.

Maas also called for swift parliamentary elections to take place in Hong Kong. The elections, which were planned in September, were indefinitely postponed due to the coronavirus pandemic. However, democratic opposition groups see the postponement as illegitimate.

Europe demands that the election take place "quickly and unhindered," said Maas, adding that the EU should agree on a common set of sanctions in response to the election delay.

The German foreign minister also called for a UN observer mission to investigate the human rights situation of the Uighur minority in Xinjiang region in northwest China. "We would very much welcome it if China granted an independent UN observer mission access to the camps," said Maas, adding that he had noted a "willingness to do so" on China's part.

Responding to Maas' comments, Wang said that the issues were both "Chinese internal matters" that foreign governments should not interfere with.

"Whether Hong Kong or Xinjiang, both fall into the category of internal Chinese matters. We do not want any foreign interference in Chinese society," said Wang.

The situation in Xinjiang is also set to be a focus of the German-Chinese human rights dialogue which will be held next week. More than one million Uighurs and other Muslims are currently imprisoned in detention camps in Xinjiang, according to several human rights organizations.

Beijing has rejected the accusations, saying the camps are "educational centers" that serve the fight against radical Islam.

Despite the naming issues of contention, Maas also emphasized the common ground between the two countries, and expressed confidence that the Germany and China would soon reach an agreement on investment protection.

Both Maas and Wang also underlined their countries' commitment to finding multilateral solutions to global problems.

Earlier on Tuesday, Hong Kong pro-democracy activists gathered outside the German Foreign Ministry in Berlin, as Maas and Wang met at a villa on the outskirts of the capital.

Law called on Maas to raise the issues of liberty and human rights in Hong Kong, and told the crowd of about 100 to 150 demonstrators that it was "wishful thinking" from Germany and other western nations that China could be convinced to implement democratic reforms simply through dialogue.

"The authoritarian government is going the opposite way," he said, before adding that the European Union should increase pressure on China to respect "basic human rights."

Germany, which holds the EU's rotating presidency, should lead the way, he said, adding: "Appeasement strategies are rally, really useless."

Wang is currently on a week-long five-nation European tour, which also includes Italy, France, the Netherlands and Norway.

Ahead of Wang's visit, Green party leader Annalena Baerbock demanded that further negotiations on an investment agreement between the EU and China be linked to human rights guarantees. The agreement is intended to improve access for European firms to the Chinese market and guarantee investment protection.