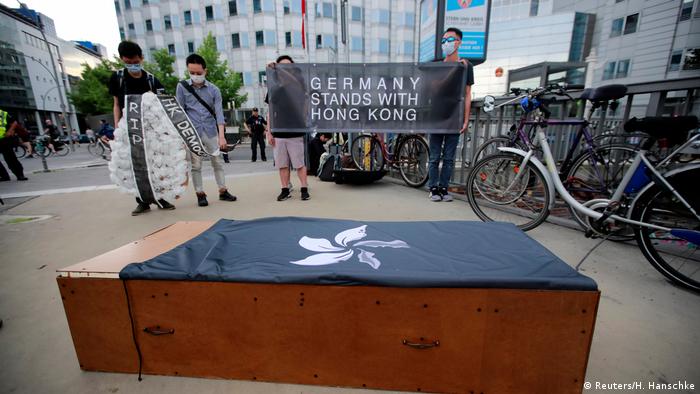 Hours after Germany ended its extradition agreement with Hong Kong on Friday in response to the territorial government's decision to postpone its elections, China issued a statement condemning the move.

China's embassy in Germany said the suspension of the treaty violated international law, and the basic norms of international relations, adding that it "reserve(s) the right to react further."

German Foreign Minister Heiko Maas on Friday said Berlin was ending its extradition treaty with Hong Kong. "We have repeatedly clarified our expectation that China will comply with its international legal obligations," he said. This includes the right to free and fair elections to which the people of Hong Kong are entitled, Maas added.

"The Hong Kong government's decision to disqualify a dozen opposition candidates for the election and to postpone the elections to the Legislative Council is a further blow to the rights of Hong Kong citizens," the foreign minister said.

The Chinese embassy expressed its "strong indignation and firm opposition" to the foreign minister's remarks.

Earlier in the day, Hong Kong Chief Executive Carrie Lam announced that she was delaying the legislative election planned for September 6 due to mounting concern about the coronavirus pandemic. She said that the election would be held on September 5, 2021.

The announcement comes a day after 12 opposition candidates were disqualified from contesting the election.

A group of 22 lawmakers in Hong Kong issued a statement accusing the city administration of using the outbreak as an excuse to delay the vote.

Beijing's latest crackdown comes a month after it rushed in a controversial new national security law that targets pro-democracy activists in Hong Kong.

Germany's decision to end the agreement follows several additional steps taken by both Germany and the European Union in response to the controversial security law imposed on Hong Kong by Beijing.

Germany has already imposed an export ban on certain items used for surveillance or by the military or police  for example, items that could be used against civilians during demonstrations.

The country has also loosened its visa requirements for some Hong Kong residents and has taken steps to extend scholarships to more scientists and students from Hong Kong.

Countries including New Zealand, Australia, Canada, and the United Kingdom have also suspended their extradition agreements with Hong Kong in recent weeks.