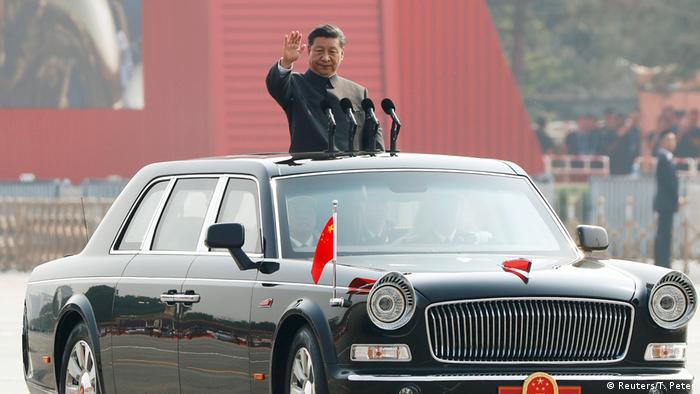 At the 19th convention of the Communist Party in October 2017, Chinese President Xi Jinping said that a "new era" had dawned for China and that the People's Republic was "getting closer to the center of the world every day." But how does China imagine a world order in which it is at the center-stage?

"My understanding is that the political forces in Beijing do not know exactly what they want. They're experimenting with Deng Xiaoping," Gu Xuewu, a Bonn-based political scientist, told DW, referring to the Chinese politician who initiated economic reforms in the 1980s. Deng's famous motto was "crossing the river by feeling the stones."

China's indecision is also reflected in complex debates about its role in the world, according to Volker Stanzel, a China expert and former German ambassador to Beijing. The debates deal as much with Beijing's acceptance of the prevailing global order as with the idea that China – chosen by fate – must lead the world.

As varied and complex these discussions appear to be, the Communist Party of China (CPC) has the final say in all matters, which are not necessarily about world order, according to Stanzel. "It is only a question about China being able to function in a way that the ideas of the CPC can be implemented, and which can help it stay in power."

Despite these ambiguities, Gu says that some key elements of the "Chinese order" can still be identified. "China wants a world order that is politically multipolar, functionally multilateral and ideologically pluralistic."

Multipolar: A world dominated by several power centers – China, the US, Europe, Russia and maybe India.

Multilateral: A world in which no country alone determines the global agenda; it must be negotiated between all power centers.

Pluralistic: The world must accept different forms of governance and not just liberal democracy.

"We already live in a multipolar world," Gu said. Many political scientists agree that the short phase of American hegemony following the collapse of the Soviet Union no longer exists.

In China, multilateralism has been linked to Xi's catchphrase, "the community of common destiny." In 2019, Xi rejected isolationism and positioned China as a supporter of multilateralism in a speech at the World Economic Forum in Davos.

But Stanzel is skeptical.

"Common destiny is empty talk; it needs to be defined. How do you want to organize the world? With more international laws and stronger global institutions? But I don't think that either China or the US are interested in this," Stanzel said.

Both China and the US, however, give little value to international laws, said Gu. "They accept them only if they suit their own interests. They reject them if they conflict with their interests."

US Consulate in Chengdu closes

US Consulate in Chengdu closes amid rising tensions

Image-building campaigns and the Silk Road

Beijing wants to improve its global image, with Confucius institutes promoting Chinese language and culture across the world. At the same time, Chinese investors are buying media companies in an attempt to alter China's global perception.

China is also actively participating in the United Nations. "China chairs four international institutions – twice as many as the US – and uses its position to include its political expression in UN documents," Stanzel said.

However, the success of Chinese measures is uneven in different parts of the world. "The narrative is successful in Africa, more so in states that are economically tied to China," Stanzel added.

In Germany and other industrialized countries, China's image has been dented due to its somewhat aggressive diplomacy. The detention and reeducation of hundreds of thousands of Uighurs in Xinjiang and the massive curbs on the freedom of Hong Kong citizens have further damaged China's reputation in Europe and the US.

The new Silk Road (Belt and Road Initiative, BRI), which was initially hailed as the world's largest infrastructure project, has also turned out to be a double-edged sword for many countries. Some critics say the project is making economically weak countries dependent on China. Sri Lanka, for instance, had to lease a deep seaport in Hambantota to a Chinese company for 99 years after failing to pay back loans.

Gu believes that Chinese ambitions are significantly overestimated. "Anyone who wants to lead the world must be able to make general goods available free of charge and have a certain altruistic zeal to implement certain ideas globally," he said, adding that China lacks that. "China actually does not want to replace the US. It is even wary of taking on these tasks."

But even if China does not strive for global hegemony, its supreme status in Asia is beyond any doubt.

President Xi talked about "Asia for the Asians" in a 2014 speech. But what does the "Asia for the Asians" mean in the context of the Chinese order? A 2010 statement to the Association of the Southeast Nations (ASEAN) by then Chinese Foreign Minister Yang Jiechi can help us understand the dynamics: "China is a big country and other countries are small. It is simply a fact."

Nowhere in Asia is China's hegemonic claim more obvious than in the South China Sea. China is not only trying to force the US out of the region, it is also bringing key shipping routes and raw materials of the neighboring countries under its control. The consequences for "peripheral states" are instability and the growing pressure to choose between China and the US. There is also an increasing danger of an all-out military confrontation.

The crucial question is whether the rise of China and the new alignments in the world order would lead to war. Experts believe the clashes in the South China Sea are just a precursor.

"The result will be an intense security competition with considerable potential for war. In short, China's rise is unlikely to be tranquil," John J. Mearsheimer, an American political scientist, wrote in The National Interest journal in 2014.

Ming Xia of the City University of New York told DW: "I don't believe that China and the West can coexist if China maintains its own system."

Will a dialogue help China and the West overcome their differences? Analyst Gu says he is "very pessimistic" about it.

"I don't think the US is prepared to concede to the Chinese authoritarian government," he said.

Stanzel is also skeptical, albeit for other reasons. "The CCP does not want to go to war, but China's aggressive behavior is leading to the danger of a military conflict, as we have witnessed in the South China Sea."