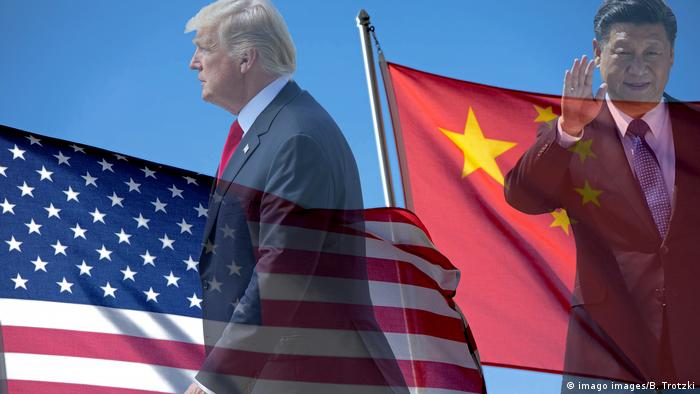 Tensions have been high between the US and China for years, but US Secretary of State Mike Pompeo's recent comments on territorial disputes in the South China Sea have taken the acrimony to a whole new level.

Four years after the Permanent Court of Arbitration in The Hague declared China's claims in the region to be legally baseless, the US has now labeled them illegal, too. "The world will not allow Beijing to treat the South China Sea as its maritime empire," said Pompeo.

Observers say this is the first time the US has taken sides against China rather than attempting to mediate a compromise. And the US is not just making empty threats. Its warships regularly patrol the contentious maritime area, though their presence is condoned by international law thanks to the decision of the Permanent Court of Arbitration.

China and the US have both armed themselves - not just in terms of material, but also in terms of a willingness to risk collision. Declarations of war can be easily read between the lines.

The real theater is the Middle East

Beijing has not backed down, however, choosing instead to up the ante by leveling sanctions against US politicians, among them the outspoken China critics Ted Cruz and Marco Rubio of the Republican Party.

Sanctions have also been put on arms manufacturer Lockheed Martin, which recently announced weapons sales to Taiwan, viewed by China as a breakaway province. Still, despite the drama, this particular spat is all about symbolism.

The most dramatic step China has taken so far came in the form of its recently announced economic and security cooperation with the Islamic Republic of Iran.

According to media reports, Beijing and Tehran have signed a comprehensive long-term partnership agreement. Over the next 25 years, the Chinese communist government says it will invest billions of dollars in Iran.

In return, China will receive Iranian oil. Iran is one of the world's largest oil exporters, and income from China could help the country out of the international isolation it finds itself in because of US and United Nations opposition to its controversial nuclear program.

In view of the continuing threat scenario the US has maintained vis-a-vis Iran, by seeking a partnership with Tehran China has clearly chosen to confront Washington, even risking a head-on collision.

Beijing's message is crystal clear, and it is threatening. Leaders in China thought through exactly how the US would react to the move, and they show no fear of retribution.

That also means economically. After China announced its highly contentious National Security Law for Hong Kong on July 1, US President Donald Trump signed a sanctions bill that could eventually bar all Chinese banks from US dollar clearing accounts because such banks offer financial services to sanctioned individuals and firms.

As the world's largest consumer market, the US has the upper hand when it comes to global trade.

Still, Beijing isn't worried. There are more than $3 trillion (€2.6 trillion) in US reserves bunkered in the basement of the Bank of China. And, according to US Federal Reserve data from July 2020, the Chinese government is the US's single biggest creditor, holding roughly $1.2 trillion (€1 trillion) in US debt.

If the US were to cut China and Hong Kong out of dollar trading, it would be detrimental to the US and could further strengthen the renminbi, or yuan, on the international market.

Battle of the superpowers

Former Chinese Deputy Foreign Minister Fu Ying addressed difficult relations between China and the US at a recent symposium. Fu said China would be "proactive" in playing its cards. That means China is not only ready to challenge the US' role as global superpower, but even more, it is seeking to break the US monopoly on power globally and create a new world order according to its own vision.

Conducting international transactions with the renminbi would be the first step in that direction. Another would be Beijing's long-term cooperation with Iran, a pawn - albeit one with nuclear ambitions - in a proxy war.

A new, so far non-violent conflict, looms on the horizon. But one thing is already clear: Neither party is shying away from confrontation, and both are itching for a fight - they are just waiting for the right time to start it.

US: Biden signs off on semiconductor bill in challenge to China 3h ago