What shifts led to the SPD win? Who turned up to vote where, and why? The demographic breakdown of the election in graphs. 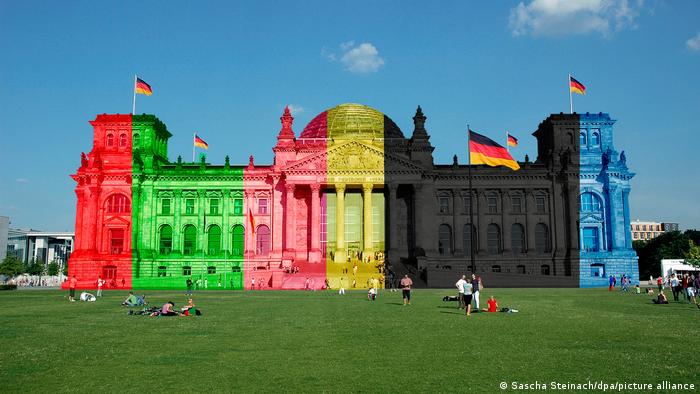 Six parties will be represented in the Bundestag

When it comes to elections Germany is still in some respects a divided country. In general, Chancellor Angela Merkel's conservative Christian Democrats (CDU) dominated the south and west, while the center-left Social Democrats (SPD) came out strongest in the rest of the country, except for some areas of the former East Germany which are marked by strong support for the far-right Alternative for Germany (AfD).

Almost all of Bavaria is still dominated by the CDU's Bavarian sister party, the CSU, despite its worst election performance since 1949. The exception is Bavaria's largest city, Munich, where the environmentalist Greens are now the largest party.

The southwestern state of Baden-Württemberg is a bastion of the CDU, despite the Greens leading that state's government. The Greens, however, won the university cities of Freiburg, Tübingen and Heidelberg with their many young voters. There were also a few pockets of SPD support.

In contrast, the eastern German states of Mecklenburg-Western Pomerania and Brandenburg are completely red, indicating that the SPD performed the best in all constituencies. The northern states Schleswig-Holstein and Saxony-Anhalt likewise went strongly red, and to a lesser extent, parts of Lower Saxony. A crucial turning point was the outgoing chancellor's own constituency in Mecklenburg-Western Pomerania, which went red after the SPD candidate defeated the CDU candidate meant to replace Merkel. 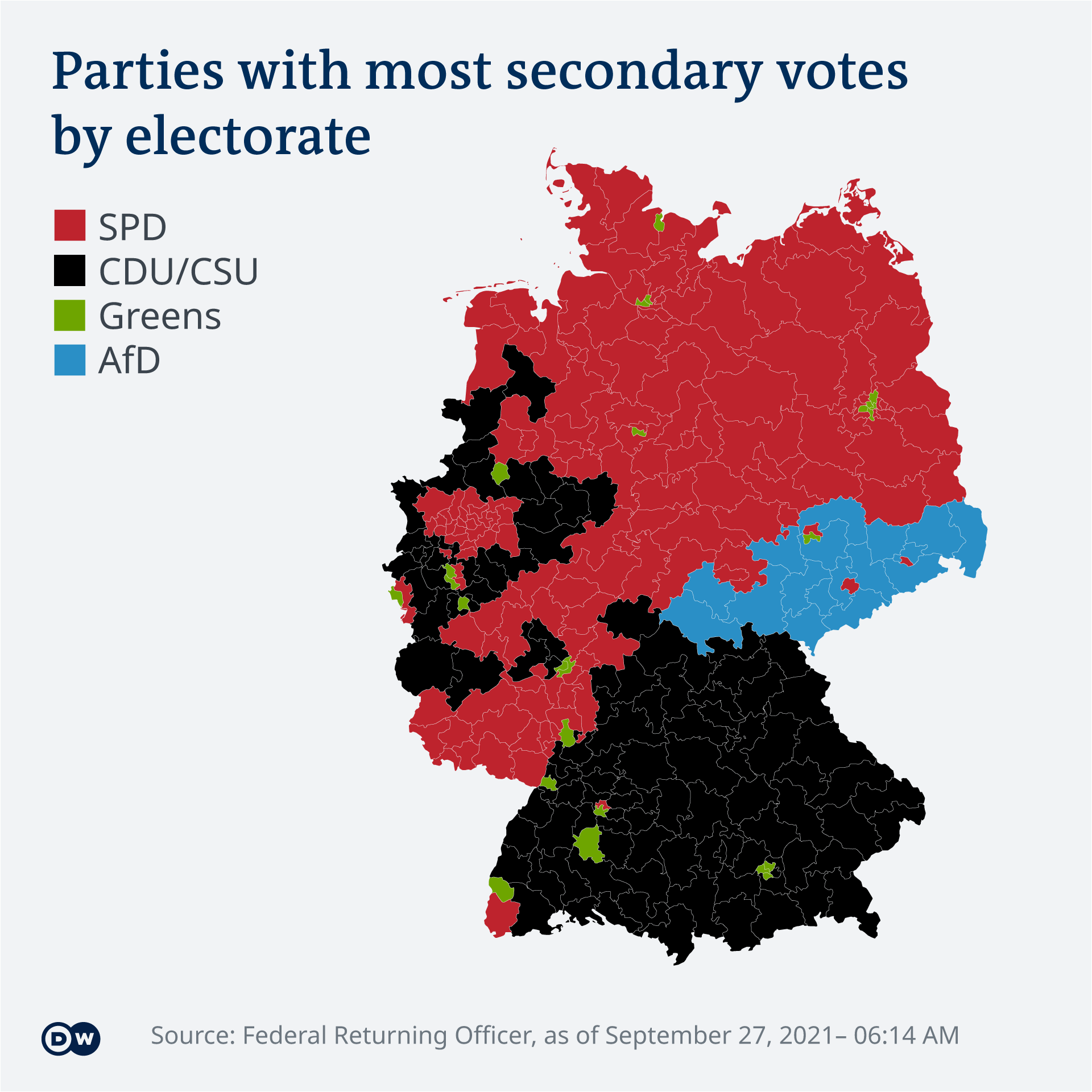 Germany's federal election system features both direct mandates and a second vote on proportional representation — in some parts of the former East Germany, the far-right AfD had a first-place showing in the latter vote

Far-right stronghold in the east

There is now a clear far-right populist belt running through southeastern Germany. The AfD dominates almost all of Saxony as well as the southern part of Thuringia and the southern tip of Saxony-Anhalt. All three states were previously part of the communist German Democratic Republic, more widely referred to as East Germany. In Saxony, the AfD has become by far the strongest party, with almost one in four voters voting for them.

There, the formerly dominant CDU slipped behind the SPD and into third place. The AfD also came in first place in Thuringia. Responding to the loss, Brandenburg CDU state chairman Jan Redmann wrote on Twitter that "the CDU must not become a West German party after Angela Merkel."

The Greens have their strongholds scattered throughout Germany rather than concentrated in one state or region. All of those areas are major cities or university towns. 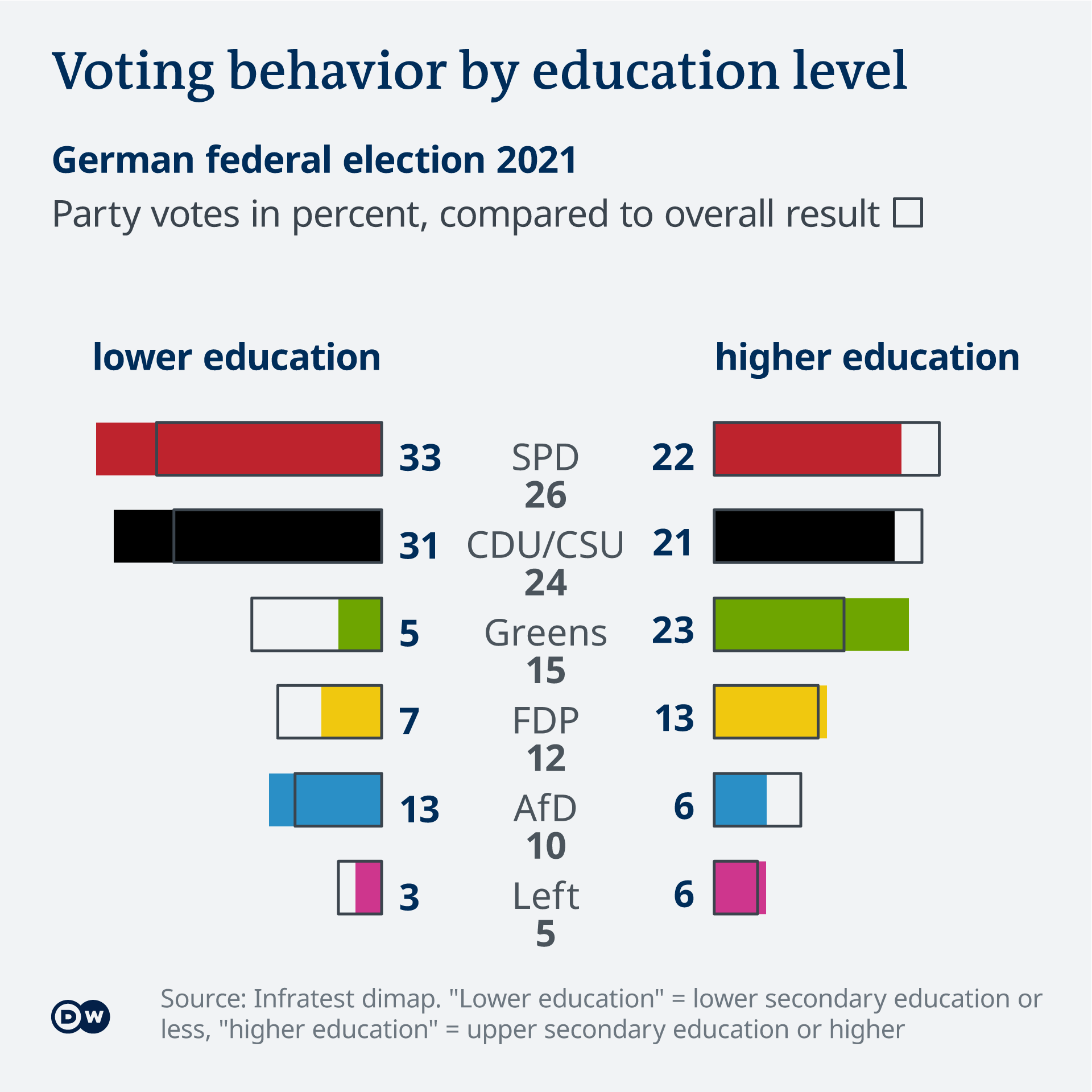 Who wins direct mandates where?

When it comes to direct mandates — the first vote that allows Germans to vote directly for a candidate in Germany's two-vote system — the results generally coincide with the second vote for party lists. A notable outlier was the Left Party, which won three direct mandate seats — two in Berlin and one in Leipzig — while earning less than just under 5% of the vote nationally, down over 4% from its 2017 national showing.

Generally, parties that fail to clear the 5% hurdle do not receive proportional representation seats in German Parliament. In this case, because the Left Party won three direct mandates, they will still receive party list seats.

In Germany, high-profile politicians often run both for direct mandates and their parties' lists. Green Party co-leader Robert Habeck won his Flensburg-Schleswig constituency, which was the first his party won in that state. The party's chancellor candidate and co-leader Annalena Baerbock faced off against SPD chancellor candidate Olaf Scholz in Potsdam, with Scholz winning the seat.

Wins and losses by state

There is not a single constituency in Germany where CDU/CSU made gains; their losses range from 1.2% to 17.1%. The lower number came from Aachen, the hometown of CDU/CSU chancellor candidate Armin Laschet; the largest came in Mecklenburg-Western Pomerania, Thuringia and Rhineland-Palatinate.

Aachen's two voting districts were the only constituencies where the SPD lost votes, while it gained votes in all other districts. The SPD's largest gains were in eastern German states, as well as in the tiny western state of Saarland.

The Left — the reformed successor party to the former East German ruling party — suffered its heaviest losses in the east, which had long been its stronghold.

The economically liberal Free Democrats (FDP) made gains in most states, stagnated in Bavaria and lost almost everywhere in North Rhine-Westphalia. With the Greens and the AfD, the picture is too mixed for any pattern to emerge. 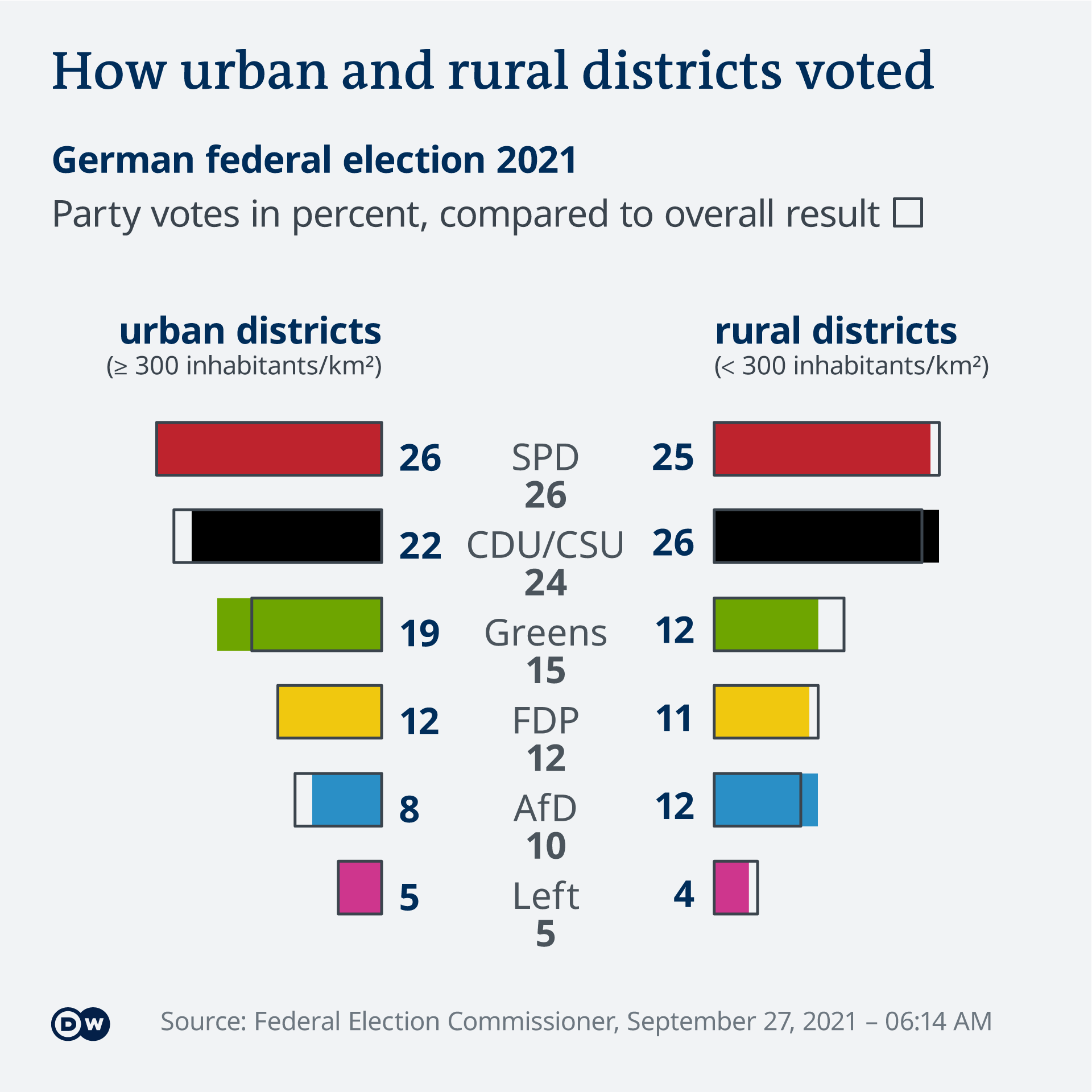 The Greens have the largest urban-rural divide in their vote, and still struggle to match their results in cities with support outside of them. The Left has a similar problem but on a smaller scale. The AfD receives a higher percentage of its vote in rural areas and fails to attract the same number of votes in cities. 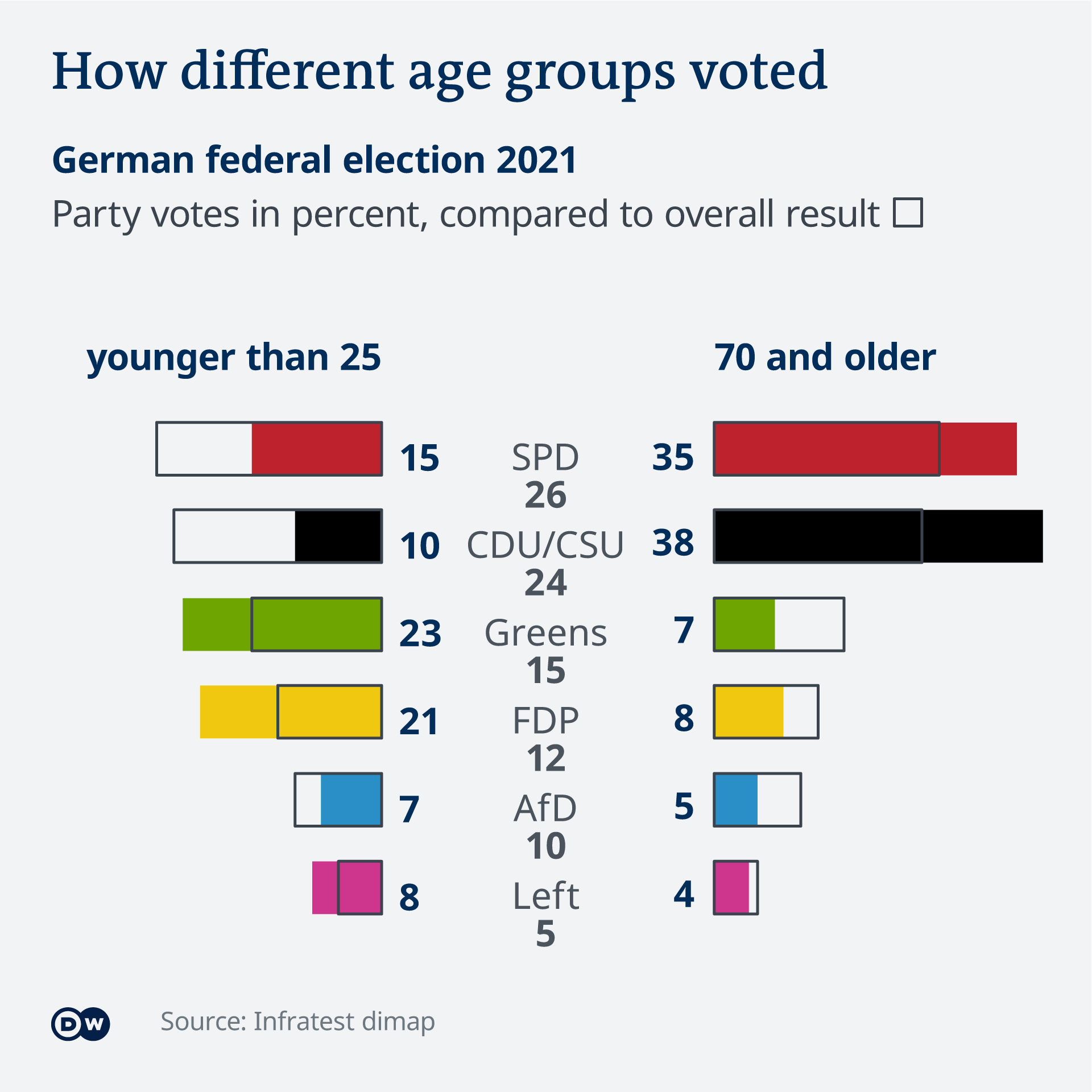 How older and younger groups voted

As Germany grays, that trend also shows itself in electoral results. The historic centrist big-tent parties — the CDU/CSU and SPD — are much more popular among older voters than with younger voters. The CDU/CSU won 38% of the over-70 vote, but just 10% of the under-25 vote. The SPD won 35% of the over-70 vote, and 15% of the under-25 vote. This appeal to older generations works to both parties' advantage, with older voters outnumbering younger voters and having a higher turnout rate.

The Greens, FDP and the Left have similar problems. They all perform much better with younger than with older voters. The AfD underperforms in both categories and is mainly supported by middle-aged voters. 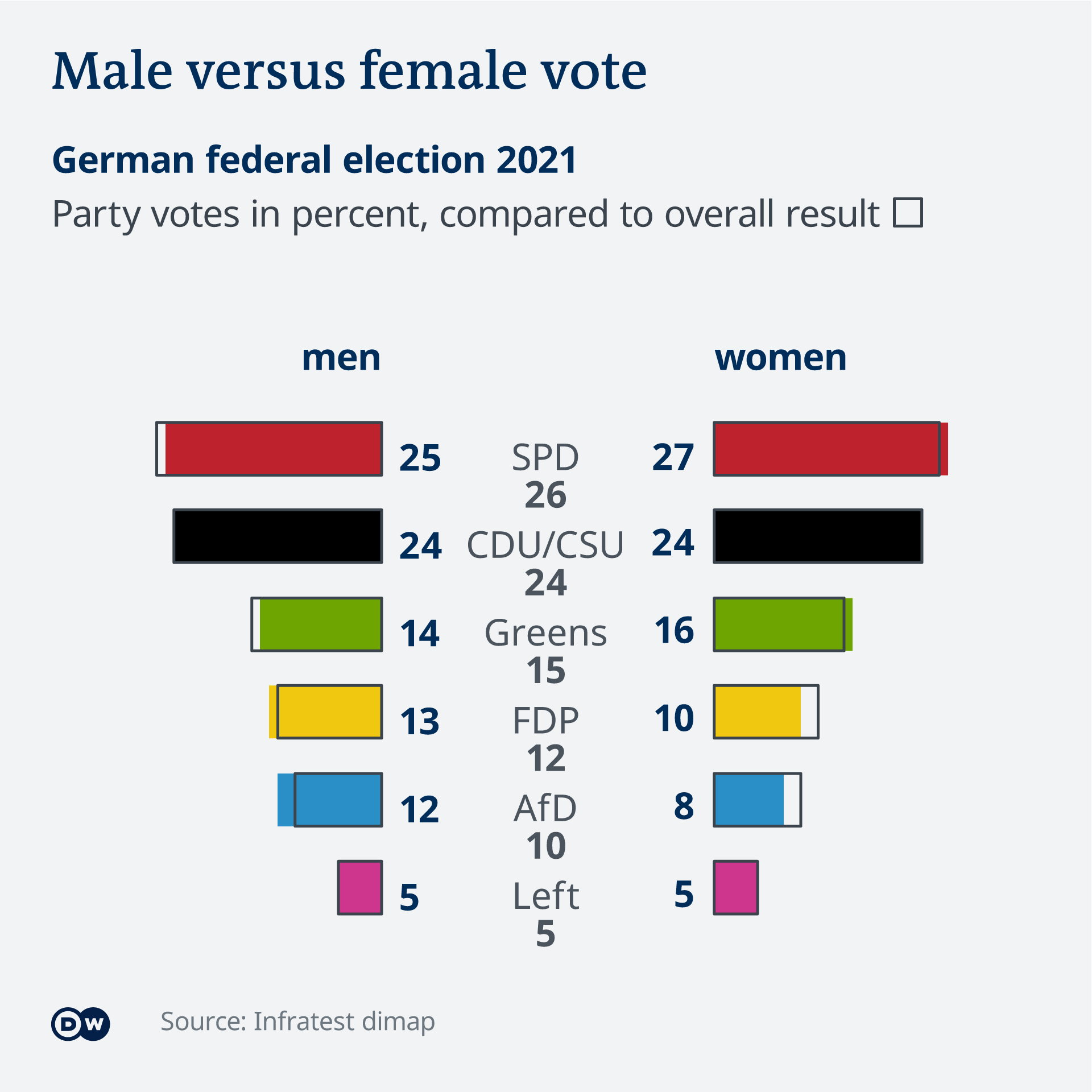 Some countries see the election outcome as "continuity" after Chancellor Angela Merkel's nearly 16-years in office. Others view it as an opportunity for greater cooperation with Germany.

The two politicians come from opposite sides of the country but the same party: the Greens. One of the candidates said it was "historic" and another proclaimed it was "madness!"