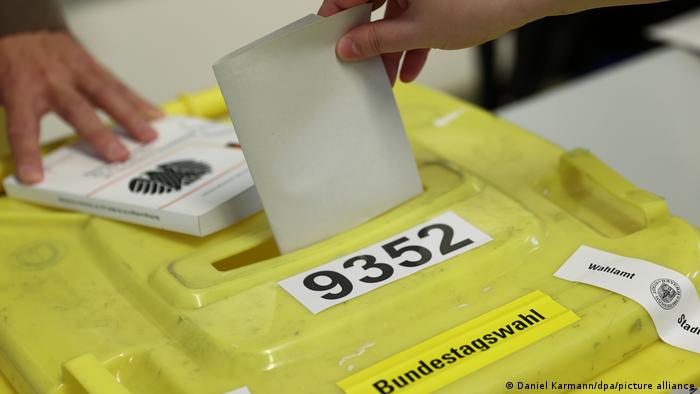 Over 60 million Germans were eligible to vote and turnout was 76.6%

According to the preliminary official result, the center-left Social Democrats won the largest percentage of seats in the German parliament, known as the Bundestag, with 25.7%.

This was over 8% down on the previous election and their worst result since World War II.

The environmentalist Greens recorded their best-ever result, coming in third on 14.8%. The neoliberal Free Democrats (FDP) also made significant gains compared to the previous electrion in 2017.

The other parties who will be represented in the new parliament are the far-right Alternative for Germany (AfD) and the socialist Left party.

Yes. Merkel did announce before the election that she would be stepping down after 16 years in office. However, she will remain in the top post for now in a caretaker capacity.

She will only be relieved of this duty when a new governing coalition has been formed, which may take a while yet.

Once a new government is in place, the German president nominates a chancellor to be elected by the Bundestag. This is typically the main candidate from the senior coalition partner in the newly-formed government.

What did the party leaders say?

SPD chancellor candidate Olaf Scholz said: "Three parties have been strengthened, therefore this is the clear mandate that the voters have formulated." The three parties refers to his SPD, the Greens and the FDP.

Armin Laschet, the leader of the CDU, contested this, saying: "None of the major parties have a clear government mandate."

"Only the person who manages to bring together opposites can become chancellor," he said. His comment referred to likely kingmakers the Greens and the FDP that have vastly different political agendas.

FDP leader Christian Lindner said his party "was and is ready to take power," pointing out that the FDP was already in coalitions in three state governments in Germany.

To the point - Germany has voted: A fresh start or more of the same?

What are the coalition possibilities?

According to these preliminary results,one option is a continuation of the "grand coalition" of the conservative CDU/CSU bloc and the SPD that has governed Germany since 2013.

Alternatively, Germany could be headed for a three-way coalition for the first time since the 1950s at the federal level.

How long are coalition talks going to take?

It is not known how long coalition talks will last. But both Laschet and Scholz have said they would like to have discussions wrapped up by Christmas in December.

But it could take longer. Following Germany's 2017 general election, it took almost 6 months of talks before the CDU/CSU and SDP eventually agreed on a grand coalition.

The Greens and FDP are already set for preparatory coalition talks with a view to then approaching the other parties as kingmakers. But the parties have vastly different political ideologies and policies, particularly on social and economic issues. The Greens' co-leader Robert Habeck described future talks on these areas as "where worlds collide."