The long road to forming a post-Merkel government

Germans have elected a new parliament. But forming a government and selecting a new chancellor will take a while. Until then Angela Merkel will remain in office.

Negotiations to form a new government can take months, but the freshly elected Bundestag gets to work relatively quickly. In accordance with the German Constitution, it must convene no later than 30 days after the election — that's by October 26 this year.

If the new Bundestag cannot immediately elect a chancellor during its first session, because the coalition negotiations have not yet been finalized, President Frank-Walter Steinmeier will ask Chancellor Angela Merkel and her Cabinet to continue serving until the new government is chosen and sworn in.

There is no time limit for this phase. Angela Merkel could still be in office at Christmas. After December 17, 2021, she would then have surpassed Chancellor Helmut Kohl's previous record of 5,869 days in office.

After the election, Angela Merkel will initially be allowed to continue with all her previous duties. These include personnel matters. So she could dismiss ministers and appoint new ones.

Appointments scheduled for the Chancellor also have to be attended. Because it is unlikely that a new government will be formed so soon, Angela Merkel will probably travel to Rome, for example, for the meeting of the leading economic powers, the G20 summit, at the end of October.

The previous chancellor does not own the gifts she received during her time in office. All gifts have been inventoried and are the property of the state. So are the desk, desk chair and works of art that the state provided for her throughout her time in office.

The new Bundestag has even more deputies than the previous one — which was already a record 709. It will be the largest Bundestag ever and the second-largest parliament in the world (second only to China's National People's Congress). The reason is the complicated German electoral law and the mandates for the "overhang" seats (Überhangmandate) and compensation "leveling" seats (Ausgleichsmandate), which ensure that the composition of the Bundestag will be proportionate to the votes for the parties.

As soon as the official final result has been determined by the Federal Election Committee and the names of all the newly elected members of parliament have been finalized, the Bundestag administration's fitters in the plenary chamber begin to reassemble all the chairs. 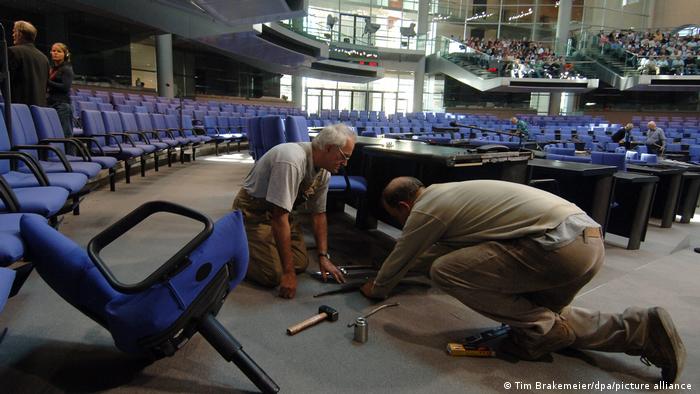 Probably the most difficult chapter after a federal election. Here, too, there are no legally-prescribed time limits. And all the parties involved know this, as they negotiate over every detail —  and thus over every scrap of power. It's all about the most important demands in the election platforms and individuals vying for particular ministerial posts.

The coalition negotiations are opened by the top candidate of the party that received the most votes in the federal election. The top candidate (usually also the candidate for chancellor) gets to choose which other parties he or she wants to work with in a government in the future. That's the procedure so far.

After this federal election in 2021, everything is different. The SPD and the CDU/CSU Union are so close in the election results that both the Union's candidate for chancellor, Armin Laschet, and the Social Democrats' candidate for chancellor, Olaf Scholz, each claim the right to begin exploratory talks with the two possible coalition partners, the pro-free market Free Democrats (FDP) and the Green Party, to form a three-way coalition.

However, the FDP and the Greens are currently so far apart on so many points in terms of their declared party goals that it will take a while for them to figure out whether they can work together in government – and if so whether with the SPD or the CDU/CSU at the helm.

And then the parties ask their members at party conventions whether they will give their consent to any coalition deal.

Winners, losers or coalition partners? Who will rule together?

The most important role of the new parliament is the election of the chancellor. He or she is elected, without debate and by secret ballot, on the recommendation of the German president. To be elected, the chancellor candidate needs an absolute majority of the deputies, known as the "chancellor majority." So far, all chancellors, including Merkel, have been elected in the first round.
If this does not happen, the constitution provides for further elections within 14 days and places another hurdle ahead of possible new elections: The person who receives the most votes in the last secret ballot round is elected chancellor. If the votes are less than the majority of the members of the Bundestag, then the German president decides whether to appoint the candidate or to dissolve the Bundestag.

Such an occurrence is extremely unlikely. 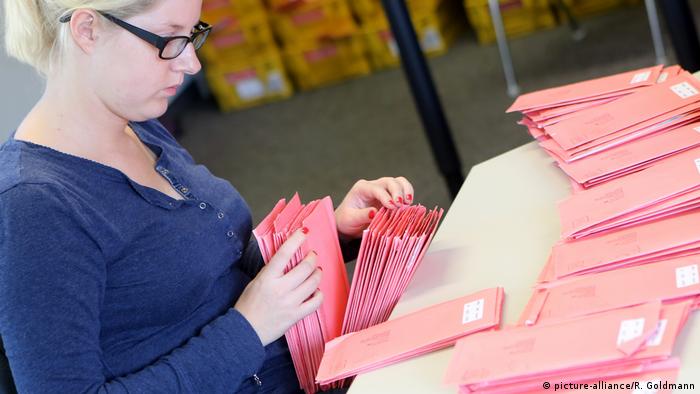 In Germany, any eligible voter can contest elections. They must send a written formal objection to the election review commission with the Bundestag in Berlin within two months of election day.

This commission processes all submissions. A decision is made on each individual challenge, and each objector receives feedback from the Bundestag. The entire procedure can take up to one year.

Objectors can also contest the findings of the election review commission and go all the way to the Federal Constitutional Court.

A German national vote has never been declared invalid.

This article has been updated following the general election on September 26, 2021.

The SPD has captured 25.7% of the vote while Merkel's conservatives saw their worst returns in history, preliminary results show. Germany now faces what could be months of messy coalition building. DW has the latest.

German election: How much money do Bundestag MPs get?

Bundestag parliamentarians are paid by the state so that they do not need a second job. But many still find ways to make an additional income — that is now being significantly restricted.

What will Angela Merkel do when she retires?

The long-serving chancellor and lawmaker is about to retire. What's next for her?