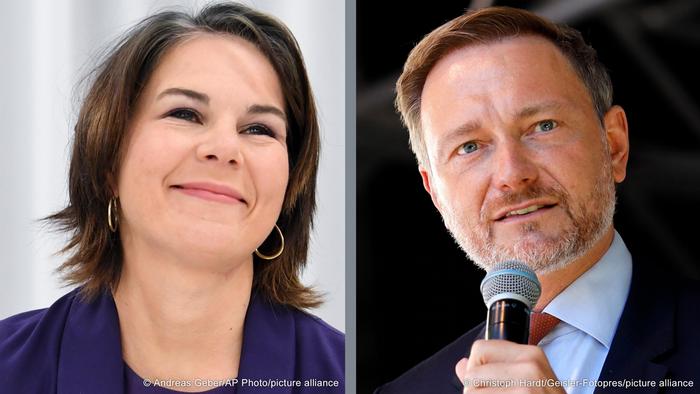 After the cards were dealt, Germany's fraught election night had apparently left two options on the table: Either center-left Social Democrat (SPD) Olaf Scholz will preside over a coalition with the Green Party and the pro-free market Free Democrats (FDP), or center-right Christian Democrat (CDU) Armin Laschet will get the chance to do so.

A grand coalition of the SPD and CDU is also mathematically possible, but that appeared to be the least-favored option among the key players on Monday.

There are current precedents for both models at the state level (the traffic light governs Rhineland-Palatinate, while the northern state of Schleswig-Holstein has had a Jamaica for the last five years), but a three-way coalition is inherently complex and has not been attempted at the federal level since the very early days of the German Republic.

Few think the new government will be able to take office before Christmas.

In the meantime, the fact that Green Party co-leader Robert Habeck is deputy state premier in a CDU-led government in Schleswig-Holstein could prove significant. "I can speak from experience," Habeck said on Deutschlandfunk public radio on Monday morning. "And it makes sense at the beginning not to look for things that divide us — but to make sure common points are not overlooked just because we're talking about the things that divide us. I can think of a few points already."

Making a choice might also expose the rift between the two Green leaders that the party had successfully buried during the campaign: Habeck's experience in Schleswig-Holstein runs counter to Annalena Baerbock's interest as stated in the pre-election TV debates, where she and Scholz virtually competed as team. 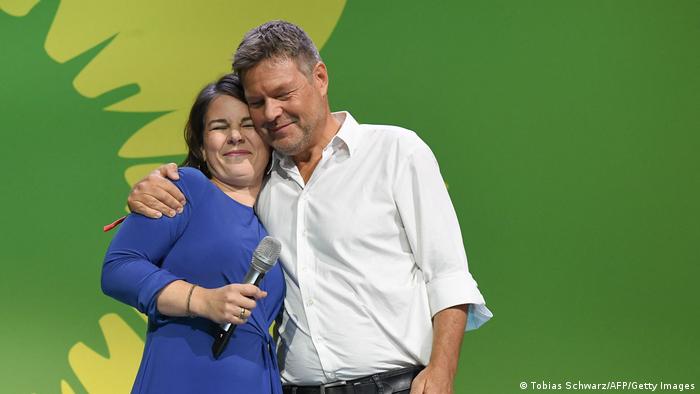 Habeck had stood back in favor of Baerbock when the Green Party named its candidate for chancellor in April. Through the subsequent weeks of her campaign, and especially after her early slipups, Habeck was asked in every interview whether he felt he might have been the better choice.

In Monday's post-election press conference, the two party co-chairs were notably cagey about who would get which role in any future government.

Meanwhile, FDP leader Christian Lindner also dropped a significant hint during the post-election TV debate on Sunday night, when he suggested that his party and the Greens should consult together first before figuring out "whatever comes afterward." Questioned directly, Baerbock kept her response vague but did not immediately dismiss the idea.

The FDP's election campaign had been focusing on the leading figure of Lindner, who has made no secret of his ambition to head the Finance Ministry.

Lindner ready to 'meet and talk' with Greens

But what common ground could the two parties find?

The basic perception is that the FDP and the Greens have similar voters (young, urban, well-educated) and much in common in social policy, but are a long way apart on economic policy.

That, at least, was the conclusion of a Berlin Social Science Center's (WZB) analysis of the parties' manifestos: The Greens and the FDP both have broadly progressive ideas about sociocultural issues like gender and racial equality and human rights, but lean different ways on economic solutions to social problems.

More than that, they could hardly be further apart on what surveys said was the biggest issue in this election campaign: the climate crisis.

The FDP has the least ambitious climate target of all the major German parties — committing only to get the country to carbon neutrality by 2050, via emission trading schemes. The Green Party, meanwhile, wants Germany to be carbon neutral by 2041, and aims to shut down Germany's remaining coal power stations by 2030, eight years ahead of the country's current target.

Whereas the Greens are more open to using government power to affect change, the FDP believes very firmly in limiting the power of government and has already said that raising taxes or increasing Germany's state debts too far would be "red lines" in coalition negotiations.

And yet, this might not necessarily be a huge problem for the Greens. According to the WZB's Pola Lehmann, the party's manifesto shows that the Greens have subtly edged to the political center since the last election in 2017, perhaps to prepare for a more center-right coalition. "The FDP and the Greens are certainly closer together," Lehmann told DW. "That's how I would read the Green manifesto. I got the feeling they didn't want to formulate the same hard-line positions as they did before, so that they might have possibilities with the CDU or the FDP."

The Greens are, according to the WZB assessment, the most centrist of Germany's left-wing parties, and use similar language to the FDP when it comes to, for example, the country's technological renewal: Buzzwords like "innovation" and "excellence" regularly pop up in the Green party manifesto. Not only that, the WZB found that the Greens' emphasis on workers' rights seems to have become less obvious than in its 2017 manifesto.

All that could mean the Greens could be persuaded to open themselves up to market solutions to the climate crisis in a center-right coalition.

So here's the conundrum: As things stand, an SPD-led traffic light coalition would seem to have a better momentum from the election, favored by three big factors: 1) Scholz won and would undoubtedly be a more popular chancellor than Armin Laschet, 2) the SPD, the Greens and the FDP are the only three major parties who made gains in the election, and 3) they have a bigger majority in parliament than the CDU, FDP and the Greens.

But viewed from another angle, a center-right coalition involving the CDU would make some sense — the FDP's oft-repeated antipathy towards bans and regulations might force the matter and could yet drag a more centrist Green party with it. The CDU, for one, has certainly not yet given up hope. Much remains to be decided.

The Greens have won 15% of the vote in the parliamentary elections. The environmentalist party will probably be part of the next government, but the Greens' dream of taking the chancellorship is over for now.