Conservative lawmakers are growing louder in their critiques of chancellor candidate Armin Laschet, who has stuck by his determination to try and form a government. DW has the latest. 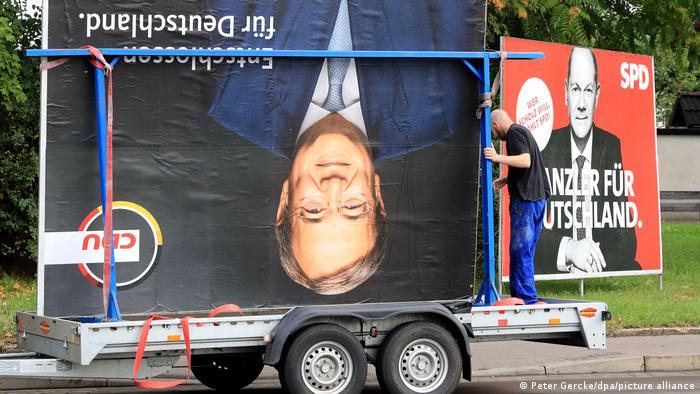 Armin Laschet is under fire for the CDU's election woes

CDU leader Laschet: 'I made mistakes'

German tabloid Bild reported that CDU leader Armin Laschet admitted mistakes at the CDU/CSU parliamentary group meeting: "We were able to prevent red-red-green, but that is also the only consolation. We have to work through the result, in the opposition, but also in the government." Laschet continued, "I have made mistakes. Some culpable, some unintentional. I want to apologize to those who suffered as a result."

The CDU and CSU parliamentary meeting is starting shortly. Ahead of the meeting, Ralph Brinkhaus, the parliamentary group leader of the CDU/CSU group in the German Bundestag, and Alexander Dobrindt gave statements to the media.

Brinkhaus said: "We are ready to negotiate with the Greens and the FDP, but not any price."

He commented on the result from Sunday's election that saw the party lose 8% points compared to the last election, saying: "We are all very sad about the result."

He said that "there's no way to make it look better."

Markus Söder, the leader of the CSU, the Bavarian sister party to the CDU, congratulated the SPD and its chancellor candidate, saying: "Olaf Scholz currently has the best chance of becoming chancellor, unequivocally."

Söder also called for "stability and order." He distanced himself from rumors in Berlin, including about who could lead possible exploratory talks on a Jamaica coalition — the name for a coalition between the CDU, FDP and Greens due to their party-colors corresponding with those on the Jamaica flag.

Some in the CDU/CSU conservative bloc are calling for CDU leader Armin Laschet to step down after the bloc suffered its worst election result since World War II.

The Berlin Senate, the capital's executive governing body, has acknowledged problems in Sunday's elections. But it rejected the impression of Berlin-wide chaos, Germany's public-funded ARD reported.

Senate Chancellery head Christian Gäbler said after a Senate meeting that problems were encountered at a double-digit number out of a total of 2245 polling stations.

So far, there has not been any indications of such serious errors that a repetition of Sunday's ballot looked likely, Gäbler said.

Local media on Sunday reported that some voters faced waits of over an hour before being able to cast their ballots as well as ballot paper shortages and mix-ups at polling stations. 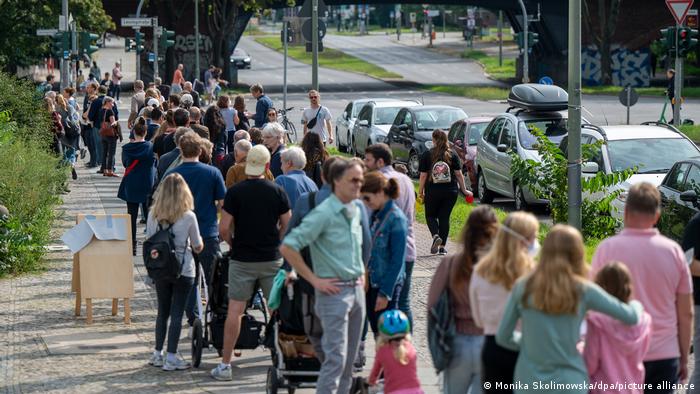 DW political correspondent Giulia Saudelli said that parties are beginning to prepare for coalition talks "behind the scenes."

She added that such talks "could get complicated and could last a long time." Both the center-right CDU and center-left SPD have mooted a three-party coalition with kingmakers the FDP and Greens. But party members and experts have pointed out that there are few overlaps between the policies of the environmentalist Greens' and pro-free market FDP's.

According to German media network RND, some within the CDU want Bavarian state premier Markus Söder to lead potential coalition talks with the Greens and FDP as the conservative bloc's would-be next chancellor.

Söder is the lead of the CDU's Bavarian sister party, the CSU, and lost the group's most recent leadership election to Armin Laschet.

Much of the blame over the CDU's poor perfomance on Sunday has been blamed on Laschet, and his unpopularity appears to be growing in the aftermath. According to the report, the possible pivot to Söder came after CDU members learned that the Green party may put party co-chair Robert Habeck forward as their possible vice chancellor in a future government, instead of chancellor candidate Annalena Baerbock.

Fight for the soul of the Green Party

More left-leaning members of the Greens are meeting today, according to German media reports, in the hope to counter what they see as the party losing touch with its radical roots and giving up some of its core values in order to join the next government. In the spotlight is the possibility of a coalition with the pro-free market FDP.

Decisions about the future "are decided by the party, not two people in a private discussion," member Jürgen Trittin told Der Spiegel magazine, referring to party leaders Baerbock and Habeck.

Germany "needs a government that will keep in line with 1.5 degree [Celsius]" global temperature increase goals, Trittin said. He added that he found it distasteful that Baerbock was apparently being scapegoated in favor of Habeck.

DW political correspondent Giulia Saudelli said while there can be no guarantees, the German public have had their say on the coalition they prefer to form a government.

"In politics, as in life, there are no certainties," she said. "And coalition talks can become very complicated and sometimes fall apart. But what we know now is that the Social Democrats are taking on this election result as a mandate for them to form a government, in this case with the Greens and the Free Democrats, and it seems like the German public are also in favor of this option. Polls show that a majority of Germans would like to see this three-way government be formed."

Where do the AfD go from here?

Germany's eastern state of Saxony bucked the nationwide downward trend in Sunday's election with the far-right Alternative for Germany (AfD) party emerging as the strongest, comfortably ahead of the center-right Christian Democratic Union (CDU). The Greens barely managed to get above 5% in the state. In neighboring Thuringia, the AfD also narrowly beat the Social Democrats to become the largest single party.

Read more here to find out what's next for the AfD after the party lost around two percentage points in comparison with its 2017 result.

The party need a "speedy rehabilitation" of both political content and top personnel, said MIT, the CDU's economic policy arm in the southern state of Baden-Württemberg. The group pointed not only to Sunday's disappointing result on the federal level, but also the losses it suffered in Baden-Württemberg's state elections this year and in 2016.

The wealthy southwestern state was a longtime CDU stronghold, and remains so on the federal level even as state and many municipal offices have been ceded to the Green Party.

Despite calling for fresh faces, MIT said it was also a mistake not to put Friedrich Merz, Chancellor Merkel's and candidate Armin Laschet's former rival for party leadership, in a more prominent position during the campaign.

Poll: Most Germans against Laschet chancellorship

A survey carried out by the research firm Civey for the Augsburger Allgemeine newspaper found that 71% of respondents thought it was wrong for the CDU to form a government when the vote tallies showed the party had lost support and come in second place.

Only 55% of CDU voters stood behind leader Armin Laschet, the study found.

A similar poll carried out by the German mass-circulation Bild found that 58% of respondents did not think the CDU had a mandate to govern.

Greens: 'The conservatives lost, the direction is clear'

The Greens' parliamentary spokesperson, Lisa Badum, believes her party can take heart from both the improvement on their result in 2017 and that they gained a large share of the younger vote, "whereas the conservatives lost this election, so for me the direction is quite clear," she told DW.

"What we have seen with the election is a clear mandate for tackling the climate crisis," she said. "We gained nearly 6% [on 2017] and our main topic was climate protection. Especially the younger generation, they voted for us, so I think it's quite clear people want something to go forward."

Badum said it was important that the next government improve upon the record of the previous as she looked toward coalition talks.

"We had a failure in climate politics in the last years of the grand coalition," she said. "That's why we want a change [...] that's why the Greens are so important in government. Every party, except the AfD, addressed the topic of climate protection, so every party has to deliver now."

SPD speeds out of the gate

As if trying to head off any attempts by the CDU to begin coalition talks, the center-left SPD said on Tuesday that it would be ready to start negotiations with the Greens and FDP as soon as this week.

"We have invited them to begin coalition discussions," said Rolf Mützenich, the SPD's parliamentary chair, "already this week, if they wish."

He added that the Social Democrats "are ready for not just speedy, but also open discussions. If there are problems [between the parties], they will be solved on the way."

During Germany's last election in 2017, coalition talks lasted nearly six months. The SPD initially appeared ready to take its time, with Olaf Scholz calling a promise to have a government before Christmas "absurd."

However, he did a quick about-face after the CDU also claimed a mandate to form a government, saying that the Christmas deadline could be met.

What to expect on Tuesday

Members of the top four parties are set to hold closed-door meetings, with press statements expected later in the day. Representatives from the Green Party and the FDP are expected to meet to try and find common ground between their disparate visions for Germany's future.

The conservative bloc of outgoing Chancellor Angela Merkel's CDU and its Bavarian sister party, the CSU, is taking stock after suffering its worst federal election outcome since the party's founding in 1945.

Much of the blame has been laid at the feet of Armin Laschet, whose campaign was marred by gaffes and a perceived lack of Merkel's trustworthy and competent persona. Despite this, Laschet announced on Monday that he would still try to form a government with himself as chancellor, a move some CDU members are becoming increasingly impatient with.

"We should humbly and respectfully accept the will of the voters, with modesty and composure," said Hesse's State Premier Volker Bouffier, a CDU member.

Tilman Kuban, the head of the CDU's youth organization, echoed Bouffier's sentiments, saying "we have no mandate to govern. We lost the election. Period."

The CDU was clearly not united in this thinking, however, as Hamburg's party chief Christop Ploss told public broadcaster ARD on Tuesday morning that it was important to at least try to form a coalition with the Greens and FDP.

"We don't know if we will be in the government or in the opposition," he said, "but a representative is being chosen now to lead exploratory coalition talks."

The Day with Brent Goff: Hurry up & wait