Germany's top diplomat spoke after a virtual meeting with other treaty signatories. He said the group was hopeful of a US return to the agreement and will take a "positive" approach. 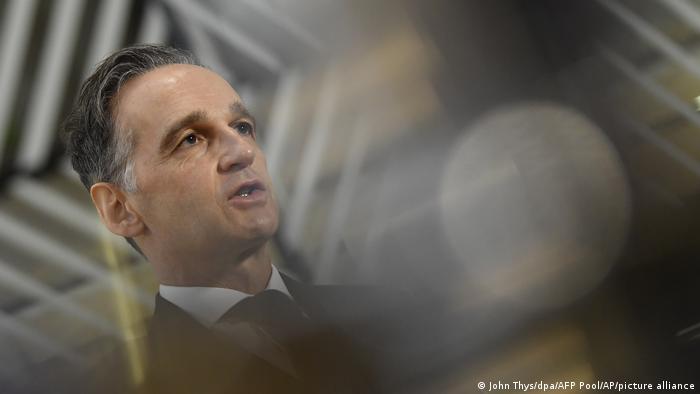 JCPOA signatories are intent on saving the deal when the US returns but would Iran accept expanded terms in a new one?

German Foreign Minister Heiko Maas on Monday warned Iran: "The opportunity that is now being offered — the last window of opportunity — must not be squandered." The top diplomat said the Joint Comprehensive Plan of Action (JCPOA), better known as the Iran nuclear deal, was at a crossroads and that the coming weeks and months would determine its fate.

Speaking after a remote video conference, the first meeting of high-level representatives from signatory countries in more than a year, Maas said the US "maximum pressure campaign" and Iranian intransigence had pushed talks into a "downward spiral."

A joint statement released by Maas and the foreign ministers of Iran, China, Russia and the UK acknowledged their desire to see the treaty upheld and greeted the prospects of a US return to it under incoming President-elect Joe Biden as "positive." President Donald Trump unilaterally withdrew the US from the 2015 agreement in 2018, decrying it as "the worst deal in history."

Maas made it clear to Iran that: "To make possible rapprochement under Biden, there must be no more tactical maneuvers of the kind we have seen plenty of in recent times — they would do nothing but further undermine the agreement. We Europeans further underscored the fact that more will be required than a simple recognition of terms."

Maas was echoed by UK Foreign Secretary Dominic Raab, who said: "I made it absolutely clear Iran must not implement the recently announced expansions of its nuclear program. To do so would undermine the opportunities for progress we hope to see in 2021."

A joint statement said the "full and effective implementation of the JCPOA by all remains crucial."

The old deal, a new deal or no deal?

After being placed under US sanctions, the Islamic Republic of Iran has recently begun contravening the terms of the agreement meant to curb Iran's nuclear program in exchange for financial relief.

Although Iran allowed inspectors from the International Atomic Energy Agency (IAEA) to monitor its nuclear sites — which it continues to do — and fulfilled some other obligations, it has exceeded uranium enrichment limits.

There is some hope that new life can be breathed into the deal when Biden, who was vice-president when the deal was originally signed, meets Iranian President Hassan Rouhani, who has a reputation as a pragmatist.

The larger question will pertain to whether Biden will return to the old deal, as preferred by Iran, or push for a new, more expansive deal that would address Iran's human rights violations and its malign activities across the Middle East.