Chancellor Angela Merkel and Sweden's Prime Minister Stefan Lofven have called for a coordinated and mandatory system for the redistribution of asylum seekers within the EU. The UN has demanded a "global response." 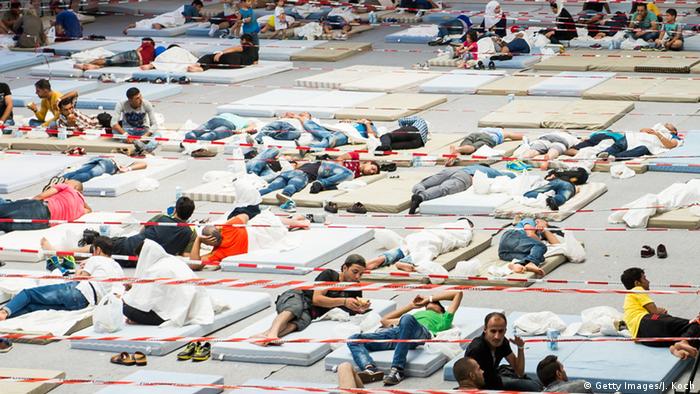 The leaders of Germany and Sweden met in Berlin on Tuesday to discuss the need for an EU-wide response to the current refugee crisis, as asylum seekers continued to stream into Europe.

German Chancellor Angela Merkel underlined at the meeting once more that a special effort was needed to deal with the crisis, stressing that all European Union nations had to communicate with each other. She spoke of the "right spirit of mutual respect," warning that there could be tremendous damage if Europe looked away at this time.

"The entire world is looking at us," Merkel said, adding that whatever steps were to be taken in addressing the flow of migrants, she was not looking at short-term solutions.

"Nobody was able to expect the number of refugees and no one can look into the future. But when people are in poverty or in an emergency, we have to solve these problems. And we need everybody to work with us," she said.

"We need to show to our people in our countries that we are willing to solve political conflicts together." 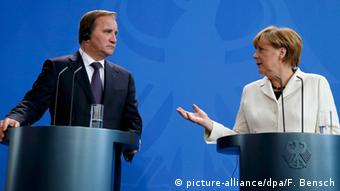 Lofven (left) said that voluntary solutions were "not enough"

"There is another step that needs to be taken because neither Germany nor Sweden can determine the number of refugees, given that it stems from the situation [on the ground]," Merkel explained.

"We need an open system to share out those with a right to asylum."

Ahead of the meeting with Merkel, Sweden's Prime Minister Stefan Lofven underlined that the EU has to do more as an entity. Voluntary solutions were "not enough," Lofven said, citing the need for a "permanent, mandatory redistribution system when catastrophes cause a surge in the number of refugees in one country."

Split in the European Union

Germany, along with Sweden and Austria, has also requested more help from neighboring countries to cope with the throngs of people. The three countries have received thousands of refugees, many fleeing conflicts in Syria and Iraq, while other EU countries have resisted calls for the introduction of a quota system to redistribute asylum seekers.

Germany and Austria agreed on Saturday to take in refugees that had been prevented by Hungary from traveling further west. Hungary had cited EU rules that required asylum seekers to file applications in the first country upon their arrival in the EU, under the so-called Dublin Regulation. But Germany and Austria decided to momentarily suspend the accords.

Peter Sutherland, UN Special Representative for Migration and Development, told reporters in Geneva that the crisis rocking Europe needed a "global response," insisting that countries worldwide had to be asked to do their share.

Hinting at the need for an international conference "where every country is held up to the spotlight," Sutherland, the UN's top official in charge of migration, said: "We should have a European response as part of a global response."