The country's health minister is aiming to extend testing capacities and also wants to make home tests available to all once they receive regulatory approval. 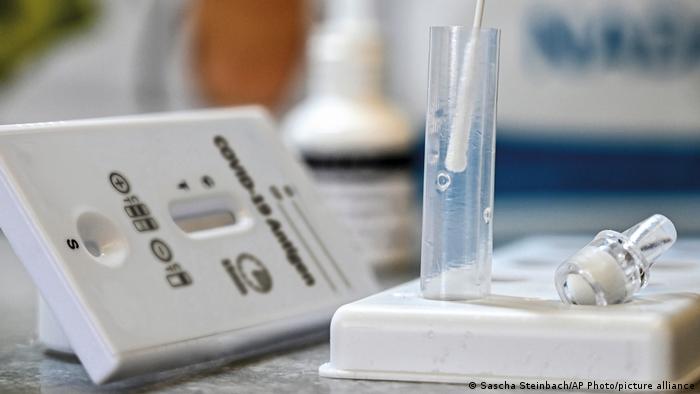 Rapid tests can give quick results, but aren't as sensitive as swab tests

People in Germany will soon be able to get rapid antigen tests free of charge, Health Minister Jens Spahn announced on Tuesday.

The German government is pushing to extend its national testing capacity as the country looks for paths to roll back lockdown restrictions and re-open businesses and schools.

What are the rapid test plans?

"There are enough of them on the market by now," the minister said on Twitter.

In an interview with German media group RedaktionsNetzwerk Deutschland (RND), Spahn said the federal government plans to cover the costs for the tests.

What is the status on at-home tests?

Tests that can be conducted at home are expected to be approved by regulators "soon," Spahn said.

Once the greenlight is given, the tests should be "available for everyone," he said on Twitter.

"These testing options can contribute to a safe everyday life, especially in schools and daycares," he said.

Spahn also said the government is in negotiations with manufacturers to keep the costs for at-home tests low.

How have things worked until now?

Until now, most people in Germany would have to purchase quick tests from testing centers.

The government has also approved their regular use in nursing homes and hospitals. In the event of a rise in cases, the tests can also be used in schools.

The new plans would expand their use and make them more accessible. The costs for rapid tests generally range between €30 to €60 ($36 to $73), although some centers offer them for less.

Antigen rapid tests do not need to be sent to a laboratory, but their results are not as exact as PCR swab tests.

The Robert Koch Institute for infectious diseases currently recommends that a swab test be done in the event a rapid test comes back positive for COVID-19.

How is Germany faring with the pandemic?

The number of new daily COVID-19 cases in Germany has been slowly falling in recent weeks.

Chancellor Angela Merkel's government set a new benchmark for re-opening the economy — targeting an infection rate of under 35 new cases per 100,000 people.

Concerns about the spread of new and more infectious coronavirus variants in Germany led the government to extend the country's lockdown until early March.

Researchers have found that data recorded by fitness trackers like the Apple Watch make for a good indicator on whether the wearer will test positive for coronavirus — a "breakthrough" in the battle against COVID.

DW's Sergey Satanovskiy was one of many people who took part in a testing program for the Russian COVID-19 vaccine, Sputnik V. After receiving two shots, he visited his grandmother — and came in contact with coronavirus.