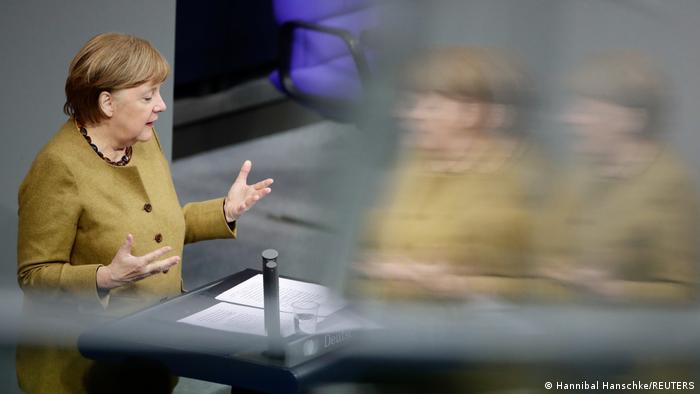 Germany is battling against the possibility of a third wave, according to Merkel

Chancellor Angela Merkel acknowledged on Friday that Germany's vaccine rollout had been a "disappointment" after a slow start, but said previously empty vaccination centers would be used to their full potential within weeks.

In December, Germany's vaccine program began in earnest, and the country has so far administered about 3.8 million shots.

But the vaccination locations set up in exhibition halls and sports centers across Germany have seen few patients thus far, as many of the jabs have been administered to people in nursing homes and hospitals.

The government has reported that deliveries of the three vaccines already approved would be ramped up in the next few weeks, and by Easter all people in the highest priority group will have been offered the COVID-19 jab.

"These centers will be at full capacity at the end of March, April," Merkel said.

Lockdown needs to be gradual

Merkel also called for caution in the easing of coronavirus restrictions, in order to prevent a third wave of infections.

In an interview with public broadcaster ZDF, she said: "It depends on us and smart opening moves whether we will get through the pandemic without a strong third wave — or if we are too careless and perhaps will have rising numbers again."

The federal government, along with the 16 state premiers, agreed on Wednesday to prolong the months-long lockdown until March 7, though hairdressers and schools are set to reopen sooner.

Merkel said the decision to open schools was already "a bold step."

It is up to each of the German states to choose when to send children back into classrooms, with many set to take that step as early as February 22.

Health Minister Jens Spahn said Friday there had been an "encouragingly strong" reduction in the numbers of infections in Germany.

But he warned that the progress was still insufficient to justify lifting the lockdown, pointing to the risks posed by more virulent strains of the virus that have emerged in recent weeks.

"Better to hold on now for a while longer than risk setbacks," he said.

Some states could open up parts of society even sooner than March 7 if infection rates fall enough, as part of the agreement struck between Merkel and the 16 premiers.

In accordance with the agreement, the "next opening step" can come when new cases fall to 35 or fewer per 100,000 residents over a seven-day period. This would include the reopening of high-street retailers, as well as museums and galleries.

Some German districts already have a seven-day incidence rate of below 35. However, none of the 16 states as a whole has reached that goal.

While finding a way out of the lockdown becomes slightly more feasible, finding a way into the country became more difficult this week.

The Czech Republic, Slovakia, and parts of Austria were the latest regions to be added to the list of "areas of variant concern," according to the Robert Koch Institute (RKI).

In addition, from Sunday, people will not be allowed to enter Germany from those regions, except for special circumstances.

German interior minister Horst Seehofer said that checkpoints would be established on the border, but that commercial travel would not be disrupted. Returning Germans and essential workers such as doctors will also be exempted.

The EU is looking for ways to secure more jabs as coronavirus mutations spread across the bloc.

COVID: No special freedoms for the vaccinated in Germany

Should those who have been vaccinated against the coronavirus be granted free travel or access to restaurants and cinemas? A debate on these issues is raging in Germany, with its ethics council weighing in.

European Commission chief Ursula von der Leyen says the EU made mistakes with its sluggish vaccine rollout. However, speaking to the European Parliament, she defended the strategy of joint procurement.

Coronavirus: How to combat pandemic fatigue

With the lockdown in Germany set to last at least until March 7, and with public support for restrictions wavering, we talk to psychologists and communicators about the challenges and pitfalls facing the government.