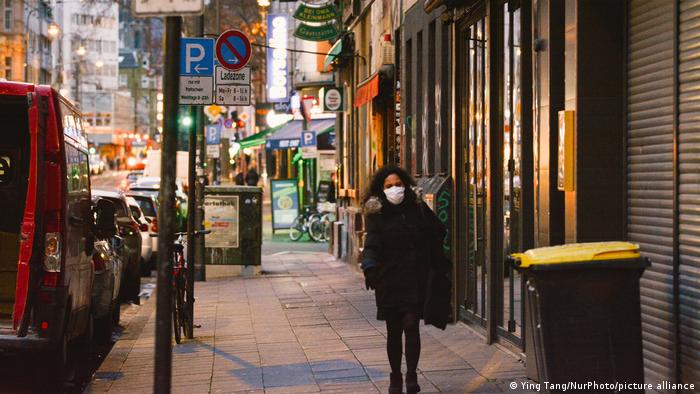 Germany has been locked down since November

Germany's federal government and state leaders agreed on Wednesday to extend the nationwide shutdown until March 7, beyond the previous February 14 deadline.

Though overall infection numbers in the country are declining, concern is rising about new variants.

The current shutdown began in November and was extended and toughened before Christmas, with the number of COVID-19 patients threatening to overwhelm hospitals. A leaked draft statement on Tuesday stated that Germany had made progress in curbing the rate of infection.

Following Wednesday's summit, Saxony State Premier Michael Kretschmer said the relaxation of restrictions would be discussed when the seven-day case index drops below 35 cases per 100,000.

"We will talk about that in March. Everyone should remain cautious: We don't want to be careless," Kretschmer said.

A decision paper released after the meeting said Chancellor Angela Merkel and the state leaders would meet again on March 3 to assess the situation.

Other measures that were discussed included:

What are the current rules?

Germany's national disease control center last week said that the more contagious variant of the virus first observed in Britain has now been seen in most of Germany's 16 states.

Another variant from South Africa has also been reported several times in Germany.

"Considering the virus mutations, the steps to lift the restrictions must come carefully and gradually in order to avoid risking the successful curbing of infections," the draft document had stated.

Debate over schools and kindergartens

The reopening of schools is a major point of contention when it comes to lifting the restrictions. Those in favor say it would remove the burden of homeschooling from parents and ensure that underprivileged children don't fall behind.

However, the head of the German intensive care association, DIVI, on Wednesday warned that reopening schools and kindergartens would lead to a re-emergence of virus cases.

"Schools and kindergartens are unfortunately places where the virus is passed on," DIVI head Gernot Marx told daily newspaper the Rheinische Post.

"The kids carry it into the families and most teachers are not vaccinated. As an intensive care doctor, I am therefore telling you: This is irresponsible."

At the same time, researchers with the University Medical Centre Hamburg-Eppendorf found that one in three children in Germany has suffered from mental health problems during the coronavirus pandemic. They urged schools to reach out to students regularly, German local media reported.

Concern grows over lasting impact of pandemic on children