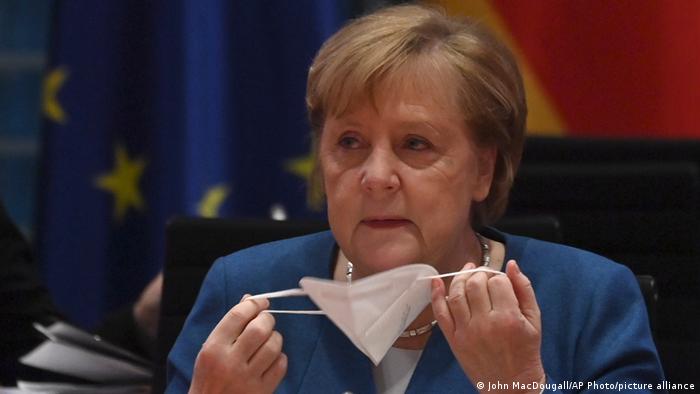 On January 27, 2020, the year still seemed uneventful. That was, until an employee of a firm outside Munich, with close business ties to China, tested positive for the novel coronavirus. Since then, hardly anything has remained the same.

The year saw people in Germany, like in most of the world, put a halt to shaking hands and embracing. They stayed home and avoided contact with other people. New words dominated everyday life: Reproduction rate, incidence rate, quarantine, intensive care units (ICU), excess deaths, social distancing and masks.

Prior to the positive test, most people were unaware that the highest infection control authority in Germany is the Robert Koch Institute — but one year later, it is common knowledge.

Virologists, such as Christian Drosten of Berlin's Charité hospital, became household names. The health minister, Jens Spahn (CDU), topped ratings among politicians. On April 23, Spahn told the Bundestag: "In a few months, we will have to forgive each other for many things." 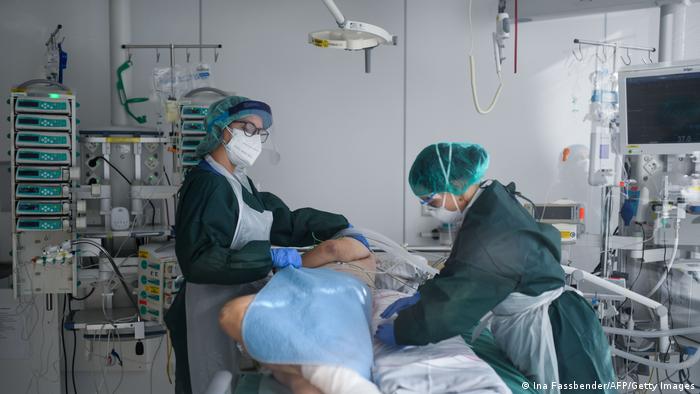 Over the past year, German has seen over 50,000 COVID-related deaths

Looking back, Spahn told DW in January 2021: "We took it very seriously back then and adapted our systems accordingly. But I don't think anybody expected things to develop like that in the next twelve months, in Germany, in Europe, in the world. And it is still dominating our lives."

In the meantime, more than 50,000 people have died of COVID-19 in Germany. And the virus continues to dictate everyday life.

A first death, A first cluster

In early 2020, the problem seemed so distant from Germany — but that would soon change. The country reported its first COVID-19 death on March 8. Two days later, there were infections in all 16 federal states. After a Carnival event, the city of Heinsberg in North Rhine-Westphalia became home to the first big cluster in Germany.

On March 18, Chancellor Angela Merkel addressed the nation on TV. Her words could hardly have been more drastic. "It is serious. Take it seriously. Not since German Reunification, no, not since World War II has this country faced a challenge that requires us to act in such solidarity and unity." 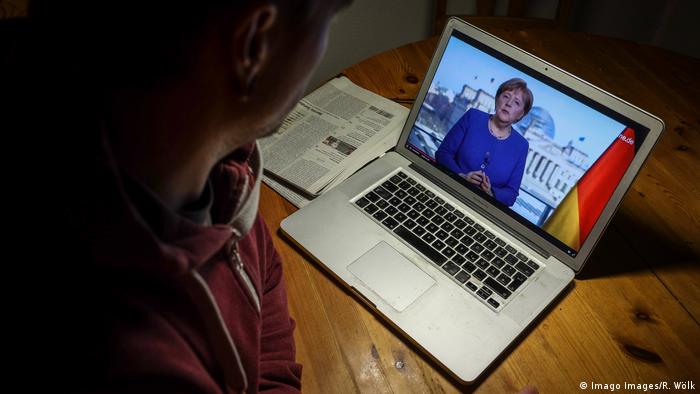 Chancellor Merkel did not mince words in her address to the nation in March: "Take this seriously!"

Within a few days, drastic measures were put in place. A new word made the rounds: Lockdown. Restaurants and cinemas were closed down, along with schools and kindergartens. Business more or less were grounded to a halt.

The Bundestag adopted a huge rescue package of €156 billion for the economy. This was no time for austerity. As travel plans were scrapped, many people got their first taste of working from home.

Supermarkets remained open but only for people wearing masks. Panic-buying set in. Some food items, including toilet paper, grew scarce.

The TV images from severely hit towns and cities in northern Italy struck a chord in Germany, too. So far, few people knew anyone directly affected but slowly and steadily, the fear grew. 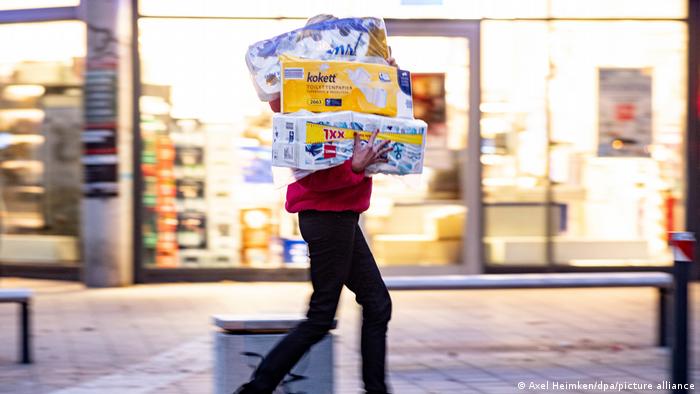 News of a lockdown last spring sent people scrambling to the supermarkets, and made toilet paper a hot commodity

But new heroes also emerged. Supermarket cashiers, doctors and nurses in care homes were praised, with many applauding the new "frontline" workers from balconies.

Now, in early 2021, many nurses and care workers are running out of steam.

In an interview with DW, Franz Wagner, president of the German Council of Care Workers, described the strain on care workers as "enormous.”

"This is manifested on the one hand by the sheer volume of work and on the other by the fact that many of our colleagues have either had to go into quarantine or have been infected themselves. Add to that the experience of the high death rates in intensive care and nursing homes," he said.

Spahn: 'The crisis is at its peak'

That being said, the lockdown in March 2020 worked. Infection rates sank and the German electorate was satisfied with its government. Foreign newspapers were full of praise for German efficiency and clarity. And indeed, most citizens cooperated with the restrictions, which were less severe than in Italy, Spain or France. Small gatherings were still allowed and freedom of movement was barely curtailed. Cycling was suddenly all the rage. The healthcare system held up better than in many other countries. 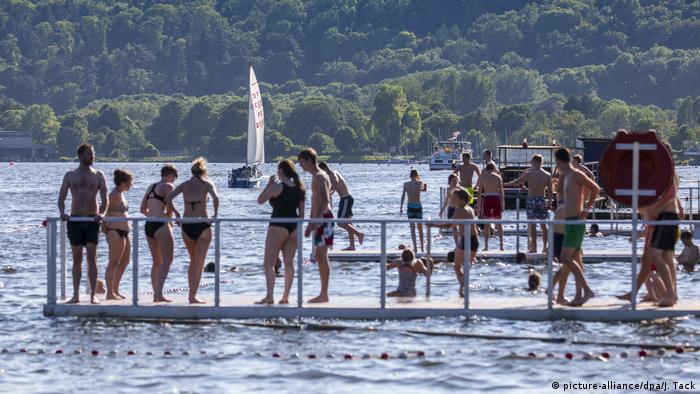 With infection rates dropping during the summer, many let their guard down

Eventually, summer came along and the infection rate fell — and soon after most of the restrictions were relaxed. But politicians broke a cardinal rule: They rested on their laurels.

By this point, the Mainz-based pharmaceuticals company BioNTech, which is partnered with the American firm Pfizer, had already indicated that it was well on the way to developing a COVID-19 vaccine. The US placed a binding order for several million doses of the vaccine in the summer. The EU, however, hesitated — and hedged its bets with several different manufacturers.

Word gets around that, while Chancellor Merkel is said to still be worried, many federal state premiers were pushing for more restrictions to be lifted. Step by step, schools reopened. Restaurants, too, under strict conditions. The economy lurched back into action. The number of daily new infections in Germany fell below 1,000 in May.

There had already been protests against the restrictions. A group calling itself "Querdenker," or "contrarians," argued that they were an unconstitutional infringement on civil liberties. 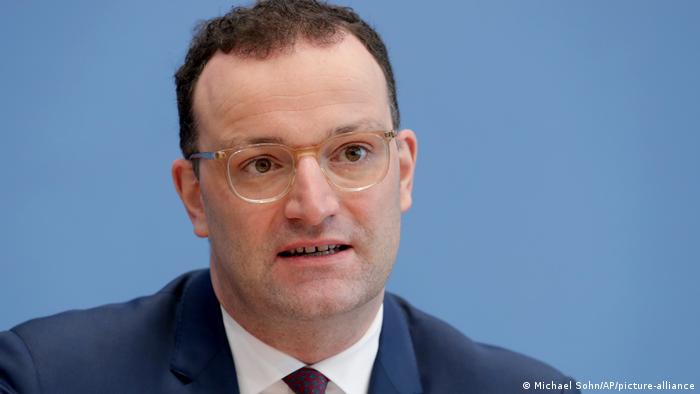 In late August, the police broke up a demonstration with an estimated 40,000 participants for flouting hygiene rules. The Querdenker were among them, along with far-right groups and representatives of the "Reichsbürger" movement, which translates to "citizens of the German Empire." One mob tried to occupy the steps of the Reichstag building.

The majority in Germany, however, simply enjoyed the summer, despite inconveniences such as masks and restrictions on gatherings. Many basked in the sunshine — and the illusion that the worst was over.

As autumn approached, signs of a second wave of the pandemic became apparent. In early August, daily new infections rose above 1,000. By mid-September, that figure had doubled and by October 8 it had grown to 4,000. Toward the end of the month, Merkel warned that unless action was taken, Germany would have 20,000 new infections per day by Christmas. 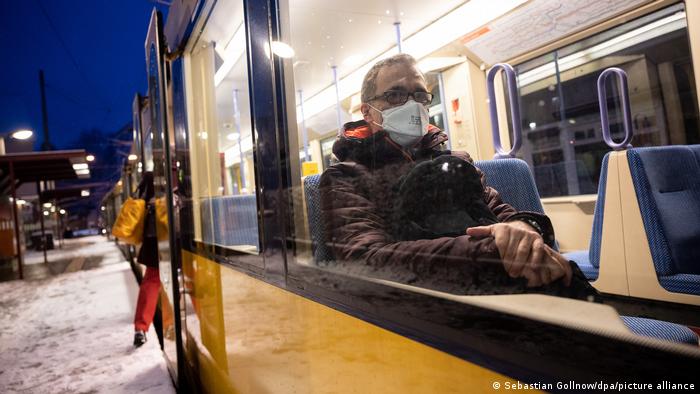 Masks have become a part of everyday life in Germany

In reality, this threshold was reached a good deal earlier. Then came the second lockdown, in early November. Gatherings were restricted to two households; bars and restaurants had to close down again; and tourism was grounded to a halt, just like it had in spring. Still, stores remained open, as did schools. By the year's end, Germany's inoculation program had begun, with the BioNTech/Pfizer vaccine — two weeks later than in the United Kingdom. It had taken longer to get approval from the EU.

But the vaccination program did not start smoothly — logistics were difficult, production was stalled. Germany was no longer the shining example of infection control. Other countries have taken the lead, like Israel, which has outstripped other countries when it comes to inoculations.

Back in Berlin, Merkel calls the pandemic "the disaster of the century."

Restrictions were tightened again, officially until mid-February. The lockdown had an effect but only to an extent. The daily infection rate fell, but only slightly. Yet hope and confidence have been replaced by the fear of a new mutation that appears to be more infectious. Death rates remain shockingly high, especially in nursing homes.

The federal government says everybody in Germany will get the chance to be vaccinated by autumn — a year and a half after Germany's first reported case of COVID-19.

How long until we stop the spread of COVID-19?