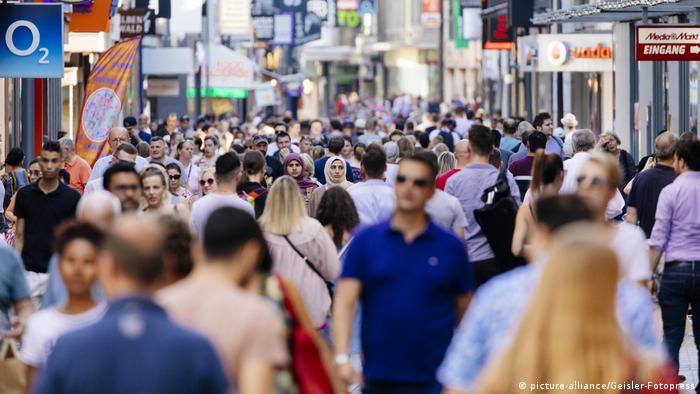 DW: According to your estimates, the German economy will need 400,000 immigrants each year to remain competitive. Why is that?

Herbert Brücker: Since the 1970s, Germany's birth rate has declined quite dramatically. At the same time, average life expectancy has been going up. Without immigration, the potential number of workers in Germany would decline by 40% by 2060. With net immigration of about 400,000 people each year, we can keep this figure just about stable. But by 2060, many more people will have entered retirement — and they'll have to be financed by same the number of workers as today.

Your research shows that in 20 years, one in three people in Germany will have a migrant background. What do you base your calculation on?

You expect the largest share of immigrants will come from Ukraine and the Western Balkans. Why is that?

Migration from countries that were included in the first round of EU enlargement to the east has largely dried up. Bulgaria, Romania and Croatia still offer considerable potential, though that's gradually shrinking as average per capita income in those countries grows. And many of the young people from those countries who are willing to migrate to Germany have already done so. So that means countries bordering on the EU's outer edges will come into play, namely Ukraine and the Western Balkan states. There, people are still quite open to migration, as average per capita income is low. But so far, they have had limited opportunities to make the move to the west.

What would be the consequences of a mass migration from, say, Ukraine?

If people were allowed to move about freely, the highly-skilled, medium-skilled — and possibly also low-skilled workers — would migrate. But the prospect of migration has also seen an increasing number of people invest in their future at home. More and more people are getting university or vocational training degrees because they know that this can earn them more money abroad.

World in Progress: Integrating in Germany

We have noticed that the number of university students and those enrolled in vocational training has risen significantly in countries that transitioned to market economies. In countries belonging to the first round of EU eastern enlargement, that number has actually doubled. But not all these countries are equally affected by brain drain; some of those who leave come back. But people with medical degrees, for example, tend to leave poorer home countries in droves for high-income countries. And that, of course, hurts their home countries.

What impact does immigration have on German society in general?

Developed societies are growing more ethnically diverse. Today, Germany's migrant population is no longer just made up of Turks, Italians and people from the former Yugoslavia. Currently, most foreign students studying in Germany come from China. People are willing to bridge ever further distances, because the cost of travel and communication is decreasing.

That means there will be no single group that dominates the country. Instead, there will be different groups from different cultures who will have to get along with each other. By and large, that has been working fairly well. We know from our research that native Germans and foreigners have integrated surprisingly well. And we need to accept that big cities no longer have ethnically homogeneous populations. Cities will become more diverse, and maybe this will reduce problems associated with immigration in the long term.

We have observed that EU migrants are better integrated into the British labor market than Brits themselves. They pay more taxes and make greater contributions to social security, and are better educated than their British peers. They have greatly contributed to the British gross domestic product and the welfare system.

The UK has been less successful, however, handling immigrants from third countries [outside the EU — Editor's note] and the Commonwealth; they aren't as well-integrated into the labor market as EU immigrants. The data tells us that Brexit will negatively affect the UK, because it will lose many high-skilled workers from new EU member states.