Germany and the EU have pressured Libyan authorities to do more to prevent migrants from crossing the Mediterranean. The Left party in the Bundestag has warned that refugees returned to Libya face "inhumane conditions." 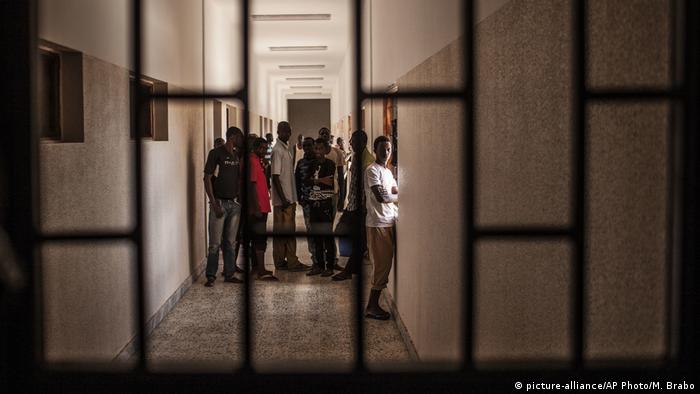 The Libyan coastguard rescued about 10,000 refugees stranded at sea in the first of the year, the German government said Wednesday.

The Foreign Ministry response to an inquiry by the parliamentary party of the opposition Left party was seen by newspapers belonging to the Funke Media Group.

The European Union has been pressing Libya to do more to prevent migrants reaching Europe.

But the migrants intercepted by the Libyan coastguard often end up at so-called "detention centers," in which the Foreign Ministry admitted "partially inhumane" conditions prevail.

Human rights groups have voiced concerns about the treatment meted out to refugees at the detention centers along the Libyan coast. People at these centers, many of which are unofficial, are subjected to torture, sexual violence and forced labor, they say.

The United Nations is aware of 20 official detention centers, controlled by the Libyan unity government. Some 8,000 to 10,000 people  currently live there.

"By cooperating with the so-called Libyan coastguard, the German government and the EU are watching on as refugees are brought back to inhumane conditions," said Left party lawmaker Ulla Jelpke.

The German government did not respond to questions about the human rights situation at the Libyan detention centers and the alleged links between the coastguard and organized criminals.

The UN refugee agency said the 162 refugees were "vulnerable" and faced abuse in Libya. The UN hopes to find third-country homes for thousands of migrants stranded in Libya. (24.12.2017)

Thousands of people fleeing conflict and persecution have been detained by Libyan authorities. The UN refugee agency's chief has called for them to be freed as the agency boosts its presence in the North African country. (21.05.2017)