The UN has accused the EU of "turning a blind eye" to brutality faced by migrants in Libya. It follows a report from Doctors Without Borders that made similar claims. 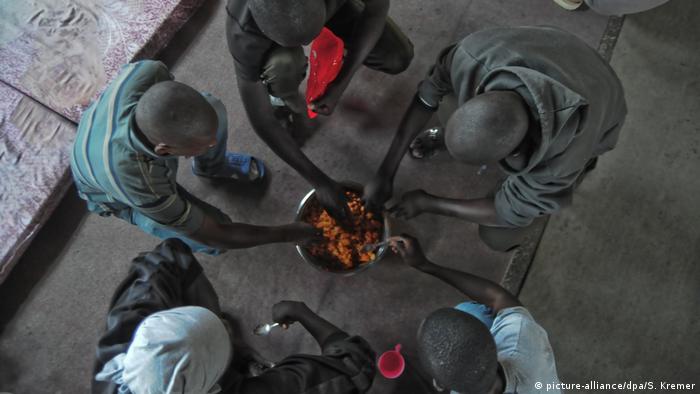 UN human rights chief Zeid Ra'ad Al Hussein said hundreds of thousands of migrants were suffering at the hands of authorities in Libyan detention centers, adding that the situation had been "appalling" during dictator Moammar Gadhafi's rule but had turned "diabolical" since he was ousted in 2011.

"Some migrants die of thirst, hunger or easily cured illnesses, some are tortured or beaten to death while working as slave labor, others are just casually murdered," Zeid said, going on to detail these and other abuses — including the rape of women "in some cases, every night" — in Libyan detention centers.

Zeid's office published a report in December 2016 on abuses faced by migrants in detention centers in Libya, "but memories are short when facts are inconvenient," he wrote. Since then the situation had worsened, with far too many allegations to verify and reports of bodies "in the desert, in the forest, on the beaches."

Doctors Without Borders (MSF) President Joanne Liu on Thursday published an open letter describing "the horrific situation" for refugees and migrants in detention centers. Libya's detention of migrants "must be named for what it is: a thriving enterprise of kidnapping, torture and extortion," she wrote in a letter to European governments.

The EU has struggled to come up with a clear answer on how to deal with migrants fleeing war and poverty in the Middle East and Africa, although on August 28, the leaders of France, Germany, Italy, Spain, Chad, Niger and Libya agreed a plan to tackle illegal human trafficking and support nations struggling to contain the flow of people across the desert and the Mediterranean Sea.

Zeid said efforts to stem the flow were a "failure" because they do not deal with the "human calamity."

Italy in the thick of it

Italy and the EU have been financing, training and providing aid to Libya's coast guard to stop smugglers from taking migrants and refugees in boats across the Mediterranean to Europe. Immigrants are then sent to detention centers.

The number of migrant arrivals in Italy fell in July, suggesting the above efforts may already be having an impact.

The Italian government said on Friday it is ready to give money to nongovernmental organizations to improve the living conditions in Libya's migrant camps.

Some €6 million ($7.2 million) have been allocated for the plan, to be distributed "very shortly, within weeks," Deputy Foreign Minister Mario Giro told the ANSA news agency on Friday.

Some have accused Italy of also striking secret pacts with militias and former traffickers.