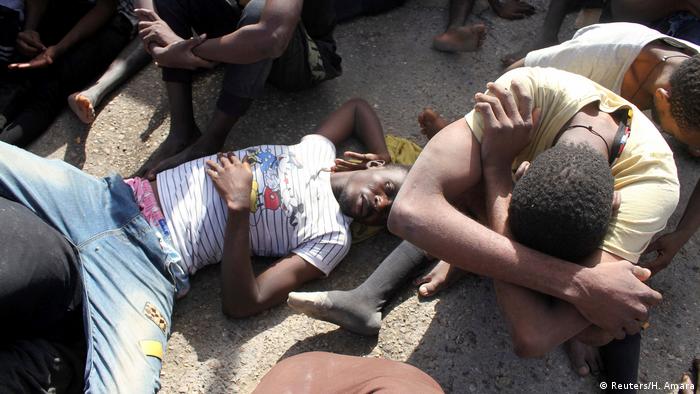 The European Commission is considering a plan for a "disembarkation scheme" that would see migrants picked up in the Mediterranean taken to sites in northern Africa to have their asylum requests considered.

EU Migration Commissioner Dimitris Avramopoulos on Thursday said those leaving North Africa's shores for Italy and Spain in unseaworthy boats could be returned to from where they set off, for rapid processing.

He said although there was, as yet, no agreement from North African countries to the proposal, Brussels was keen to intensify cooperation in the region, in particular with Algeria, Egypt, Libya, Tunisia, Niger and Morocco.

The scheme could even be adopted in non-EU countries in Europe like Albania, he said.

The EU, the United Nations and the International Office for Migration have already been working with Libya to close its 'inhumane' migrant camps, and help the detainees return to their home countries.

Responding to concerns that migrants might be kept in terrible conditions, without the same asylum rights as they would have in Europe, Avramopoulos replied: "I want to be very clear on that. I'm against a Guantanamo Bay for migrants."

His comments referenced the US naval base at Guantanamo Bay Cuba, where hundreds of terror suspects were held for years on end, in harsh conditions.

Avramopoulos said the UN agencies would ensure the centers are safe places for refugees to stay. Those genuinely fleeing war or persecution would be given a chance to settle in Europe, while economic migrants would be returned home in dignity and with enough resources to restart their lives, he said.

The bitter division within EU states over migration came to the fore again last week when Italy refused to accept a boat carrying 630 rescued migrants, without more help from other EU member states. The boat, which also carried pregnant women and children, eventually landed in Spain.

Italy, Greece and Spain bore the brunt of migrant arrivals during the 2015/6 European migrant crisis because EU asylum law stipulates that they must be processed in the country where they first arrive — most likely one of the EU states with a Mediterranean coastline.

Two years on, the number of migrants arriving in Europe is set to be half the figure reached last year, at around 80,000, the UNHCR has said. The refugee agency said a crisis of political will remained despite the falling numbers of migrant crossings.

The migration issue is also straining Germany's government coalition, with Interior Minister Horst Seehofer giving Chancellor Angela Merkel until July to find a solution to illegal migration at the EU level before he orders border police to start turning away some groups of refugees.

On Sunday, 10 EU leaders, including Merkel and Italian Prime Minister Giuseppe Conte, are to hold crisis talks, ahead of the EU leaders' summit on June 28-29 summit which is likely to see the bloc commit to bolstering its external borders.

Donald Trump claims Germans are turning against government over migration

The US president has waded into the ongoing standoff between Chancellor Angela Merkel and her interior minister over migration. But his claim that crime in Germany "is way up" doesn't tally with official statistics. (18.06.2018)

The number of people claiming asylum in Germany fell to 222,560 last year, according to European Union figures. The data could provide some relief for Chancellor Angela Merkel as she fights to save her coalition. (18.06.2018)