Donald Trump claims Germans are turning against government over migration

The US president has waded into the ongoing standoff between Chancellor Angela Merkel and her interior minister over migration. But his claim that crime in Germany "is way up" doesn't tally with official statistics. 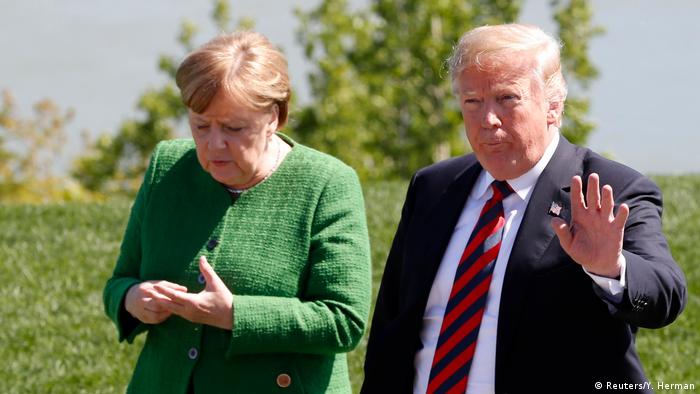 US President Donald Trump on Monday claimed that Germany's leaders were losing the support of the public over the migration issue.

His untimely comments come amid a deepening split between German Chancellor Angela Merkel and the leader of her coalition ally, Horst Seehofer, over asylum policy and border controls.

Trump told his Twitter followers: "The people of Germany are turning against their leadership as migration is rocking the already tenuous Berlin coalition."

The US leader went on to say that "Crime in Germany is way up" before adding that there had been a "big mistake made all over Europe in allowing millions of people in who have so strongly and violently changed their culture!"

In a warning to the American electorate, Trump warned: "We don't want what is happening with immigration in Europe to happen with us!"

Trump's comments are certain to irk German ministers, especially as Europe's largest economy recently reported the lowest crime figures in more than 25 years. The number of crimes fell almost 10 percent in 2017 over the previous year. A 22 percent reduction in non-German suspects was also noted.

Separate studies suggest that Iraqi and Syrian refugees in Germany are less likely to commit crimes, as they don't want to spoil their chances of obtaining asylum.

More than 1.6 million people have sought asylum in Germany since 2014, according to the federal statistics office. Most of them, fleeing conflicts in Syria, Iraq and Afghanistan, arrived at the height of the 2015 migrant crisis.

"As the American ambassador has done previously, Trump is trying to sway the domestic political debate in favor of right-wing conservatives and populist elements in Germany," he told DW.

"We will not change our constitutional principles and precepts of European cooperation learnt from history to align with the 'America First' policy in Washington."

Mützenich's remarks were in reference to the new US ambassador to Berlin, Richard Grenell, who earlier this month was accused of breaching diplomatic protocol by publicly supporting right-wing politics in Europe.

Trump's comments come at a tricky time for Merkel. The German chancellor has been at odds over migration policy with Seehofer, her interior minister and leader of the Christian Social Union (CSU), the Bavarian sister-party to her conservative Christian Democratic Union (CDU).

The two parties came close to a split in their longtime alliance last week, after Seehofer announced plans for Germany to introduce stricter asylum laws, which would include turning migrants away at the border.

Merkel has convinced Seehofer to wait until a European summit takes place at the end of the month, where she aims to push through EU-wide migrant reforms.